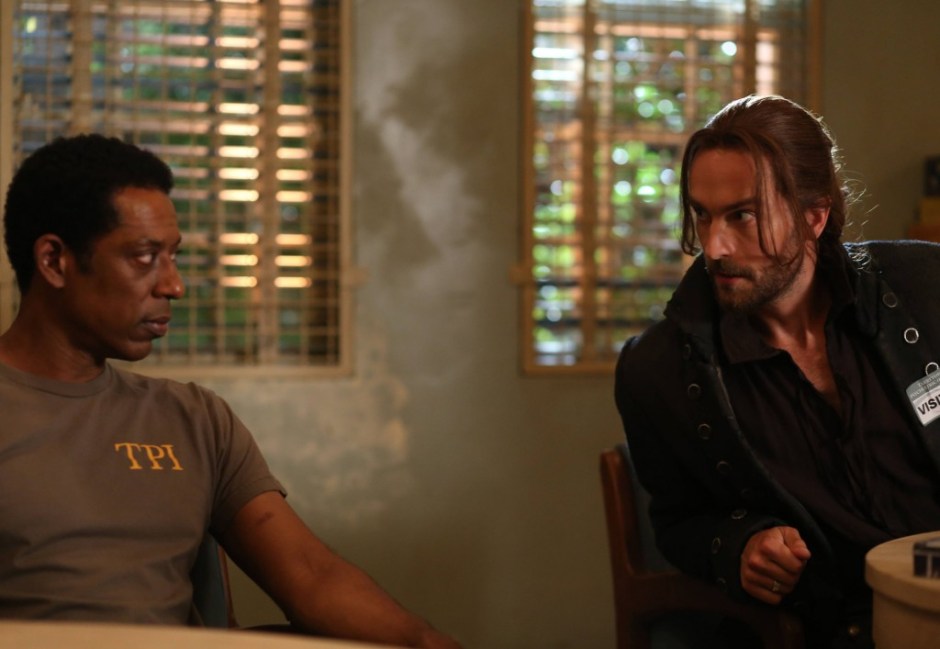 Theme:  Sudden betrayal, the latent darkness which lurks within all of us and the seductive power of money.

Crafty Devil: Henry engages in arts and crafts, whittling a replica of the village. Abbie and Ichabod drop by Tarrytown Psychiatric to see Captain Irving. (Crane doesn’t exactly blend, the nurse assumes he’s being admitted.) The partners find they’ve been barred from the visitation list by Frank’s lawyer — Henry Parrish. Hearing that Henry taxied from the hospital to Sleepy Hollow Savings and Loan, the Witnesses head for the bank.

Past Tense: As Jenny is released from jail, Sheriff Reyes warns her not to continue the pattern of being locked up, cautioning against ending up like her mother. Jenny is angry that Reyes knows about her mom’s time at Tarrytown Psych.

Quotable Ichabbie: Crane and Lieutenant Mills are outside the bank when they spot two men holding hands as they dine.

Ichabod: Is that considered acceptable now?
Abbie: Oh… lots of attitudes have changed since your days. Not everyone’s, but Supreme Court has upheld the Constitutional right of same-sex couples. And more and more states are even legalizing gay marriage.
Ichabod: I meant gentlemen wearing hats indoors. I know about homosexuals, thank you. I trained under Baron Von Steuben. His affections for his own sex were well known Also, I watched the finale of ‘Glee.’

Not so-small-change: After Henry exits the bank, a shot rings out; Abbie charges in with gun drawn. The shooter is Lydia Galway (Joy Jacobson), with whom Abbie is on good terms. While Abbie negotiates, Reyes arrives and guns down Galway, upsetting Lieutenant Mills. The security footage shows Henry trading coins for cash. Galway handled the coins. The sleuths didn’t notice Dave Webster (Sean Goulding) leave the bank with the same kind of coin. Ichabod tells Abbie it was only after Benedict Arnold (Scott Poythress) was exposed to those same coins that he turned traitor…. The Headless Horseman gripes that Henry didn’t tell him of the scheme. Katrina, the most obvious eavesdropper of all time, spies. The witch has planted a seed of doubt in Headless, who questions his confinement at the Willow Point (now called Dobbs Ferry) carriage house, while Henry comes and goes and resides in the comfort of his birthplace, Fredericks Manor. The Sin Eater tells him to take it up with Moloch. 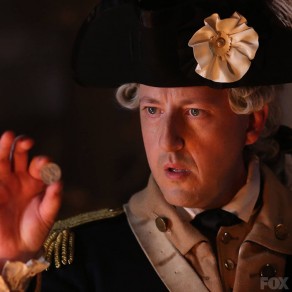 Family Drama:  Katrina tries to appeal to Henry, calling him by his birth name, Jeremy, he’s unmoved…. At the archives Jenny tells her sister and Crane that she can’t focus on the Apocalypse because she’s doing community service. It’s alarming to think that covering up graffiti can take precedence over the End of Days, but C‘est la vie. She suggests they consult her friend Nick Hawley. Jenny surreptitiously logs on to Abbie’s computer to break into Sheriff Reyes’s personnel files. Jenny’s blames Reyes for sending their mother to the psychiatric hospital, and the sisters ending up in foster care. Abbie reminds Jenny that their mom was unstable and tried to kidnap them before committing suicide. Jenny storms off. 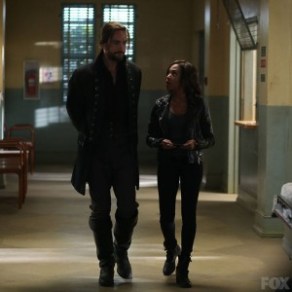 Ichabod and Abbie have money troubles.

Mo Money Mo Problems: Abbie and Ichabod visit mercenary Hawley, who agrees to find the coins which he identifies as Tyrian shekels. Ichabbie realize that Benedict Arnold and Judas Iscariot turned after exposure to 30 of the coins. As they talk, there’s an explosion at a flower shop. It was set by coin-carrying Dave Webster to kill his dad. When the partners head to the Sheriff’s Department, Reyes calls Abbie on accessing her files. Ichabod runs into a hostile Henry, who has swiped the coin Dave was carrying from the evidence room. To make matters worse, Reyes catches Crane, whom she fired last week. She notes that there are no records of Ichabod and he’ll be in trouble if he doesn’t produce identification. Not to throw shade at Captain Irving, but he should have looked into this…. At her community service gig, Jenny finds a Judas coin left by Henry and mutters, “Time to even the score and take her out.”… Ichabod and Abbie meet Hawley at a bar where a frustrated Ichabod can’t imbibe without ID. This is a tough bar, Crane does not look to be under 21. On the other hand, it’s always flattering to be carded when you’re over 21. Hawley reports that Jenny’s toting a high-powered rifle. Ichabbie suspect that Jenny intends to kill her sister. Hawley points out that if they grab the coin, it will affect them, but there is a solution, consecrated glass. Crane and Hawley go to a church where Hawley pilfers stained glass. Abbie, meanwhile, discovers that her sib is hunting at Sterling Forest. Bad move for a parolee. Also bad, Sheriff Reyes is in the forest.

Trust Issues: Abraham is surly with captive Katrina. He tells her not to pursue a relationship with her son, he’s  beyond her reach. Katrina stirs the pot by insinuating that she and Henry share a bond.… It’s clear that Abbie is over Katrina, Ichabod can tell and is bothered. She says that though Katrina is his wife, she’s Henry’s mother and won’t likely turn on her son.

Good Deeds: Abbie, Ichabod and Hawley get the cursed coin away from Jenny before she can shoot Reyes…. At Tarrytown Psychiatric, Ichabod pretends he’s visiting someone other than Irving, who spots Crane in the community room. Ichabod informs Frank that his lawyer Henry is Ichabod’s son aka The Horseman of War. Frank counts on Henry to get him released…. Reyes gives Abbie a file on her mom which refers to demons. Abbie concludes her mother wasn’t insane: Moloch pushed her into the darkness. She realizes that her mom was trying to protect her daughters…. Hawley tells Crane and Mills that he’s keeping the coin and looking for the full set to sell. To make up for it, Hawley gives Ichabod a fake ID to present to the Sheriff.

Cliffhanger: Irving gazes at Henry’s business card, for Parish and Cypher law firm. Okay first of all, he’s listed as both Parrish and Parish, but okay, Show Secondly, cool Devil’s Advocate move there…. At Fredericks Manor, Henry magically burns the bed he was born in.

Now that Ichabod has devoted his energies to releasing Abbie from Purgatory, this show needs to add Biz Markie’s “Just...