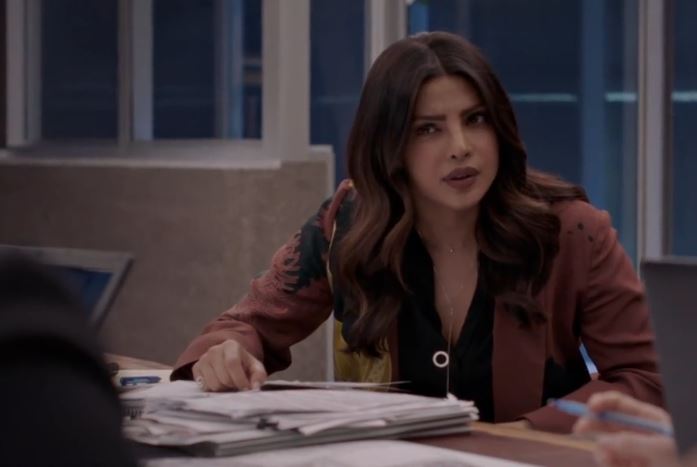 President Haas has resigned, leaving Henry Roarke to take her place. Clay follows in his mother’s footsteps and leaves the team in Owen’s hands. Now that the group knows Alex is undercover, it’s time for them to work together and take down the Collaborators from the inside.

Roarke has been in office for a week and has already signed more executive orders than any other president. Ugh. Roarke also wants to call a Constitutional Convention, the first one since the Constitution was originally drafted. Oh boy, the balls on this guy.

The money and all surveillance information the team gathered on the Collaborators has disappeared signalling that they’re ready to launch their final plan. Unfortunately the team is in shambles with just Owen, Shelby and Alex. But luck is on their side! While Raina and Ryan pout about their situation, the gang recruits Miranda (FBI), Matthew Keyes (CIA) and former FBI trainee and master hacker Will Olsen to help them.

The “B Team”, as Ryan calls them, gets right to work. Will discovers a technology created by Christmas Kelley (Money) was part of a recent plane crash. That technology is being placed into multiple planes nationwide. This could allow the Collaborators to remotely take over a plane’s controls, creating a massive terrorist attack larger than 9/11.

On cue, Raina and Ryan come in stating they’re done with their “time-out” (lol) and want to help. About time guys…. The team learns the code to overtake the plane technology is hidden within Peter Theo’s (Technology) recent “Fun Friend” app that thousands of people have. The Collaborators are targeting planes with Muslim passengers to frame them for the crashes just like they framed Raina for the mall bombing. This attack would align with Roark’s executive order for a Muslim ban in the country.

Alex is at the Collaborators’ headquarters with Alice Winter getting information about the specific planes. When Alice wouldn’t divulge the exact passengers and planes targeted, Alex knocks her out and snaps a picture of the data, sending it to Matthew and Ryan who are running point from the bunker. Alex tries to escape but Alice blocks the exit. After a few kicks and punches thrown, Alex leaves Alice handcuffed to her desk.

Will, Miranda and Owen are at the nearest airport where they try to ground the six planes in jeopardy. They’re too late and all of the planes are in the air. As control tries to contact the planes to make emergency landing, the team realizes that someone has taken over the channels: a Collaborator.

Meanwhile, Shelby finds Clay passed out drunk in a hotel in the middle of Virginia. She learns that Maxine broke off the engagement – leaving him in a heap of sadness. Done with his mess, Shelby doesn’t care and just needs Clay to get the codes that will ground the planes. After a lot of whining and a failed attempt to kiss Shelby, Clay comes through with the code.

Will locates the people interfering with the pilot’s signals and sends Miranda and Owen to take them out. With the codes from Clay and the data from Alex, the team is able to successfully land all the planes and destroy the hacked phones from the innocent Muslim passengers. Take that Collaborators!

Shelby tells Clay to take off his “pity pants” and come back to the team. Clay takes that as an invite to try for another kiss but it’s thwarted when the FBI comes banging on the door. They’re not the only ones the FBI is looking for as the agency visits the Farm and takes the rest of the team to see the president, which is worse than being arrested.

Instead of condemning them to jail or even death, Roarke brings the team in front of reporters and praises them for their good work in thwarting a terrorist attack. He paints them as heroes with the CIA and FBI working together “in the shadows to keep America safe.” Even though he was behind the possible attack, the team’s success just made Roarke look even better in the eyes of the American people. Awesome.

It seems that no matter what the team does, Roarke will always be the good guy. Because of his united display with the team being the face of future change, multiple states have agreed to a Constitutional Convention with changes that will possibly merge the CIA and FBI and also change the face of America forever – the Collaborators plan all along.

The team has 100 days until the Convention to figure out a plan to take them down once and for all. Alex with the dramatics, asks the team the most important question to date, “who wants to be a terrorist?”

The team has been exposed, President Haas might get impeached and Alex has turned to the dark side. Well, that’s...