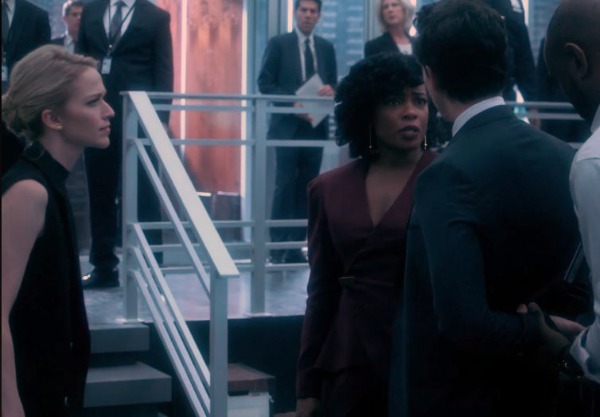 Ryan is M.I.A., Alex was left to die and the other CIA recruits are being held hostage. That means the fate of the nation rests with Shelby as she attempts to unmask the real puppeteers hiding within the FBI.

This Week’s Flashback: Alex learns that Miranda and the others don’t trust her abilities anymore and they want Ryan to go solo. Apparently, Alex is a distraction — I could’ve told you that. Since she hates being the weak link Alex swears she can gather information on Owen. That starts with her finding out what’s behind a false wall in Owen’s house.

Later, the class gets together for a friendly game of ‘Darts and Tell’ at the bar. If you don’t hit the bullseye you tell a deep personal secret. Sounds like an awful game for a bunch of spies. But the game does foreshadow this week’s lesson: interrogation techniques.

Owen tortures each student with various methods like loud music, sensory deprivation, extreme temperatures and even forced stressed positions. Sign me up for this fun class.

There’s a saying that goes ‘don’t dish it out if you can’t take it’ and Owen proves that. He offers himself up to see if the recruits can break him. Their mission, get one of his aliases. After 32 hours of torture, Owen hasn’t budged. That’s when Ryan asks Dayana for suggestions. Apparently she knows a thing or two about torturing.

Dayana says the best way to crack someone is to hurt something they care about. So the recruits grab Lydia and waterboard her. Let’s just say Owen cracks like an egg on hot pavement.

During the torture session, Alex snuck away to Owen’s house to prove her worth. Inside a trap door, she finds a laptop and six phones. Before she can figure out what they’re for, Lydia comes to crash the party. Luckily, thanks to Alex’s new allegiance with Harry, he stalls Lydia long enough for Alex to escape. I see a new partnership brewing here — and I like it.

When Alex meets with Shelby she gets an earful for not taking a phone. That’s the turning point in their agent-handler relationship because Alex is slowly iced out not only by Shelby but Ryan and Nimah, too.

So what does Alex do? She goes back to the bar and grabs a burger with Owen who praised her for caring for him during his torture. [She was against using Lydia to get information.] This moment raises a red flag: Owen shows that he might care more than he wants us to believe, leading me to think he’s not behind the AIC.

But you know who might be the newest member of the AIC? Ryan. He wakes up in the middle of the woods with an empty syringe and a ringing phone. When he answers, all he hears is, “You’ve been selected.”

The Week’s Present: Right off the bat, Alex dislocates her shoulder to free herself after being tied up. Then, like a badass, she shoves it back in place. The present is starting off with a bang!

Alex still has the terrorist’s phone, but its battery is at one percent. She calls Miranda, but no answer. She then calls Shelby, but the phone dies as Alex is giving her the other phone number. A partial number is better than no number and Shelby is on the hunt to uncover Miranda once and for all.

Right as the phone dies Alex is hijacked by the terrorist. She is taken to a room and tied up. Then some guy named Mike is thrown in front of her. He pleads with Alex to give the terrorists information; she shuts poor Mike down because she believes he’s one of them. When the terrorists enter with torture tools she plays it cool, thinking they won’t kill Mike. Spoiler: they kill Mike.

Then comes Dayana. The two promise they’ll stick together through the torture because this is what Owen was training them for. Right? Kind of. Dayana takes a few knives to the arms and that doesn’t faze her. It’s when they threaten to break her spine that Alex calls it quits.

She ‘rats’ out Lydia saying she has the drives and her phone. Alex tells the terrorists to turn off their cell signal jammer to locate her. At first, you think Alex has cracked, but I know this girl is smarter than everyone in that building.

At headquarters, Miranda is sweating it out in her office thinking she’s about to be discovered. But there’s a trick up her sleeve. She calls side-bae Paul into her office and uses her charm to slip the phone into his briefcase without his knowledge. On his way out the FBI pings it and, well, Paul takes the fall. Way to be the world’s worst girlfriend Miranda.

Back in the torture dungeon, Alex is in the middle of apologizing to Dayana when Leon, Harry, and Sebastian break through the doors. Finally, something good happens! Their next move is getting to the medical bunker for Dayana’s sake. Harry hands Alex a gun and her famous last words are “I’m tired of playing nice.”

Ship of the Week: Nimah is pimping Shelby out as ‘Jane Foster’ so she can get more information out of Leon. Much to my dismay Shelby loves the action and can’t pass up the opportunity to be an undercover agent again, so of course, she agrees to use Leon. *Sigh* Why do you have to ruin a good thing Nimah?

Will exposed himself last week when he sided with Miranda and the terrorists. The deception and lies keep coming this...