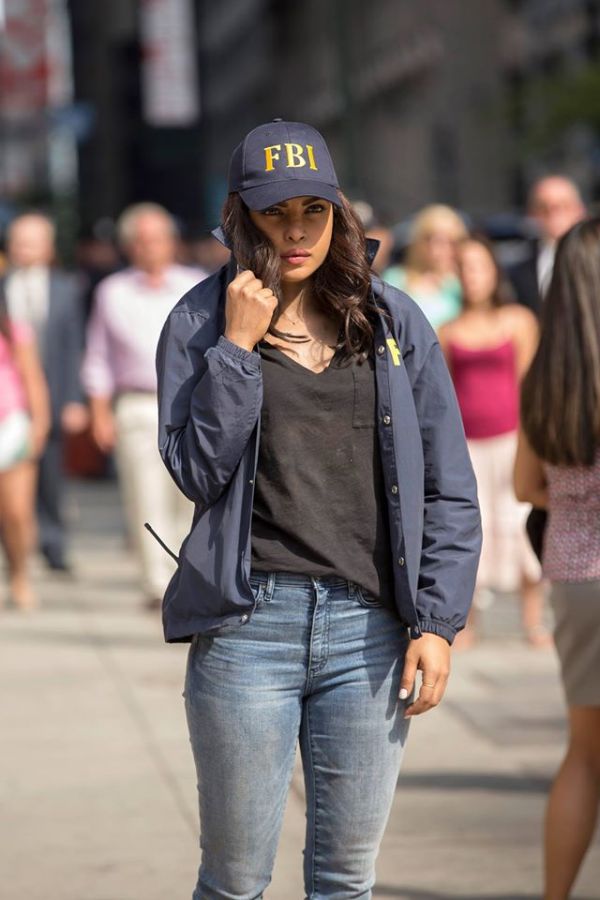 Whooooooo! Quantico debuted on Sunday night. I’ve been waiting to see this show ever since the trailer was released months ago. The premise is about a group of good-looking FBI recruits, who live together and romance each other at Quantico. One of the recruits is suspected of coordinating the biggest terror attack since 9/11. The timeline alternates between the early days at the training facility and the aftermath of the attack, which will strike eight months in the future. Quantico is a cup of Homeland blended with Melrose Place and served on a bed of How to Get Away with Murder. Yes, someone said, “Hey, what if we did a sexy, soapy show about terrorism?” Works for me. Let’s go!

The opening scene depicts Alex Parrish (Priyanka Chopra) awakening in the rubble after a terror attack near Grand Central Terminal. The next shot is eight months earlier. After we hear Massive Attack’s Paradise Circus, we get an airborne meet-cute with the flawless Alex and attractive stranger, Ryan Booth (Jake McLaughlin). They make up stories about who they are and the next thing you know she’s bouncing about on his lap in a rental car. Reverse cowgirl, if you must know. As far as Alex is concerned, this is a one-and-done, so it’s probably just as well that they didn’t use their real names. It’s not like they’ll ever see each other again. Oh, wait, they are both trainees. Never saw that coming.

Alex and Ryan: We already know that Alex is “the headstrong, independent beauty” and Ryan is “the attractive easy-going guy drawn to the headstrong, independent beauty.” Will they have a complicated banter-filled relationship in which he tries to crack her impenetrable shell? You’ve watched TV before you, know the answer. The flawless Priyanka Chopra is far too beautiful for a government job. She should play a movie star, who also happens to be the princess of an exotic French principality. In other words, Alex Parrish should be Princess Grace Kelly of Monaco or at least a parallel universe version.

Shelby Wyatt (UNReal’s Johanna Braddy) is all by herself in a Georgia mansion with an extensive gun collection. Where is everyone? Shouldn’t her family be there to give her a send-off? Or at least a Downton Abbey-style queue of servants? Shelby looks sad, poor Shelby. Shelby is the requisite poor, little rich girl.

Simon Asher (Tate Ellington) is a New Yorker, he’s scruffy and poorly dressed. Let’s all assume that Simon lives in Williamsburg and is no stranger to ironic T-shirts and pumpkin lattes. Simon wears glasses, so obviously he is a tech, geek. He is also gay. Or at least that’s what he says, the official cast bio is very cryptic, so I don’t know what that’s about. Maybe it means that he doesn’t drink pumpkin lattes, and if he refrains from the trendy seasonal madness that makes up for him probably living in Williamsburg.

Caleb Haas (Graham Rogers) is the glib, good-looking entitled screw-up. He calls a Mormon recruit Romney and labels a blonde Southerner Taylor Swift. There always has to be one. Deep down, he’s probably sensitive, right?

FBI Honcho Miranda Shaw (Aunjanue Ellis, who played Lori Mills on Sleepy Hollow) is the Black Lady In Charge. Let me guess, she will be , ruthlessly demanding of her recruits, masking a deep caring for them? She will also have some sort of intriguing backstory and some sort of relationship with Deputy Director Liam O’Connor (Josh Hopkins), who wouldn’t even have this job were it not for her.

Eric Packer (Brian J. Smith) is an eager Mormon. He takes a moment to look at a photo of himself with some African children and a shadow passes over his face. He’s not featured on the official cast page. Don’t get attached.

Nimah Amin (Yasmine Al Massri ) is a conservative Muslim. When she stops at an Ohio convenience store to use the restroom, the guy behind the counter takes a look at her hijab and claims the restroom is out of order. It’s essentially the kind of scene you get in any Civil Rights-era movie when a black character tries to check-in at a hotel, get served at a restaurant or EWB — exist while black. 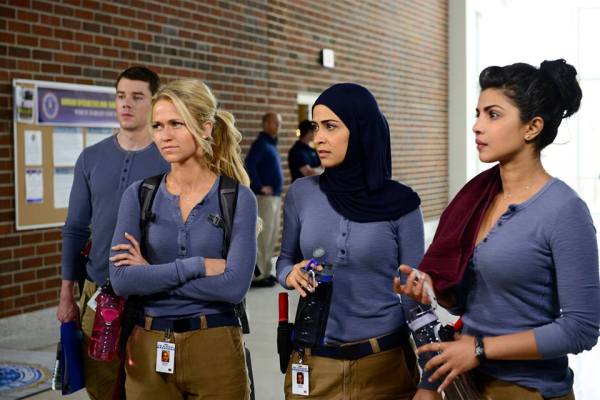 Everybody lives together at Melrose Place. The first assignment is to pick a fellow recruit’s file and learn what they are hiding. If you fail, you go home. The interrogations will be observed by fellow students and Liam.

Obviously, Ryan wants to learn about the stranger he just had sex with, so he grabs her file, Simon lurks around Nimah. It’s weird how he notices that her door is closed for modesty — because of her religion — but then barges in. He also notices that she doesn’t always tie her hijab the same way and is ambidextrous. That’s not his actual case study, though, he is officially profiling Shelby and ascertains that both of her parents died in a plane crash on 9/11.

Nimah reveals that Simon is not only gay — which everyone knows — but he is also a virgin because he didn’t have sex with this last four boyfriends. That is not a serious investigation. So Liam is done with her. Oh wait, that wasn’t the real secret. He’s hiding the fact that he is a conservative Jew who secretly traveled to Gaza to live with Palestinians. Well done, Nimah.

Ryan questions Alex, based on her casual attitude about car sex, he knows she has an inability to form an emotional connection with men. A flashback reveals that her father was violent and harbored some big secret and he abused her mother. Alex’s mom presumably shot him in self-defense.

Caleb, who doesn’t appear to be good at anything, keeps harassing Packer, saying that he knows what he’s hiding and it’s a biggie. The Mormon reacts by sweating profusely. When it’s their time to go into the interrogation room, Eric blocks the door, kills an extra, overacts — he might as well, it’s his last scene — and confesses to having sex with an African girl, who died while undergoing an illegal abortion. He then eats his gun. The FBI’s vetting process is seriously lacking. It turns out Caleb didn’t know any of this, he was just bluffing because he sucks at this and only got recruited because his parents are agents. In addition to conducting lazy background checks, nobody breaks into the room until the Exposition Fairy has fluttered away.

Welp, no more surprises in this episode except Nimah isn’t just keeping her door closed because of traditional modesty, it turns out that there are two Nimahs in that room and Head Honcho Miranda knows this and the hijab will from now on just be tied to the right. The hell?

No more surprises after that, except that Alex tells Deputy Director Liam O’Connor that she is the one who killed her dad and maybe he worked for the agency and that’s why she’s there, even her mother doesn’t know she enrolled. Oh, and O’Connor ordered Ryan to meet and watch Alex, but he wasn’t supposed to let her do the reverse cowgirl, so no more car sex.

That’s all you need to know, except that in the future, Alex will be accused of the terror attack and Liam will act like he thinks she’s guilty and as she is dragged crying from the station, Miranda will go all Blacklist and commandeer an FBI van to get Alex away from the scene. This is a big conspiracy and Alex must figure out who the traitor is so Miranda gives her an FBI hat so that Alex can escape through the crowd because none of them will notice Princess Grace Kelly walking all slouch-shouldered away from the action.

We’d like to read your witty and astute comments, please leave one below. They don’t appear right away, but we promise we’ll get to them.