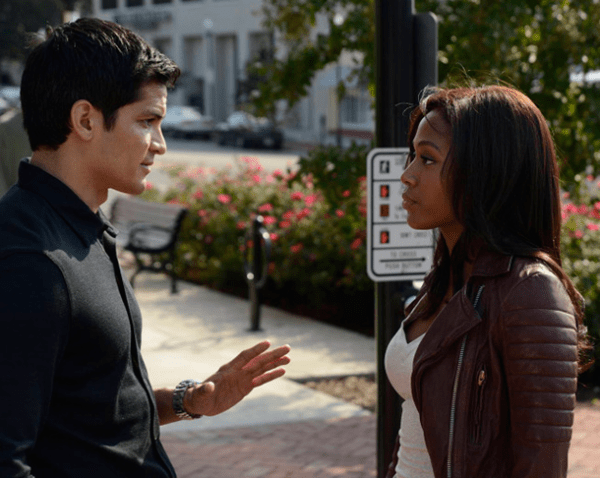 The Headless Horseman is back in Sleepy Hollow and he’s raising hell, so to speak.The episode is filled with references about how Paul Revere’s Midnight Ride figured into the equation and some plotline about an important password “Cicero,” which will shed light on how to defeat the Horseman. It all seems significant at the time, but the only thing you really need to know is that Ichabod and Abbie crack the code and figure out the Horseman’s vulnerability. Now let’s focus on how Lieutenant Abigail Mills is pint-sized perfection and how all the boys love her. Let’s go!

To reiterate, Abbie Mills is pint-sized perfection. We all know it, and so does just about any male character who crosses her path. Her ex, Luke Morales is lurking about on the sidewalk to chat her up when she’s busy. He’s relieved to see there’s no damn, sexy hobo around, saying: “Come on, I just wanted to talk to you without having the Brit hovering over my shoulder.” Look, Luke, stop trying to make #Labbie happen. It’s never going to happen. Well, maybe it could have happened, but Luke was only in six episodes and eventually disappeared without a word. Poor Luke also has to deal with some crazy talk from Officer Andy Brooks. It goes like this:

Andy: I saw you talking to Abbie, stay away from her.

Luke: Egads! Aren’t you supposed to be dead?

Andy: Well, technically, but Abbie gives me life. I could get lost in those doe eyes. Look, just stay away, I’m protecting her. Something wicked this way comes.

Luke: I already have to compete with a damn, sexy hobo and his sidelong glances, now I have to fight with the undead?

Luke Googles some info on the undead. He really does not have the constitution for this kind of thing. He turns ashen and dodges Abbie’s calls. That kind of wimpy behavior is why you don’t get to be part of a ship, Luke.

Ichabod Crane would always pick up when Abbie calls, even. He doesn’t have the hang of voicemail, but he tries and leaves a message about the Freemasons‘ stance against women attending their meetings.

“Dear Miss Mills, I trust this voice mail missive, finds you well if it finds you at all. I’m still trying to fumble the notion that my words are somehow recorded on your ‘Smartphone. ‘ After consideration, I agree it is wholly unjust that you are prohibited from attending the Masons assembly. I will rectify this the moment I arrive. Please join us as we strategize our plan of attack against the Horseman’s imminent arrival. I am, most respectfully, Ichabod Crane.”

See Luke, that’s how it’s done. Ichabod, by the way, makes little comments and nosy inquiries here and there about his leftenant’s relationship with Detective Morales. I see you, Ichabod. You fool no one.

In any case, the Headless Horseman is back, he crashed a Freemason’s meeting in search of his skull. By the time Crane shows up, his allies have been beheaded. He’s damn sexy when he’s enraged. It becomes apparent that the Horseman was looking for his head, so he can get together with the other three Horsemen and hasten the End of Days. To make matters worse, the duo later find that the Horseman strung up the Freemasons’ heads and turned them into Jack O’Lanterns, which is simply a dick move. Abbie, by the way, is unfazed and just grabs one of the skulls without flinching. Paul Revere would certainly have tips on how to take down the Horseman.

At the Tarrytown Musem of Colonial History, Ichabod rants about a tour guide’s apocryphal tales of Paul Revere and Abbie has to pull him away and explain his behavior.

Abbie: Excuse us. My cousin Steve forgot to take his medication this morning. Didn’t you, Steve?

Ichabod: I’m the only one amongst you who doesn’t require medication.

The Horseman’s head needs to be destroyed. Captain Irving is not in the habit of tampering with evidence, but he is also not in the habit of turning a blind eye to a string of beheadings, so he goes to the New York Fish & Wildlife Services where his friend Paul is examining the skull. Irving has his first encounter with the Horseman and a shoot-out ensues. Irving escapes with the skull. Sadly, Paul is a casualty.

Team Witness works on destroying the skull. Ichabod tries a sledgehammer and Abbie attempts to get rid od the thing by emerging it in acid. She looks pretty adorable in the Hazmat suit, but it takes more than adorable to get rid of the skull so it is all in vain. As is the attempt make it explode. 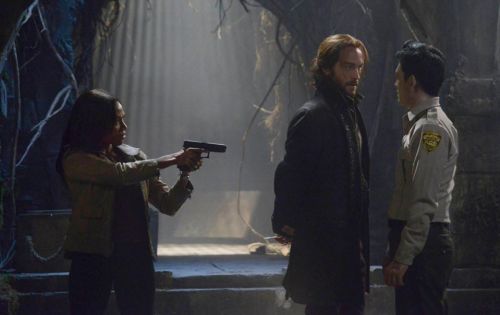 Andy Brooks corners Abbie in a cave, she finds his undead status more alarming than the lantern heads. Andy warns his former colleague that the Horseman is Death can’t be killed, but he can be trapped though Andy doesn’t know how that can be done. Ichabod arrives and a conversation loaded with “Abbie’s mine” subtext ensues. Thanks to Paul Revere’s cleverness, Ichabod is now armed with the knowledge that Headless is powerless until the sun sets, Crane orders Andy to run tell the Horseman of Death to meet him in the cemetery. The duo gets help from Captain Irving. The plan is to lure the Horseman into the Freemason’s mystical cell, which was designed by Thomas Jefferson and is protected by a supernatural barrier. Ichabod goes on about his admiration for Jefferson and is distressed with Abbie and Irving’s news blast about Sally Hemmings. In addition, it turns out that Jefferson took credit for some of Ichabod’s quotes. Them founding father’s ain’t loyal.

The Horseman shows up and chases the Witnesses into the tunnel, Abbie falls and cries out for Ichabod — Psych! It’s all a trick and the Horseman enters the hexed cell.

Cliffhanger:  The Witnesses flood the cell with UV Light and Headless is trapped. Nice!