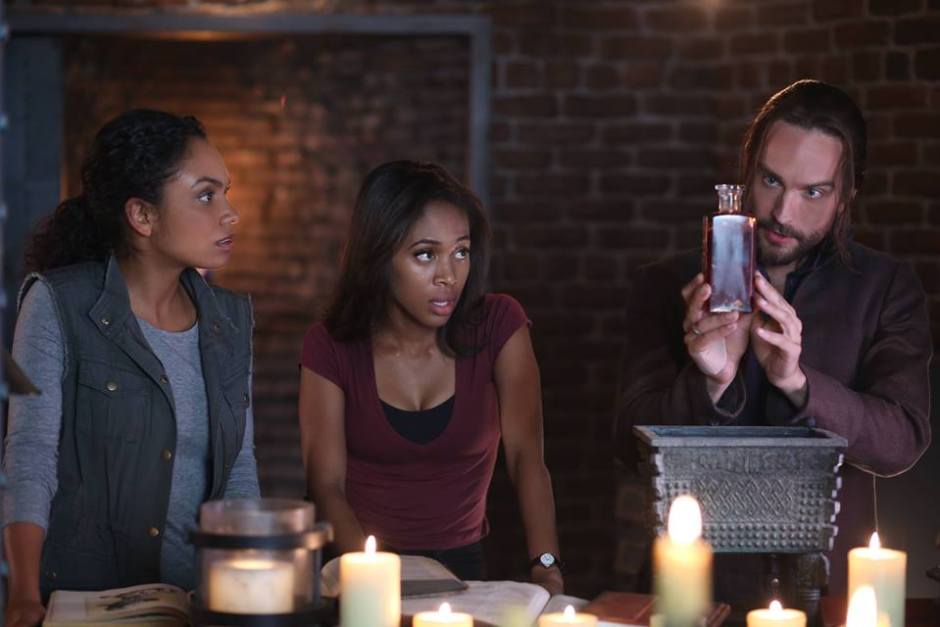 Sheriff Corbin had a son. After serving in the marines, Joe Corbin returns to Sleepy Hollow. He’s been holding on to some bitter resentment.

Exercise in Futility:  An upside down Ichabod insists that he can’t withstand the torture, but Abbie urges him to “Do it for Katrina.” Nope. Ichabod’s done with yoga. He’s also done with ponytails for now and lets his hair down, a good look.

Abbie: We are strengthening our arms, our abs, buns…
Ichabod: Bun…? I find yoga neither soothing nor relaxing, made more uncomfortable still by discussion of my double jugg.
Abbie: What? Okay, for the record ‘double jugg’… is much weirder than ‘buns.’

Bitter Pill: Ichabod admits that he’s still disappointed and hurt that Katrina kept so much from him. Abbie asks what would make Ichabod feel better. That would be a trip to the tavern. Fisticuffs erupt, Lieutenant Mills breaks up the scuffle. One of the knuckleheads is Joe Corbin. Abbie, who, by law, must have a connection to every guest star, summons the exposition fairy: She heard about what happened with his platoon and his honorable discharge. Joe wasn’t at the sheriff’s funeral because either the writers just made up a son for tension — or he was serving in Afghanistan. Either one of those works. Joe cops an attitude with the cop, calling her his father’s “charity case” and blaming her for the sheriff’s death…. Ichabod and Abbie respond to a noise complaint at Pioneer Point where they find corpses with missing entrails. Joe is there muttering: “Dad knew” and “It’s going to kill us all.” Joe can’t focus on the creature because he’s nursing a grudge: He thinks his father favored Abbie over him. This probably isn’t a good time for us to mention the sheriff probably liked Jenny more, too. This complainer needs Jeremy Crane to say, “Aw, poor widdle baby! You think you had it rough?”

To the Point: It’s archive time! Lieutenant Mills looks into Joe’s military records. When his platoon was wiped out, something had hollowed out their organs, only Joe escaped. Ichabod recalls Daniel Boone’s (Robin Strasds) brother, Squire, who suffered from what the Shawnee called the “Curse of the Wendigo.” The man-beast is triggered by human blood and only returns to human form after an act of cannibalism. Joe’s a Wendigo, of course….. The  partners search Joe’s apartment and find the sheriff’s last will and testament which requests that his son protect some rare objects. The documents contain a code which leads them back to Pioneer Point, where Joe has unearthed a box. During a chase, Ichabod gets cut. Joe turns into the horned Wendigo, running on all fours. As the creature is about to make a meal out of Crane, Mills shoots it. The Wendigo winds up in Jefferson’s hexed cell and they call in Hawley for backup. Jenny arrives just as Hawley is making what could be interpreted as googly eyes at her sister. Jenny’s brought a cooler of organs from a fresh cadaver at the med school, as you do. Once fed, Joe returns to human form and says that until the bar fight, he didn’t realize that blood was a trigger. 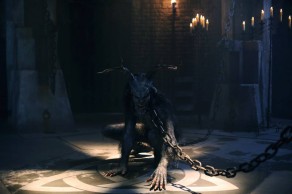 The Wendigo’s having a cell of a time.

Read Letter Day: Joe explains that two weeks earlier in Afghanistan, he received a note in which it was claimed that he’s cursed. The only way to break it is to hand over an item his father left for him. (This sounds like one of those scam emails, but okay, Show) The missive was covered in white powder (anthrax?), which Ichabod realizes is ground human bone hexed with black magic. The return address was Fredericks Manor so it’s from Henry, naturally. The box contain Jincan poison.The deadliest creatures are sealed up together and devour one another until their banes are concentrated into a single toxin. Ichabod apologizes for his son “who is going through a rebellious phase.” Joe asks if Crane loves Henry. Crane says that he does, Joe advises him to tell Henry that. 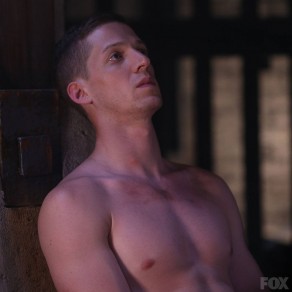 Joe needs a shirt and a new attitude.

Get Well Soon: Abbie learns that if a Wendigo changes four times, it remains stuck that way. Joe has changed three times, so the race is on. Hawley knows some Shawnee with whom he trades, but they’ve had some conflict. Ichabod says that’s because the Shawnee value character over currency. The two men head to a garage that would fit in nicely on “Sons of Anarchy.” Hawley receives a frosty reception from Big Ash (Eddie Spears), but Ichabod impresses the Shawnee, who allow him to meet the shaman…..While Ichabod and Hawley are away, Henry’s goons pick the locks to the hexed cell and Parrish demands the Jincan. Contrary to Abbie’s warning, Joe turns over the poison and leaves with Henry to receive the cure. Henry’s “cure” is to slash Joe’s arm. “The curse is humanity,” Parrish says.

Cut Bait: To lure Joe, Abbie slices her hand in the hopes that he’ll catch the scent. Ichabod refuses to let his “Leftenant” act alone, so he does the same. As the Wendigo gets ready to attack, Ichabod uses the Shawnee cure, does his usual incantation schtick and It works. Afterward, they show Joe his dad’s work. Joe wants to carry on that torch and asks Abbie to write a letter of recommendation for Quantico.

Deal with the Devil: At Tarrytown Psychiatric, Henry tells Captain Irving that he didn’t steal his soul, he “bartered it for services rendered” When Frank dies, Henry will own him. There’s a loophole, Irving can get out of his contract by killing someone. Henry points out his client Gil Everett (Michael Harding), who was arrested three years ago for drunk driving; he’s the man who hit Irving’s daughter, Macey, leaving her paralyzed. A confrontation ensues, Irving wants to know if he’s sorry. It doesn’t help that Everett calls Macey “Marcy” and whines that she ruined his life by being too stupid to get out of the way. Irving lunges, but then realizes he doesn’t want to give in to Henry. Frank calls Abbie to report that he sold his soul.

Cliffhanger: Henry’s use of the Jincan yields a spider, which crawls into the mouth of a sleeping Katrina. Aaaaaargh!

A woman goes to extremes to best her perceived rivals for Ichabod’s heart. The writers toss Ichabbie shippers a bone....