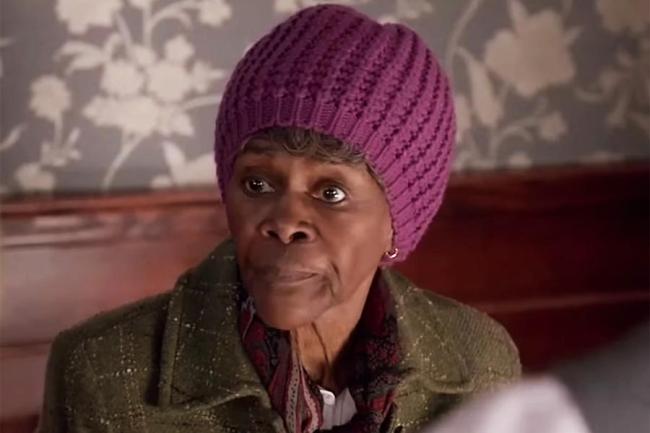 I admitted that I had trouble getting into How to Get Away with Murder, I’ve got my head in the game now.

The Nate Lahey scenes were gut-wrenching. That’s the first time I’ve written the character’s name. I can’t call him Mr. Sexy Cop now, that would be vulgar when the character is strip-searched and humiliated in prison. Billy Brown didn’t have many lines, he didn’t need them; his scenes were quietly powerful. It’s too bad that much of Brown’s interaction with Viola Davis this season were hurried scenes in cars.

And then we get to Cicely Tyson. That was a bit of a mood whiplash, huh? Her introductory scenes took on a ’70s sitcom vibe. It’s Cicely Tyson, she can do whatever she wants.

The arrival of Ophelia, Annalise’s mother, explains a lot. Ophelia is harsh and seemingly resentful of her daughter’s success. No wonder Annalise fled that life. It’s a threadbare trope, but it does speak to Annalise’s determination that she transformed herself into brilliant and accomplished Professor Keating. Yes, she’s a mess, but she’s a brilliant and accomplished mess.

The episode fleshed out Annalise’s backstory. It’s already been established that Annalise had a tragic past Now it’s confirmed: she was raped by an uncle as a child. (So that’s what she was referring to during an argument with Sam when she accused him of seeking out vulnerable and broken women.) Unbeknownst to Annalise, Ophelia eventually avenged Annalise’s rape in a The Burning Bed sort of way. This opens the door for Annalise to forgive some of Ophelia’s many flaws.

Consider this: Annalise would be less screwed up if she’d been raised by Rowan Pope. Olivia certainly has her issues, but she is less haunted and tormented than Annalise. Bear in mind that Rowan orchestrates cold-blooded killings in the name of national security.

So now it looks like Sam didn’t kill Lila. Did an extra kill Lila? Did a viewer kill Lila? Did you kill Lila? Rowan Pope would have wrapped this thing up already. By the two-hour finale, Annaliese will unfurl from the fetal position and get back to being the red-leather jacket Annalise we saw in the pilot. Annalise has got this.

How to Watch How to Get Away with Murder

Hey there, are you late to the HTGAWM party? There's a lot of back and forth on the show, so...