The denizens of Downton Abbey have many skeletons in their closet: from murder to child abuse, now the Crawleys have another issue—haunting. The spirit of the late Lady Sybil has been rattling chains throughout the halls. In an exclusive interview, a Downton insider tells the eerie tale. 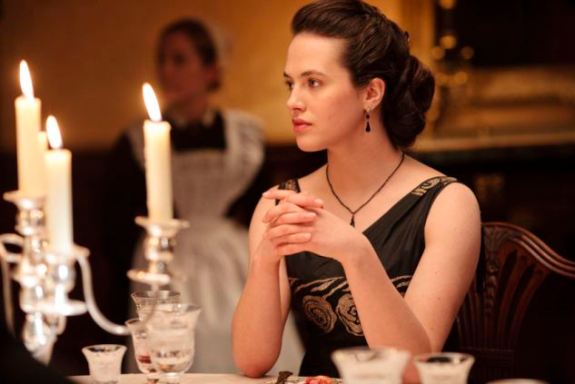 In addition to rumored serial killer, Lady Mary, and poor luckless Lady Edith, there was another daughter, Sybil Crawley. Unlike the rest of the family, Lady Sybil stood up for the working class and had an interest in doing more than looking at herself in the mirror as a maid brushed her hair. Our source says: “Lady Sybil was as kind as she was beautiful and so different from her parents and sisters that it was thought she might be adopted. Her behavior was shocking. Once she went down to the servants’ quarters to ask for lessons on how to boil water. She had unusual notions about being a useful member of society and learning how to take care of herself and others. Lady Sybil actually cared enough about what was going on downstairs to remember the staffers’names. During the war, she worked as a nurse. It was crazy.”

The family was rocked when Lady Sybil fell in love with the chauffeur, Tom Branson. In addition to working for his money, Branson is Irish, which just made the situation more scandalous. Our source tattles: “Sybil didn’t marry for money or status, she actually loved her husband from the get-go. Her parents Robert and Cora Crawley sure can’t say that.”

The progressive poltergeist’s return was made clear during a recent visit from Gwen Harding, a former housemaid who left service behind for a career as a secretary and wound up marrying a prominent man. “Unaware that she was headed back to Downton, Gwen Harding visited with her new husband and dined with the family. Obviously, it was awkward. The Crawleys didn’t know who she was, she only worked at Downton for two years, so it’s not like they would have noticed her or spoken a few words or anything like that.”

Gwen shocked Lord and Lady Grantham with the news that they raised a decent human being. She recounted how Sybil not only bothered to acknowledge or speak to her but also secretly helped her get an interview for a secretarial job. It dawned on Lady Edith that perhaps they should be aware of the staff working and living downstairs. Lady Mary, of all people, confided in her maid, Anna Bates that, Lady Sybil was a superior human being. “No shit, Sherlock,” chuckles the tattler.

The visitation had an impact on the family, the source says: “When an area man, Mr. Mason lost his tenant farm, the Crawleys weren’t keen on helping out, but all the talk about Sybil’s decency moved them and they ended up giving him land to farm so now he won’t end up homeless begging for stale crusts of bread.”

So does this mean the Crawleys have changed their ways for good? “Not bloody likely,” says the source, the spirit of Lady Sybil will probably move on eventually—would you want to spend a lot of time with these people?

Lady Edith has been suffering since the very begin. Her luck has been awful and she's dealt with all sorts...