Drama has struck the denizens of Downton Abbey yet again. At one time, the manor house was the epitome of grandeur but insiders say things aren’t what they once were. Minister of Health Neville Chamberlain paid a visit to the estate recently and the evening is said to have been a complete debacle. 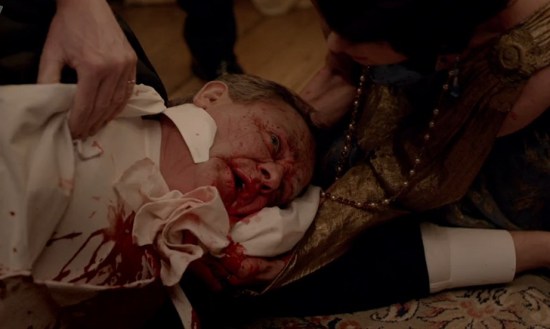 Our source reveals, “Neville didn’t really want to go but the Dowager Countess asked him to come and it’s hard to say no to Violet Crawly so he appeased her. That’s what Neville does, he just rolls over. Can you imagine if he had to handle a crisis?”

From the moment Chamberlain arrived things were rocky. “Lady Violet lunged at him to talk about the handling of the hospital—a subject that’s of little interest to anybody. To make things worse, Isobel Crawley was there and she engaged in the tug-of-war over the issue. Seriously, there are so many other things to discuss. I want to know why Lady Edith’s ward, little Marigold looks just like her. There has been all kinds of talk about that subject.”

It sounds like the quality of life at Downton is slipping. Our tattler reveals, “In the old days, there were so many servants that you could barely count them. I’m surprised guests don’t have to hang up their own coats now. I hear that the handful of staffers who remain are all plotting to get out. One of these days, the Crawleys are going to start organizing potlucks or serving frozen dinners, it’s that bad.”

Though Chamberlain had a rough night, it was even worse for host Robert Crawley. “Lord Robert stood up and just upchucked all over the table. I mean blood was flying everywhere, it was like a horror movie. It was so bad that it even snapped Lady Cora out of her drug-induced haze. She’s barely lucid half of the time so when she reacts to something, you know it’s a big deal. Neville told me he’s never returning again, which is probably for the best. The only Downton guest that’s ever had a worse night was that Turkish chap Kemal Pamuk. There have always been whisperings that Lady Mary killed him so Neville’s just lucky he made it out alive.”

The denizens of Downton Abbey have plenty of skeletons in their closet: from stalking to murder to child abuse, now...