Last week Spencer drew first blood in his effort to seek revenge against Andre Allen but now Andre is starting to fight back in a BIG way. An injured Vernon faces a moral dilemma that could impact his career, and Ricky looks for the ‘LOVE’ in the Big Easy. Ballers rolls on into week three of its new season. 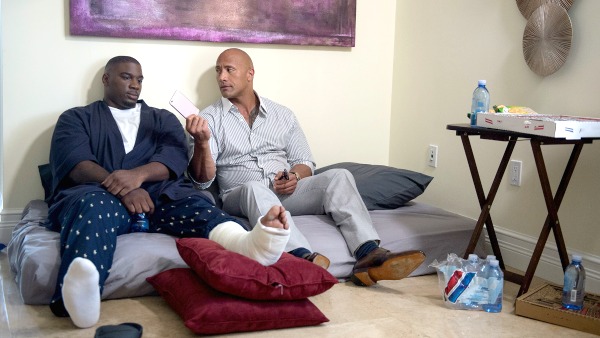 Reggie wakes Spencer up with an early A.M. call to tell him about Vernon’s injured leg. Spencer tells them to meet him at the sports med center where has a specialist look at Vernon’s leg. The doctor does not have good news. Seems that Vernon messed up his achilles tendon. Spencer tells him that the doctor is the best there is and that everything will be fine. Reggie told Spencer that the injury happened while Vernon was doing training exercises but finally Vernon fesses up about the paintball injury. When Jason arrives and says he has to let the team know about Vernon’s situation things quickly descend into a minor panic. Spencer tells Jason how Vernon got injured and Jason immediately says that this type of injury could void Vernon’s contract. Reggie says that they should lie about how Vernon got hurt and, much to his own surprise, Spencer agrees. After the procedure Spencer and Jason explain to Vernon that getting injured doing something not related to the game, like playing paintball, could cost him his job. They agree to go to the team with the story that Vernon got injured in his backyard while doing some training drills. Vernon reluctantly agrees to go along with the story. It seems that Vernon has a thing against lying but in this case honesty may not be the best policy.

While Vernon’s in surgery Joe calls Spencer to tell him that Andre is now coming back at them for stealing Sizzle Suggs from him. Joe says that Andre is calling ALL their clients, except for Ricky and Vernon, trying to get them to sign with him. Joe says that he’s trying to placate those clients who are thinking about going over to Andre by going along with whatever business ventures that they want to invest in. He seems most worried about retired football great Anthony ‘Spice’ Adams. (Sizzle and Spice, sounds like they ought to open a damn strip club with those names.) Spice wants to open a hotel in the Florida Keys and he’s in town so Spencer and Joe meet with him for dinner. Spice wants to open an affordable hotel and name it after him mother. He’s even ready to sink $4 million into the deal. While Spice heads off to the restroom, Spencer and Joe start to argue over the venture. Spencer doesn’t think that it’s a sound idea while Joe just wants to go along and placate Spice so they won’t lose him to Andre.

Despite Spencer’s misgivings they agree to go with Spice to check out the land he wants to buy for the hotel. Spencer is less than impressed with the piece of land that Spice has picked out, but he goes along with Joe, who’s overly enthusiastic about the property, just to humor Spice. Later, over drinks, Spencer lays down the truth to Spice. “This hotel thing isn’t gonna happen Spice,” Spencer tells him. He explains that the location is poor and he runs down the numerous problems that Spice would encounter in trying to get the hotel built on that land. Spice finally agrees but says he’s not giving up on his dream. Spencer agrees with him and tells him that they’ll meet again the next week and work the whole thing out.

Ricky arrives in New Orleans ready to be wowed by what he hopes will be an juicy contract offer. When he meets with the team representatives they talk a good game and pay him a great deal of compliments on his playing skills. They tell him that they want him to be a leader to the younger players on the team. They also give him a solid offer, $30 million over three years. Ricky likes the offer but he tells them he still needs to feel the ‘LOVE’. The next day at the airport, as Ricky is about to leave, the team rep shows up with a little surprise. He’s brought a marching band, a choir, the Saints cheerleaders and Saints Coach Sean Payton along to show Ricky the ‘LOVE’. Now Ricky is sold on the idea of joining the team and tells the coach that they’ll win the championship. Can you believe the ego on this guy? Thirty million wasn’t enough. They also had to put on a show and make him the center of attention. And I thought Donald Chump had a corner on the market when it came to being childish.

Charles has some serious reservations about being switched to right tackle and he voices them to his wife Julie. She sees his distress but she knows that this is something that he has to work out on his own. In the meantime, she is impressed at how well Charles has taken on the role of being a father to their new daughter. As a little token of appreciation she has his minivan tricked out with a new paint job and sound system. Charles is overwhelmed by the gesture and they decide to ‘break-in’ the newly tricked-out ride. That’s one way to take a man’s mind of his troubles for a bit.

Back home recuperating from his surgery, Vernon decides it’s best to go on radio silence until he can figure out how to deal with telling the team’s rep about his injury. When the rep shows up at Vernon’s place to see him Vernon doesn’t answer the door. Jason hears from the rep about this and calls Spencer who says he’ll handle it. Spencer arrives at Vernon’s and has to let himself in using the key that’s hidden under the front door mat. When Vernon says the team’s owner called but he ignored the call Spencer tells him that he should always take a call from the boss. “These are the guys that sign your checks,” he tells Vernon. Vernon then admits that he doesn’t want to lie about his injury. “If your gut says tell the truth, then that’s what you should do,” Spencer councils. He has Vernon call the boss back. When Vernon tells the truth about how he got injured the boss hangs up on him.

Like blind Butchie told Omar on The Wire, “Conscience do cost.”

Spencer begins to implement his plans for revenge against his nemesis Andre Allen. However it seems he has another big...