Ballers Recap: “Laying in the Weeds” 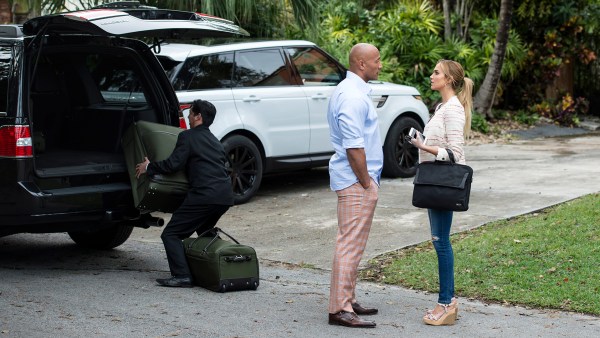 When we last saw Spencer Strasmore, his application for registration had been denied by the NFL Players Association and he sacked from his job as a financial advisor by Old Man Anderson. Basically his life is now in the toilet and fate’s hand is on the chain just waiting to give it a yank. What shall Spencer do, oh what shall he do?

Well, to start with he says goodbye to his girlfriend. Tracy’s moving to Connecticut to start her new gig with ESPN. Right before she gets in the limo to head to the airport he happens to mention his new job status to her. Apparently he had just a bit too much tequila the night before and forgot to mention that small item to her. “Wait, Anderson built that division on your shoulders,” she tells him. To which he simply replies, “Yup, ungrateful fuck.” How true. They part in a very amorous manner but it’s unclear about their relationship’s.

Now that he’s not only jobless but also possibly girlfriend-less what’s next? Why he’s gonna take over the world. But first he’s going to throw an NFL draft party for his ‘clients’ and ‘prospective clients’ in order to keep up appearances. The party will be a big help in carrying out the next chunk of his grand master plan. Spencer wants to buy ASM from Anderson even though he doesn’t have a dime to his name. He’s either a visionary or he’s way out there where the buses don’t run. He goes into fund-raising mode, first hitting his boy Ricky up for a small loan — an investment actually — and it’s a mere $12 million. Ricky, whose also currently jobless but has WAY better prospects, agrees to consider the idea. Even for him that amount is more than just a bit of pocket change. Spencer also goes to visit his banker to try and get a loan. While he doesn’t walk out of the bank with a big bank of cash he doesn’t leave with a ‘NO’ for an answer either. Seems he still has hope! On his way back for the bank he gets a text from Andre asking if Spencer’s clients know he’s been fired yet. Spencer tosses the phone out the car window. Hope, after all, is a four-letter word.

Meanwhile Joe, who’s actually still in Spencer’s corner (kinda), is taking Spencer’s place at ASM. He comes out of his office and announces the new hierarchy to the staff and gives them the saddest excuse for a motivational speech that I’ve heard since the last time the company where I used to work at changed hands. Anyway, onward and upward.

Speaking of motivation, Charles finds it hard maintain his motivation after he finds out that Ricky is seriously considering turning down the Dolphins’ offer. After all, Charles went through a lot to get him that deal. Ricky, however, has since received a much more lucrative offer from the Rams who are back in Los Angeles. Ricky lets Charles know this over lunch and Charles immediately has the waitress cancel his order. He feels he wouldn’t be able to cut his food because the knife is no longer on the table. It’s stuck in his back.

Travis Mack is also feeling a bit uncomfortable and it’s not just because of the custom-tailored suit he’s wearing. It’s draft day for the NFL and he’s there in the thick of the proceedings, talking to team reps trying to procure an offer, and a future, for himself. He has sit-downs with team reps from the Miami Dolphins and the Dallas Cowboys. Both reps have no problem voicing concerns about the young phenom’s brash attitude and his reputation for wild antics. They also can’t deny the talent that has gotten him this far. The Dallas rep later tells Jason, who’s also there – obviously,  that if Travis does’t get scooped up in the first round Dallas will definitely pick him up in the second. While that could be good news, Travis wants to be one of the top five first round draft picks. Ah the sting of young ambition.

It’s finally party time though Spencer still hasn’t made his employment status, or lack thereof, known to his clients yet. Both Charles and his wife Julie are there. And of course they run into Ricky. It’s a rather cool encounter, needless to say. However Julie manages, as always, to talk some sense into Charles.

Spencer asks Ricky about his decision concerning the Rams offer. There are worries about the temptations that could await him in the city of angels. But Spencer tells him that this is the biggest offer in the history of free agency. This statement looks like it gets the wheels turning in Ricky’s head. Changing the subject, Ricky informs Spencer that he’s willing to invest $5 million toward Spencer’s business effort. Things are finally beginning to look up.  Charles runs into to Ricky again and they mend fences. In the end Charles encourages Ricky to take the Rams’ offer.

Travis joins the party but he’s on pins and needles about his draft prospects. On television he sees that the top five spots are quickly being snatched up and he’s not one of the snatchers. Joe, who’s also in with Spencer on the new business venture if the money can be found, shotguns a few beers with Travis to help him to relax. Meanwhile Spencer accidentally walks in on Sizzle Suggs who’s getting busy with a young lady whose acquaintance he’s managed to make. Turning to leave, Spencer stops and then asks Sizzle to make a phone call for him. As Travis sits there lamenting about how he didn’t get into the top five draft picks his phone rings. The Baltimore Ravens are picking him up as the number six pick in the draft. That phone call that Spencer asked Sizzle to make worked wonders for the kid. Among the cheers of celebration at Travis’ good fortune Sizzle lets it slip that Spencer’s now out on his own. We’ll see how the shock waves reverberate next week.

Ugly things from Spencer’s past surface to bite him in the ass big time this week on Ballers. Charles finds...