There are ghosts in the house this week on Ballers. Spencer and Ricky are haunted by events and people from their past and these experiences could have serious effects on future events. Meanwhile Charle’s strong personality and opinions place him in a unique situation and Reggie and Joe bond over a ‘wildlife’ experience. 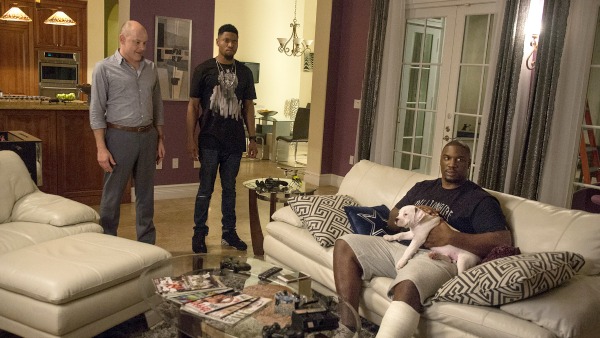 As things get underway we find Spencer in his doctor’s office and she delivers some news that he just doesn’t want to hear. It seems that the pain in his hip isn’t just a result of the tussle he had with Sizzle a few weeks back. The doctor tells him that he has osteoarthritis and that she’s pretty certain that he’ll need to have a hip replacement. “That shit’s for gummers. C’mon, I’m 40,” he tells her. She reminds him that he’s 41 but he has the hip of an 80-year-old. He then says that he thinks he can manage as long as he has his pain meds. The good doctor refuses to give him a script for the drugs and Spencer exits stage right in a bit of a huff. Later we find Spencer visiting a storefront clinic, that he heard about from Maximo Gomez, where the doctor gives him a wink and a script for the pain pills. This is obviously a problem that isn’t going away anytime soon.

Well, Vernon has the blues about being out for the season, so Reggie decides to do something to cheer him up. He visits Joe to ask for financial guidance in getting Vernon an exotic pet. Joe is somewhat impressed with the fact that Reggie has come to him to basically ask permission before doling out a large chunk of change in such an effort. It appears that Reg is finally starting to think before he acts when it comes to finances. As a sign of encouragement, Joe offers to help Reggie out with his little shopping spree and off they go to an exotic animal dealer that Ricky recommended. Reggie, at first, has his heart set on a black panther he spies. He thinks that it would be perfect and has even decided to name it Huey Newton, but the dealer informs him that the cat is already spoken for. He then settles for an alpaca which he names Rhianna. I don’t know why the writers chose this animal cause it looks, to me, like one of the butt-ugliest creations in the animal kingdom. Anyway, the alpaca has a rather stubborn disposition and therefore, obviously, various hijinks ensue in Reggie and Joe’s attempts to deliver the animal to Vernon. Alas, when Reggie walks in the house to tell Vernon about his gift he finds Vernon sitting there with a new puppy that Vernon’s assistant, Nate, has given him. So much for Rhianna.

Against Jason’s advice Spencer wants to meet with Travis Mack. Jason let Spencer know that it’s not wise for financial managers to meet with players before they get drafted by a team. He also says that it would be better if Spencer waited until the NFL Players Association approves his registration as a financial manager. Spencer leans on Joe to get the registration process expedited. He tells Joe he wants to be able to sign Travis Mack and attract more high-end clients so he can get Anderson’s foot out of his ass. Joe stomps out to get right on it.

Ricky has received the best offer yet and it’s a $33 million deal over three years from the Buffalo Bills. Jason really thinks he should take it, but Rick wants to take 24 hours to think it over. Later he, Charles and TTD attend a fashion show which Ricky hopes will lift Charles outta his funk over being cut by the Dolphins. Ricky tells Charles that he should go back and give Larry Seifert a big piece of his mind about how Charles was treated. Before Charles can reply the past walks up and stares Ricky dead in the face. His ex, Annabella, is also attending this shindig and DAYUUMM does she look good. Charles and TTD make a polite exit and Ricky and Annabella sit down for a drink. She asks how he’s been and tells him she’s been following his job situation in the media. He tells her about his offer from Buffalo and she tells him that she doesn’t think Buffalo is right for him. “If you have to leave Miami you should go some place that’s right for you,” she tells him.

Spencer finally meets with Travis at the gym and finds out that Jason was right, Travis is a little prick! The kid continually shoots off his mouth and tries to belittle Spencer but Spencer just ignores the boy’s empty boasts while bench pressing 30 reps. When he challenges Travis to match him the boy fails miserably. Spencer then begins to talk to the kid about how to have a long and successful career and the kid starts to listen.

It seems that Charles was listening to Ricky after all. Charles storms into Seifert’s office and commences to tell the Dolphins’ general manager that he’s making some huge mistakes in his choices for this season’s offensive line and why. Charles pulls no punches in his criticism and Seifert not only agrees with him, he offers Charles a job in the front office. “Lend your expertise,” he tells Charles. “Obviously you’re not short on opinions and when you let them fly it makes sense. And I could use the help.” It should be that easy for everybody to get a decent job.

Spencer soon gets a call from an old friend, Clyde Jackson, who now works for the association and is in a position to help Spencer with this process. It looks all good until Spencer comes into the office later to find out that he’ll be meeting with another rep from the player’s association. It seems Clyde didn’t want to appear to be showing favoritism. Things quickly run into complications when the rep brings up what could be a problem from Spencer’s past — the bad real estate deal that he got mixed in with Andre.

Yeah, some of those ghosts will come back to haunt your ass.

Things are still looking ominous for Spencer and Joe as their conflict with Andre starts creating casualties during this week’s...