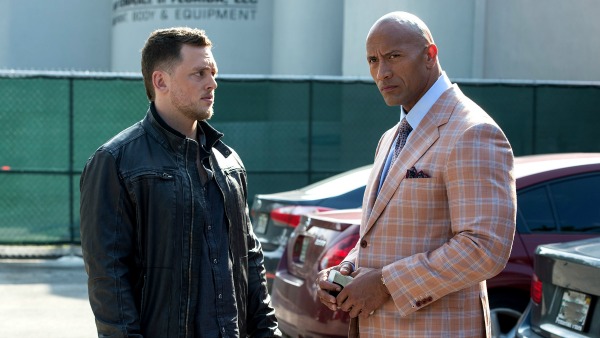 Ugly things from Spencer’s past surface to bite him in the ass big time this week on Ballers. Charles finds his groove in his new job, and things for Ricky continue to look up but not without complications. When we last dropped in on Ricky he was having a disagreement with his father, Dennis, over statements that Dennis made on Twitter. Those statements cost Ricky his offer with New Orleans and when Rick confronted his father about the issue things got real physical real fast. Ricky talks to Charles about what happened and Charles convinces him that he needs to be the bigger man and give Dennis a pass on this one. Their conversation also brings to light the fact that Ricky really wants to remain in Miami. Ricky goes to apologize to Dennis, bearing a peace offering — a new sports car. Meanwhile Charles goes to work to try to get Ricky another offer with the Dolphins. He brings the matter before Larry Seifert and Seifert tells him that in order for this plan to work not only would Ricky have to accept on offer with slightly less money, Charles will have to get another player to restructure his deal. That player is Alonzo Cooley. It’s a tough sell but Charles manages to pull it off. He lets Ricky know that the Dolphins will offer him a three-year contract for $9 million a year. It seems like Charles has finally found his niche in the Dolphins organization. Ricky is happy with the deal and gets on the phone to tell Jason to finalize things. Jason, however, has some news of his own. It seems the St. Louis Rams now have Ricky Jerret fever and they’ve made an offer, $36 million over three years with half of it guaranteed. Alas, decisions, decisions. Wish I could have those kind of financial problems.

Although Spencer hasn’t received word about his registration from the Players Association he still continues to act as a ‘mentor’ for young Travis Mack, who is looking to be a top round pick in the upcoming NFL draft. In order to raise Travis’ profile Spencer books him to tape an appearance on Jay Glazer’s program. When Glazer throws up a problematic play diagram on the show’s whiteboard and asks Travis how he would handle the situation Travis storms off the set. Spencer finds the lad and wants to know what’s wrong. Travis finally breaks down and admits that he’s dyslexic and seeing the play diagrammed on the whiteboard just frustrated the hell outta him. Spencer and Travis talk a bit more and Travis decides to go back and continue the taping. He erases Glazer’s diagram from the board and then proceeds to verbally diagram a brilliant solution to the problem Glazer presented. Once again Travis manages to impress those around him.

After meeting with Andre last week Joe is really beginning to have questions about incidents in Spencer’s past. The two are taking a steam when Joe decides to address his concerns. He also tells Spencer about Andre’s job offer. Things go ballistic from there. Joe mentions that Andre said that he shouldn’t trust Spencer and then he does allude to the fact that he thinks there are some things that Spencer hasn’t told him. That sets Spencer off, of course, and then it seems that the steam isn’t the only thing heating up the room. Joe then storms out.

When Spencer goes into the office who does he see meeting with Old Man Anderson but Andre.  It seems that Andre’s there to announce that he’s managed to steal Ndamukong Suh from Spencer and Joe and he also announces that he wants to buy ASM from the old man. Anderson says he won’t sell for less than a figure ending in eight zeroes. “You gotta keep a closer eye on your boys,” Andre tells Anderson. “The NFL PA, they certainly are.” He leaves the old man with something to ponder. Joe’s doing some pondering as well. He goes to Maximo Gomez and at first asks him to dig up some more dirt on Andre but when Maximo tells him that it’s a futile pursuit Joe turns around and requests info on Spencer. Maximo immediately gives him the lowdown on the storefront clinic where Spencer went to get his pain meds re-supplied. Joe visits the clinic and bribes the info out of the doctor. When confronted with all this info Spencer tells Joe the drug issue isn’t what Andre has over him. Spencer then comes clean about the real estate deal that went bad. It seems Spencer lost $6 million in that deal with Andre and he wasn’t the only one who lost a large amount of cash. There were other players who lost loads of cash in the deal as well. Now the chickens are coming home to roost. Old Man Anderson invites them to a business dinner where he drops the bomb. The Player’s Association denied Spencer his registration. Apparently the word’s out about his shady financial past.

There’s no joy in Mudville. Mighty Spencer has struck out. What’s gonna happen next? We’ll find out in two weeks.

Things get real for Charles this week on Ballers as he has to adjust to the duties of his new...