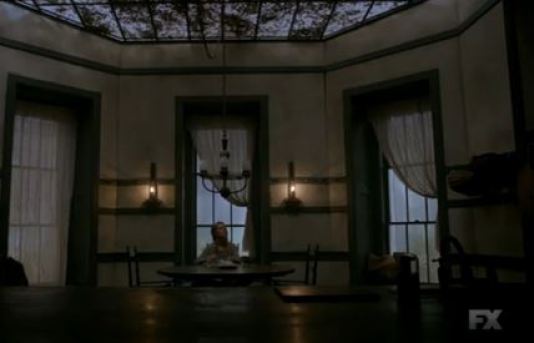 After months of cryptic teasers, Ryan Murphy’s American Horror Story secret is finally out – I  think. The premier takes us to Roanoke Island, North Carolina, where an entire colony of English settlers, and their homes, disappeared without a trace in 1590.

Lily Rabe returns to AHS on FX as Shelby Miller, a yoga teacher, happily married to Matt (Andre’ Holland), a pharmaceutical salesman. Rabe and Holland give a first-hand account of their experiences as Sarah Paulson and Cuba Gooding Jr. re-enact the story.

The L.A. couple, madly in love and recently pregnant, are out celebrating Matt’s promotion and the little bun in the oven. They are perfectly happy in LA. Strolling home one evening,  Shelby is pushed to the ground as Matt falls victim to the Knockout game.  Shelby loses the baby and the two decide to leave the city life of LA and move to North Carolina. They’re charmed by an empty house they find on Roanoke Island and win the auction, angering the local hillbillies.

Lot Polk (Chaz Bono!) his brother Cain, (Orson Chaplin) and Papa Polk (Grady Lee Richmond) are definitely “Deliverance” material, and they fume after being outbid by them city-folk. The auction began at $10k; that right there would raise my hackles.

Once Shelby and Matt move in and begin renovations, the fun really begins. The couple are canoodling but are interrupted by a loud thud. Matt goes downstairs to investigate. There are trash cans and debris strewn across the yard. As an added bonus, there’s a mutilated pig, dead on his doorstep. Matt has been overly protective of Shelby since she lost the baby, so he buries the pig, but doesn’t tell her about it. I would have rented a U-Haul that very night!

Matt thinks it was the the local yokels — bigots who don’t believe in interracial relationships. I don’t think they believe in toothbrushes or soap, either. The next morning Shelby hears the sound of hailstones, tap-dancing on the roof and windows. She steps out onto the patio to watch the hail fall. Her palm out to catch a few hailstones, Shelby’s horrified when she realizes it’s raining human teeth. (Get out!) When Matt gets home, Shelby tells him what happened, but when they look on the patio, there’s nothing there. Matt chalks it up to stress from the miscarriage. He has to leave town on business, and Shelby insists she’ll be fine alone. She looks forward to some time alone, a break from overprotective Matt. Later that evening, she pours herself a glass of wine and heads out to the hot tub. A relaxing soak turns to terror when something forces Shelby underwater. As she struggles, she sees a shadowy figure and torches circling  the hot tub. (Get OUT!) As soon as she’s free she calls the police and Matt, who races home.The police see no sign of any torches or footprints around the tub and seem a bit skeptical of Shelby’s story. Matt asks his sister, Lee (Angela Bassett) to stay with Shelby while he’s out of town. Shelby and Lee don’t like each other, but try to get along for Matt’s sake.

Lee (whose story is narrated by Adina Porter) was a police officer, with a degree in Criminal Psychology. After being wounded on the job, Lee became addicted to pain pills. Her addiction ended her marriage and limited custody of her daughter. She works hard at maintaining her sobriety and asks Shelby not to drink while she stays with her. Before leaving town, Matt installs a security system that he can monitor what’s going on using his cell.

That night, Lee’s awakened by the sound of an empty wine bottle rolling into her room.  She accuses Shelby, who swears it wasn’t her doing. Noises in the house draw the women down to the cellar. There’s a television on, a disturbing videotape playing, showing someone in terror. The power goes out, and Lee and Shelby are spooked enough to stay in the basement. On his phone, Matt sees the house, and people walking through the yard carrying torches. He races home. So, how ‘bout that U-Haul?

When the women go back upstairs, they find vines of twine woven up the spiral staircase. There are straw figures and rudimentary crosses woven in. Once Matt arrives, Shelby shows him what she and Lee found. Matt chalks it up to the locals trying to scare them out of the house.

Shelby is furious that Matt isn’t taking things seriously and drives off into the night.  Another great idea! Matt calls Shelby’s cell repeatedly, but she drives on. Reaching for her phone, her momentary distraction causes her to hit a woman in the road. Shelby jumps out to see if she’s injured, but the woman takes off into the woods. Shelby grabs her flashlight and runs after her. Shelby runs until she’s lost her way. In the trees above, she sees the same twine vines with the straw figures and continues running. She falls on the ground and it begins heaving under her. A scalped and bloody man falls in front of her. Something is chasing him. Shelby screams and screams.  We end Chapter 1. I’m looking forward to Chapter 2. I love the idea of using historical facts to crank up the terror.

To this day, no one knows what happened to those colonists in 1590.

It's the finale for American Horror Story: Hotel  and Special Contributor Tracey M. reports that Iris and Liz have the...