This week, American Horror Story: Hotel amped up the creep factor. Special Contributor Tracey M. writes about the bloody twists in this week’s episode. Get your chills on in her new recap. – David F. 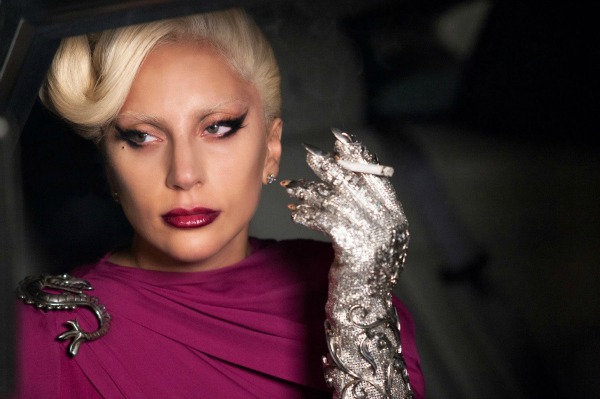 Screams echo through the Hotel Cortez. The remaining Swedish visitor is still in her cage, being drained of her blood by three of the little vamps. They stop once the blood tastes bad; a sure sign the poor girl is dead. Iris and Liz Taylor wheel the sheet-covered gurney to the laundry room. Miss Evers (Mare Winningham), the laundress, frets over the bloodstains but is confident in her stain-removal skills. (And she has good reason-you’ll see!) Liz wheels the gurney over to the laundry chute, and deposits the body. The chute looks deep and endless. The body bounces off the walls of the chute and lands on a mattress, to lie among countless other bodies. Hmm… this sounds scarily familiar. Iris tosses in a scoop of lime and closes the chute. Business as usual!

Iris, always the busy bee, is in the playroom extracting blood from all four of the children. She’s filling a decanter for the Countess. Iris delivers the tray to the room, hoping to see her son, Donovan, but the Countess closes the door in her face. The Countess wants a night out, but Donovan wants to stay in.

Detective John Lowe is restless in his bed at the Cortez. When he closes his eyes, he sees horrific visions, which finally drive him from his bed out into the hallway. He thinks he sees Holden at the end of the hall and calls out for him. He runs after the boy, who soon disappears.

John finds himself at the hotel bar. Sally’s sucking on a cigarette, and Liz Taylor is tending bar. Sally senses that John has a problem with alcohol and asks “Cleopatra” to pour him a ginger ale. She notices that he’s looking at all her track marks and tells him they’re kindred spirits. Sally says that getting high is like climbing a ladder but never being able to “reach the top, reach the light.” His recollection of his last drunk jag brings back memories of the crime scene that pushed him over the edge. A distraught man whose family had just died of carbon monoxide poisoning blew his brains out. The case sent John on a two-day bender and he tried redeeming himself by taking his family to the fair. No redemption here, pal: Holden disappeared from the merry-go-round at that fair. Sally drinks from a bottle of bourbon and listens to his sad tale with tears running down her cheeks. John knows the danger of sitting at a bar too long and leaves.

At the police station the next day, the investigation into a group of serial murders continues. A very jumpy John receives a package from the Cortez. In a panic, he alerts the bomb squad, only to find the box contains an Oscar covered in blood (honestly, aren’t they all?). John wants the blood analyzed. Despite this “gift” and the disturbing visions, he returns to the hotel. Scarlett is coming for a visit with her dad. He waits in the lobby for her. She runs into his arms.

The joint is jumping and the lobby seems to be the center of the festivities. Will Drake introduces himself to John as the new owner of the Cortez. Will is throwing a Vogue fashion show. Against the backdrop of clinking glasses and laughter, Will asks his friend Claudia Bankson (Naomi Campbell) to spend at least one night; she happily agrees and tells him she’ll stay a week. (We’ll just see about that.)  Liz Taylor is in the lobby trying to teach Vogue staffers how to “Vogue”. Honestly, it’s been a long while since Madonna, shouldn’t they know how to do this by now? Liz is decked out in a gold-trimmed tunic, complete with gold turban and earrings for the festivities. Say this for Liz, she is no plain Jane. Scarlett is introduced to Lachlan, Will’s son. The two sit together during the fashion show. Lachlan, bored with his dad’s fashion shows, offers to show Scarlett “something cool” after the show. Donovan and the Countess are seated right next to the runway, watching all the yummy models.

The Countess is drawn to Tristan (Finn Wittrock), a pill-snorting train wreck of a model. When he’s finished staggering down the runway, he informs Will that he’s done with modeling, and cuts his cheek with broken glass to show he’s serious. Donovan is angry and jealous; the Countess loves him. He attacks Tristan in the hallway until the Countess intervenes. Tristan is high as a kite and runs off to roam the halls. He hopes there are drugs in some of the rooms.

Later, Lachlan takes Scarlett downstairs, to see the children that never wake. They slumber in glass coffins. Scarlett approaches a boy who looks like Holden, and his blue eyes open. The next day, Scarlett sneaks back to the hotel by bus, but the open coffins are empty this time. She enters a doorway and sees Holden, all alone in the playroom. She asks Holden why he hasn’t grown at all. She wants to take a picture to show her mom and dad, but Holden goes for her neck as soon as she leans in for a selfie. Scared, she runs out of the room. In the hall, Sally pops out to reveal a bloody mouth of crumbling teeth to Scarlett. Scarlett screams and Sally laughs maniacally. Scarlett hightails it home, where her frantic parents are relieved to see her. John is horrified that she went to the hotel alone, and a bit spooked that she claims to have seen Holden. Her selfie shows her sitting next to a blur.

Tristan has been seduced and turned by the Countess. After vigorous vampire sex, she tells him about what he has become, and the pleasures that await them. Her one rule is that he is to love only her. She tells Tristan she was born in 1904, and shares tales of her adventures. She reminisces about the ’70s, where she could be free and not attract attention. Donovan crashes the afterglow in a fit of jealousy. The Countess asks Tristan to give them privacy, and gets Donovan to pack his things.

Returning to the hotel, John marches in with a few questions for Iris. She insists he buy her a drink first. Liz pours a drink for Iris, who tells the story of the peculiar man who built the hotel, James March (Evan Peters). Mr. March was a sadistic, depraved man, who designed the hotel to be a torture chamber. Sound-proof rooms, secret chutes, hallways with no exits. Clearly the writers of AHS: Hotel are digging the architecture of Devil in the White City. March would rape and torture victims for his pleasure. Miss Evers, the laundress, could remove any stain, and she could keep a secret. Then Mr. March got sloppy, and the police showed up at his hotel. He killed himself and Miss Evers just before the police burst into room 64, his office.

John begins an investigation of the local serial murders and discovers that all of the victims broke one of the ten commandments. Meanwhile, Tristan lures a man upstairs and kills him while the Countess watches. This turns her on, and she touches herself before licking the blood from Tristan’s lips.

It's pretty clear that checking into the establishment at the center of American Horror Story: Hotel will be difficult for...