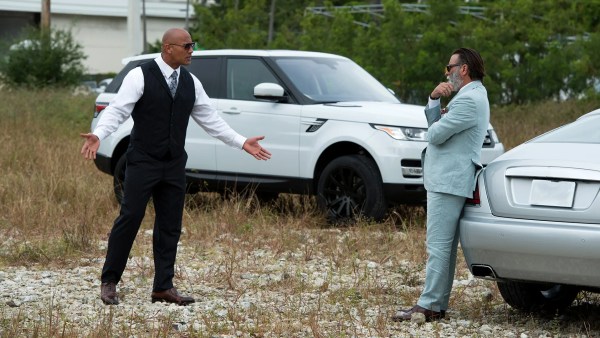 Finally, more details about Spencer’s past bad deal with Andre are revealed. Ricky gets closer to making a decision about his future, with some parental guidance. Vernon and Reggie offer to make a ‘charitable’ gesture. And Charles’ new job creates a possible threat to his happy home.

Spencer wakes up to find his house in a bit of a shambles after the big draft party he threw. He doesn’t have time to throw out the trash, much less the straggling house guests, because he’s got to get up and out in a hurry. He’s on his way to collect some cash that is part of the investment Ricky promised him. Spencer plans to meet with Anderson later to make an offer to buy ASM. Apparently Ricky keeps a small amount of walking-around money in his home safe. We see him counting out one million bucks, in greenbacks, and throwing it in a black bag that he hands to Spencer as Joe looks on. Joe also notices that Ricky’s got more than a few gold bars in the safe as well. “We’re only one computer virus from the financial apocalypse yo. Need that back-up currency when shit goes down,” Rick tells him. Spencer tells Rick that they can take the other $4 million in the form of a check. He just needs the cash to make an impression.

After Spencer and Joe exit Ricky and his father, Dennis, continue their ongoing conversation about Ricky’s future. Before leaving Joe mentioned the $36 million dollar offer that the Rams still have on the table. Ricky is still hesitant about it. Now Dennis offers his son some fatherly advice. He tells Ricky that he should play for a team that has the best quarterback in the league. That’s the best way, according to Dennis, that Ricky can continue to read his potential as the league’s best receiver. Dennis wants his son to set his sights on the Hall of Fame. After a bit more discussion both agree that Rick needs to be with New England. Ricky says he needs to call Jason.

Joe and Old Man Anderson meet with Andre Allen about Andre’s offer to buy ASM. The meeting is short and anything but sweet. Andre offers $9.5 million for the business. This is well below the price that Anderson had in mind. Andre tells the old man that the business isn’t worth what it was before Anderson fired Spencer. He cites the care and attention that Spencer gave clients as the reason that ASM had done well up to this point. Anderson, of course, refuses the offer, telling Andre to come back only if he can spare $15 million.

We find super agent Jason Antolotti reassuring a very concerned Vernon that his place on the Cowboys lineup isn’t in jeopardy, despite the draft pick the team made to replace him, while he continues to recuperate from his injury. During this conversation the subject turned to Spencer’s current situation. When Vernon and Reggie voice their concern for Spencer Jason tells them that the $300 grand that Spencer loaned them last year was all the money that Spencer had at the time. This news catches them by surprise. Vernon decides to invite Spencer over to express his gratitude for this.

En route to his own meeting with Anderson, Spencer makes a quick stop by Vernon’s. Vernon and Reggie reveal what Jason told them bout the loan Spencer made them. In an effort to show their gratitude Reggie hands Spencer a check for a cool million. They want to invest in Spencer’s solo venture also. Spencer politely declines saying that he can’t take the money but he certainly appreciates the offer. He then goes on to his meeting with Anderson. There, with Joe looking on, Spencer announces to the old man that he wants to buy ASM, dropping the black bag on the table in front of Anderson. The old man takes a look at the cash and tells Spencer that he will sell — if Spencer can come up with the rest of the $12 million asking price.

It seems that things in the Greane household are getting a bit tense. Job responsibilities are keeping Charles away from home much more than Julie likes. She’s having trouble juggling her job schedule while trying to care for their infant daughter Kiki. When Charles mentions this to Larry Seifert the GM tells Charles that the job’s schedule is unrelenting. “That’s why I’m twice divorced,” he tells Charles. Seifert then tells Charles to go on home so he can spend some of quality time with his family. When he gets home Charles finds that Julie has hired a male nanny, named Manny (of all things), to take care of Kiki so that she can continue to work at the hospital. Needless to say Charles is not delighted with this new turn of events but, for the time being, there’s nothing that he can do about it.

Back in his car, Spencer gets a call from his doctor. She’s calling to inquire about the condition of his hip and to see about scheduling him for hip replacement surgery. Spencer, who’s munching on pain pills during most of the short conversation, tells her that he’s dealing with the hip problem just fine. He also mentions his current employment situation and says that he’ll consider the surgery sometime around his 65th birthday. He thanks her for her concern but he has to take another call. It’s Andre and he wants to meet.

Andre’s meeting spot is a vacant lot. Apparently it’s the property involved in the $6 million deal that went bad and here’s where we learn what went down. According to Andre, he recommended that Spencer only invest $600 grand in the deal. Andre wasn’t completely sure that it would make money. Spencer decided to go all in with $6 million and he got other people to join him. The deal went south and everybody lost big. This seems to be the source of not only Spencer’s financial issues but also the denial of his registration by the Players Association. Andre tells Spencer that he will give him the money to but ASM and allow him to keep the entire staff on the payroll. Andre also says he’ll clear up Spencer’s registration problems with the P.A. Spencer turns down the offer without hesitation saying that he’ll get the money to buy ASM on his own. That was a very ballsy move, possibly foolish but ballsy. However Andre’s last words to Spencer are that he shouldn’t get the money from his clients. “That’s how you got into this mess in the first place,” Andre says.

Now Vernon and Reg get another visit from Spencer. He wants to take Vernon up on his investment offer but the amount is going to have to be just a bit more that a million. He needs Vern to let him have $5 million! Fade to Black.

The season finale is next week.

Ballers Recap: “Laying in the Weeds”

Basically his life is now in the toilet and fate’s hand is on the chain just waiting to give it...