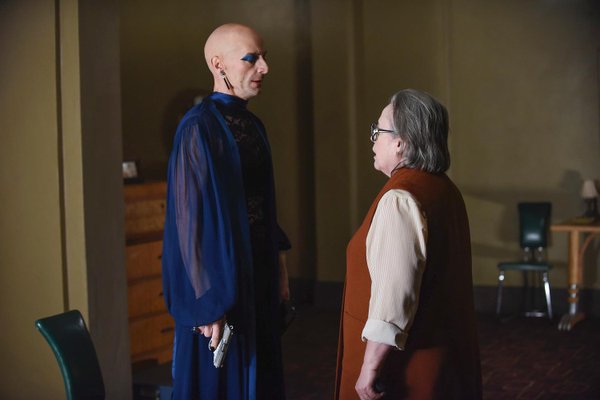 American Horror Story: Hotel is back and the twists get deeper according to Special Contributor Tracey M.  Liz and Iris help Ramona with an impromptu makeover; Sally puts things together; and Scarlett and her family are adjusting to their reunion. Read on for more.  – David F.

Rewind to Liz and Iris preparing for battle. They barge into Countess Elizabeth’s suite, guns blazing, intent on ending her reign over The Cortez. Donovan, still in love with Elizabeth, jumps in front of her, trying in vain to shield her from the bullets. Iris orders Liz to stop, Donovan’s been hit. He begs his mother to make sure he’s out of the Cortez before he dies. Iris and Liz manage to get him off the property, where he thanks his mom with his last breath. Liz reminds Iris they have no time to spare. Somehow, the Countess got away. Liz is eager to find and finish her before she can regain her strength.

Sally has taken the Countess down in the basement where the many chutes deposit the unfortunate. With flies buzzing in the background, Sally begins removing bullets with her fingers as Elizabeth screams in agony. Sally tries to comfort her. Always handy with a needle, she stitches Elizabeth’s wounds.

Seems Sally’s Crazy goes way back, before she ever entered The Cortez. While sewing up the Countess, she reminisces about the past. Back in 1993, she wrote music for a popular grunge duo. The three did everything together, so one night they checked into The Cortez to party. It was an epic orgy of sex and heroin. Sally suggested they stay close to each other–always. While her partners were nodding out, Sally stitched their bodies to hers. Now that’s close! She woke to find both foaming at the mouth, overdosing. She says that was when the Addiction Demon first visited, tormenting her for five days in that Hell, until she could no longer bear it. She ripped herself away from the corpses, screaming as the deep stitches popped.

The Countess is not healing as quickly as Sally hoped. She makes Elizabeth swear to never leave her, lamenting that everybody leaves her. Elizabeth asks for Donovan. Surely, his blood would accelerate her healing. Sally breaks the sad news of his death, and recommends using Elizabeth’s “children”. As the transfusion begins, the heartbroken Countess tearfully clutches the two children to her. Sally tells the Countess she needs her help to get John back into the hotel. March’s masterpiece needs just one more display, a murderer. Um, we still haven’t addressed that mattress-stuffing, Sally!

Liz knocks at Iris’ door to find Iris has been crying. Using the hotel’s large furnace, Liz has cremated Donovan, and presents a large coffee can to Iris. She thanks Liz and asks to be alone with him. She pours the ashes on the bed and pours her heart out to her son. Miss Evers is summoned for clean-up. Iris is covered in ashes, she asks Miss Evers to vacuum up the rest. She goes up to the hotel roof, and the wind blows Donovan’s ashes away as she stares out at the world.

At Hotel Cortez, Liz decides to enlist Ramona’s help. Iris fears they both will be eaten alive as soon as the door is opened, but they continue on into the hidden hallway. They stare in confused disbelief at all of the small bodies John and Alex left there. They see poor Will Drake there, too. Ramona steps out of the shadows, extra hangry. As Liz and Iris back away from her (this hunger is not going to be fixed by a Snickers bar) they promise to bring some fresh blood.

Like a gift from below, a young woman checks into the Cortez that evening. She excitedly explains that she’s going to be on a popular game show the next day. Liz recognizes her as one of the witches she saw in a recent a news story. Welcome back Queenie from Season 3, (Gabourey Sidibe) glad to know the coven is still thriving! She suspects something isn’t right, but heads to her room anyway. Ramona slips into Queenie’s room, licking her chops. The women battle, Queenie using her Human-Voodoo-Doll powers to inflict wounds on Ramona by injuring herself. Queenie and Ramona are beating themselves senseless. It seems Ramona’s down for the count until James March steps in and turns Queenie into an easy meal. Ramona greedily tears into Queenie, as her strength surges back.

Back at home, Alex and John embrace Scarlett, doing their best to explain the new circumstances. Scarlett is worried how they will explain that Holden will never change. John and Alex try to reassure her and John heads out to get some “medicine” for Alex and Holden.

John returns with some takeout. He pulls into his driveway and checks on the young man bound in the trunk of his car. Then he walks into to his house, calling for his family and sees a key tag from The Cortez hanging from a light fixture. He rushes to the hotel, fearing for his family’s safety. The key leads to Sally’s room, where she’s waiting on the bed. She reminds him that he hasn’t finished what he promised James March. She says his family will be safe once he keeps his promise. John needs a murderer and he knows exactly where to find one.

Liz’s eyes sparkle a deeper green. She envies the way Ramona fills out one of her dresses: the blood of a witch is a magical elixir. Ramona’s hair is flowing, almost alive and she’s glowing. Urged by Liz and Iris, she enters the Countess’ suite, but knows she can’t count on the element of surprise as the Countess recognizes the smell of her blood from their time as lovers. The women banter. Elizabeth tries to apologize to Ramona for the years of suffering she caused. She offers Ramona the Hotel Cortez. She wants to take Bartholomew and leave. She asks Ramona to make love with her once more before escaping.

Bags packed, The Countess takes the elevator to the lobby and steps out directly in front of John’s gun. He fires until she falls to the floor. Countess Elizabeth’s head is the final display in March’s macabre museum. March compliments John’s creativity, while Sally sneaks up and stabs at John. She’d love for him to be with her in the hotel forever. March stops her, saying he has great plans for John. He threatens Sally with the addiction demon to keep her in line. John pushes away from March and Sally, demanding to see his family.

Miss Evers is disgusted to find James preparing for dinner with Elizabeth. She admits to James that she has always loved him, but he never noticed her or appreciated her loyalty. Elizabeth arrives and Miss Evers scoffs at her. James declares that it’s finally time to forgive Elizabeth for turning him in to the police. Elizabeth is confused. Miss Evers speaks up and admits that she called the police. All she wanted was to be with James for eternity. She loves him and begs him to see what she means to him. James banishes her from the hotel forever. After a moment, Miss Evers feels a great sense of freedom, telling James she’s glad she’ll not have to wait on him and his whore any longer. Elizabeth sits across from him, clearly miserable, now forever a part of Hotel Cortez. James toasts to their eternity together. Elizabeth chokes down her wine. Oh, how the mighty have fallen.

This week on AHS: Hotel, Alex and John find common ground; Donovan handles his jealousy poorly, and Liz and Iris...