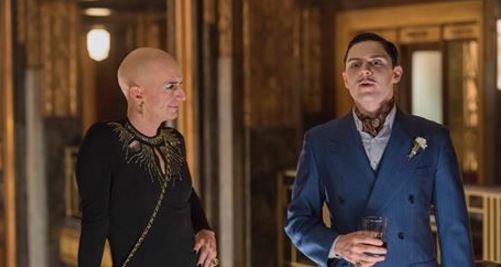 It’s the finale for American Horror Story: Hotel  and Special Contributor Tracey M. reports that Iris and Liz have the power, Sally shakes the blues, and John and his family make some final adjustments. Read on for her recap! – David F.

It’s a new day at the Hotel Cortez. Iris and Liz are running the show. By selling Countess Elizabeth’s art collection, they funded needed renovations and  hope the improvements attract the paying guests they need.

A skeptical looking couple check in, nosing about the dated lobby. Iris recognizes them as Jo and Mitch from Trip Adventurers, an online travel site. The hotel managers grin at the man and woman till it hurts, in hopes of a favorable review. Iris offers champagne and Liz graciously shows them to one of the refurbished rooms. It’s bright and modern, done in shades of white. Liz leaves them to explore their room. They’re pleasantly surprised by the modern decor and amenities. The next surprise isn’t so pleasant, though. It’s Sally, sitting on their bed, telling them horrific details about the hotel’s history. They ask her to leave, but she just sits there, toying with a hypodermic needle.The couple are outraged, and Mitch moves to put Sally out. She stabs the hypodermic full of air into his heart, ‘Night, Mitch. Jo runs down the hall screaming for help. She runs into Will Drake who gives her his most charming smile before plunging a dagger into her neck. Welcome to Hotel Cortez!

Iris is frustrated that Sally and Will keep killing their guests. Liz calls all souls together for a long-overdue meeting. Everyone besides Countess Elizabeth is in attendance. Surprisingly, James March is also frustrated by the never-ending carnage. He suggests Sally and Will find another way to entertain themselves. Will just smirks. It’s not his fault that he’s dead and bored. Sally laughs – she makes it clear she’ll do what she damn well pleases. March reminds her she can be kept in line by the Addiction Demon, if necessary. Not so funny now, is it, Sally? A bad reputation would be a sure death sentence for the Cortez. March demands that everyone stay on their best behavior until the hotel is 100 years old in 2026, when the Cortez becomes a protected historical landmark. In the meantime, it could be sold or even demolished, and then what would become of all of them?

Liz and Iris get creative in keeping the problem children busy. Iris gives Sally a smart phone and sets her up with every existing type of social media. Sally is intrigued, then dives right in to share her thoughts and feelings with people everywhere. And they respond! She starts writing music again, and Liz performs her songs online. With so much attention and support, Sally will never feel alone again. It’s nice to see Sally smile. Even better to see her throw her “works” out the window.

Liz approaches Will about continuing his clothing line. She knows he still has the passion despite all his pouting. Liz becomes his legal representative, and the new face of Will Drake Fashion. When his investors want to meet with him, they do so at the Cortez. Will starts putting on fashion shows again with his fellow spirits as the models. Despite the positive changes at the Cortez, Iris senses a lingering sadness in Liz and surprises her with a visit from renowned psychic, Billie Dean Howard (Sarah Paulson). Iris is hoping Billie (who worked for Jessica Lange‘s Constance Langdon in Season 1) can reach Tristan.

The psychic walks around Liz’s room, sensing a spirit is near. Thinking it must be Tristan, Iris is surprised when Donovan comes through instead. Liz is very happy for her dear friend, but can’t understand why Tristan won’t communicate with her. Billie’s spidey-sense is tingling and she sees an opportunity to cash in on the hotel’s history. She spends lots of time filming at the hotel, trying to reach the Ten Commandments killer, and creating quite the buzz.

Some years before, John was struggling to keep his crimes and his family private. He would bring home bodies when he could, and Alex would steal blood from the hospital to supplement their diet. Alex and Holden ate a lot of dog. A wise Scarlett convinced the family to move back into the hotel, where they were safe. Scarlett was enrolled in the same boarding school as Lachlan, and had regular visitations at the hotel.

One night when John was out on a hunt for blood, he was suddenly surrounded by police cruisers. The subsequent shootout left him dead, just a few feet shy of the hotel’s entrance. Bummer. Now he can only see his family on October 30th, Devil’s night.

Billie has gotten wind of Devil’s night, and has been invited to attend. The one condition-no camera crew. John greets Billie in the hotel lobby. She can’t believe they are finally face to face. John leads her to the festivities. She recognizes everyone there. She sees the notorious March, as well as Gacy and Dahmer. Wuornos and Ramirez arrive shortly after and the faceless Zodiac broods in the corner. Billie is handed a glass of absinthe, the traditional drink for this night of nights. She ends up restrained in a chair. The group laughs and they circle her, weapons flashing. John warns her to never enter the Cortez, or mention it on television again, or they will end her. Billie laughs. They’re just ghosts, how could they hurt her? Ramona slithers in, and lets Billie know that she will be the one coming for her if necessary. A wobbly Billie makes her exit, stage right.

Liz calls for another meeting in her room. She has inoperable prostate cancer that has spread to her spine, and doesn’t have much time left. She doesn’t want to die a pitiful mess in a hospital or as a burden to her son and his family. Ramona had offered her the gift a few times, but Liz would never accept. She wouldn’t be able to kill to live. She wants her friends by her side to help her transition. She wants them to be together forever. She has spread various weapons on her bed for them to choose from. Liz lies down, surrounded by Sally, Marcy, Will, Iris, Jo, Mitch, the Swedish sisters and even Miss Evers, despite all his puffery, March can’t banish anybody from the hotel. Sally has a syringe in hand when Countess Elizabeth enters. No one has seen her since her death, aside from March. She offers to help Liz transition one more time. After all, The Countess accepted Liz and helped her accept herself; Elizabeth thinks it’s only right that she be the one. Liz’s beautiful green eyes are shining with tears of gratitude. There are tears all around. The Countess gently cradles Liz’s head, and with a quick motion, uses her sharpened index blade to make a clean cut across Liz’s throat. Later, Liz stands looking at her ruined body on the bed. She lights a cigarette and hears a familiar voice admonishing against the deadly habit. Liz turns around; it’s her beloved Tristan. Yay!

Now that The Countess has come out of hiding, she spends lots of time at the hotel bar, dressed to the nines and whetting her appetite for pretty boys.

This is where we end our stay at the Cortez. All is as it should be.