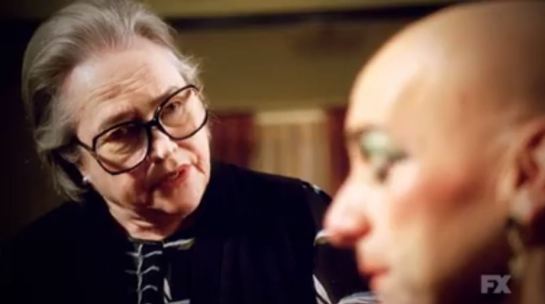 This week on AHS: Hotel, Alex and John find common ground; Donovan handles his jealousy poorly, and Liz and Iris dream up a scheme. Special Contributor Tracey M. gives you the lowdown in this recap. – David F.

Another tidbit in the history of Hotel Cortez. Over the years, Liz Taylor has seen the occasional doomed couple check in for one last night together, to say goodbye the way they choose. One partner might be ill, and neither wants to live without the other, so they commit double suicide, joined together forever.

She shows an elderly couple to their room this night, lingering a moment before heading back to the front desk. She knows the wife has cancer, and it’s spread. Her husband won’t survive without her and this is how they want to celebrate their last wedding anniversary.

After a while, Liz and Iris take a trip up to the couples’ room. Liz says that seeing them lying there side by side is so beautiful. Iris just sees a big mess to clean up – they used revolvers! Liz starts to cry. She feels cheated; life is nothing without Tristan and she will never find love again. Liz grabs one of the couple’s revolvers but Iris quickly grabs it, reminding her that if she dies in The Cortez, she will be stuck there forever. Iris says she, too, has been let down. Donovan, her son, her one true love, doesn’t love her. She suggests they take care of their final affairs, and end it all together.

John is in March’s macabre museum with Sally. She’s draped over his shoulder like a shawl. Newly added to the collection are some ears. Sally gushes to John how brilliant he is, how skillful; the ears are the perfect result of listening to false gods. She says they’re almost home.

Later, Liz makes a deal with Miss Evers. She wants to see her son one last time to try to explain her 31 year absence. Miss Evers calls the young man and arranges a week at the hotel as his father’s guest. Keeping her end of the bargain, Liz hands Miss Evers a large bottle of oxygen-powered detergent. It promises radiant whites, and Miss Evers is tickled pink. She says it’s like Christmas morning! Ah,the joys of stain removal.

Donovan is in a rage and decides to confront Rudy in his motel room. He barges in claiming that he’s the best man for the Countess. They argue back and forth until Rudy is pushed to his limit and draws his sword (yes, sword). Donovan laughs at his attempt. He hates Rudy’s face, because it’s his face and just like the face of his replacement, Tristan. In fact, all of Elizabeth’s men were Rudy substitutes. Donovan pulls a gun, laughs, and fires directly into Rudy’s head. He fires until Rudy’s face is no longer recognizable. He doesn’t want the Countess mourning over that face.

March is holding the contractor captive. He can’t send this man home with knowledge of that hallway.The man is restrained and gleefully set on fire by March. As the killer flames die down, John bursts in demanding to know Alex’s whereabouts. March says that spouses just get in the way of important work, nonetheless March arranges an early meeting over tea for the estranged couple.

Listening to John and Alex, we finally learn Scarlet is safe at her grandmother’s house. Both parents feel guilty for not spending any time with her. Alex says that she and Holden have both changed, they are different than he remembers. Alex is scared, and tells the story of how she saved Max and resulting plague of junior vamps he created. The Countess has given Alex one chance to fix her mistake, or she and Holden will die.

Meanwhile, in her suite, The Countess faces off against Natasha. The girlfight morphs into angry accusations. Natasha scoffs at Elizabeth. She says Rudy only used her and doesn’t really love her. The Countess makes short work of Natasha by blowing her brains out. Some girls’ night out, eh?

That evening, a nervous Liz strikes up a conversation at the bar with a new hotel guest – her son, Douglas. He admires Liz’s dress and they chat for hours. Douglas says his wife wants to move to Boulder, Colorado, and start a business, something Liz encourages. He adds that he is at the Cortez to meet with his father, whom he hasn’t seen in years. Douglas leaves the bar and Liz tells him to stop by anytime. She couldn’t muster the courage to tell her son the truth. She watches him walk away with tears in her eyes.

John and Alex return to the house where the rogue children roost. The children scramble from the shadows, showing John and Alex that they are clearly out numbered. Young Kimmie collapses, seizing and foaming at the mouth. Max panics as Alex tries in vain to save her. Alex promises that she has a way to help the rest of them, if they’ll go to the Cortez. Once there, Alex tells them to go into the one room in the sealed hallway until she can get them something to eat. John pushes the last boy in and slams the door. The children realize they’ve been tricked, and search the hallway for any possible escape. They discover what’s left of Will Drake’s body, and meet a bloody-faced Ramona. She smiles. “Mama smells appetizers!” Well, she did say she wouldn’t starve.

The Countess has summoned the police to investigate Will Drake’s “disappearance”. As we know, no one really dies in Hotel Cortez, but the Countess is still a bit shocked when Will walks in, apologizing for worrying his new bride. He says he got lost in the new wing of the hotel. He kisses her cheek as the police take their leave, then Will and the Countess head to her suite to hash things out. She tells him he got what he deserved for disrespecting her son. He asks her where his body is. He reminds her she’s not in his will, if that’s her motivation. She laughs at Will; Lachlan is the sole heir, and she is now his legal guardian. She muses that she could always make Lachlan a “blood” relative and suggests that he go check on his son and shuts the door to her suite in his face.

Later John and Alex reconnect and make love. Alex likes the changes she sees in John, but can’t yet say she’s into staying married. She slips out of bed to check on the children. Once Alex is out of sight, Sally pops up to claim her man. She is one pissed kitty and gets in John’s face demanding to know if she’s just some whore to him. She kisses him roughly and leads him back to the bed, but he fights her off. Sally hisses that Alex will never accept the fact that he’s the Ten Commandments Killer and reminds him that Alex didn’t want him. Sally runs at John with a knife, but he wrestles her to the floor and steps away. She screams after him that he’ll be back, and shudders. She senses the Addiction Demon is close by. John had better finish March’s masterpiece.

Liz is at the bar with Douglas again, struggling with telling him that she is his father. She begins to tell him, but Douglas interrupts. He puts his hand over Liz’s and says “I know, Dad. You don’t have to explain.” He tells her there’s always room for another woman in his life. Liz cries tears of gratitude as her son accepts and welcomes her with open arms.

I got a bit choked up myself!

Donovan and the Countess are seated for a meal. She tells him how she watched the monitors and saw Will being eaten alive by Ramona. She’d like Donovan see to it that Ramona’s back in the iron maiden and she’d like Will’s body moved before it becomes a problem. He says since he’s cleaning up her mess, she can clean up his mess. The Countess is confused, fear creeping into her eyes. He sarcastically suggests she text or, even better, Facetime her boyfriend, Rudy.  Elizabeth hurries to Rudy’s motel. She collapses in grief when she sees what Donovan has done to him.

Liz is walking on air in a lovely, flowing royal blue peignoir and heads to Iris’ room. Iris has made a memorial video for after her death, and set it to music. She’s also put together an arsenal of suicide choices on her bed. The glowing Liz now wants to live and be a part of her son’s life. Iris is bummed, she was all set to go. Liz implores Iris to stay with her so they can make their mark. Iris begins loading her gun as Liz keeps cheering her on to greater things.

Alex brings John to see Holden. John can’t believe what he sees. He holds Holden in his arms, crying tears of joy. John and Alex decide to take Holden home, where it’s safer for all of them. From the catwalk above, Sally screams after John, but he keeps walking with his family until they are out of the Cortez. Sally keeps screaming.

The Countess finds Donovan in his room, bopping to Drake’s Hotline Bling. Doesn’t everyone do that after blowing off someone’s face? She tells him that she’s been looking for Rudy for close to 100 years and she didn’t know that he’d been in the Cortez all that time. She admits to Donovan that she’s been trying to duplicate Rudy all along and knew Donovan’s ego couldn’t handle her loving someone else. Now that the Countess wants him dead, Donovan falls to his knees, saying his death is the only way he can love her. Huh? Before the conversation can continue, Iris and Liz bust in gangsta-style, guns blazing in slo-mo, no less, with Donovan and Elizabeth squarely in their path of mayhem.

The Countess shows us a nifty way to utilize a sealed hallway, and Donovan and Ramona put their plans to...