It’s pretty clear that checking into the establishment at the center of American Horror Story: Hotel will be hell on the characters involved, but what about viewers? Special Contributor Tracey M. sheds some light on the grim goings on in the FX show’s new season. – David F. 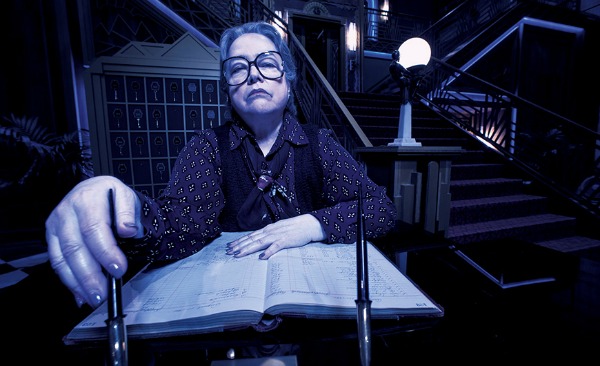 Our latest incarnation of American Horror Story introduces us to some very disturbing characters, with equally disturbing stories. The opening credits roll, with subliminal flashes of the ten commandments. I wonder how they will fit into this season of misfits.

Let’s enter the Hotel Cortez, it’s a cavernous but somehow suffocating old building with many shadowy places for things to hide. Light fixtures line every wall, but there’s an unnatural darkness there.

Two girls (Helena Mattsson) (Kamilla Alnes) visiting America from Sweden, probably for the first time, choose the Hotel Cortez for their stay in LA. The hotel clerk, Iris (Kathy Bates), checks them in, and shows them to room 64. The girls settle into the room, but soon notice it smells bad. The smell seems to be coming from the bed. They pull off the linens discover the mattress is roughly stitched together down the center, so they cut it open. (Of course they do – it’s American Horror Story, not American Logic Story!) A horror of a creature claws its way out of the hole, terrifying them out of the room.

Iris is at the front desk checking a young addict into the hotel. Hypodermic Sally (Sarah Paulson), also an addict, is in the lobby smoking a cigarette and licking her chops. She calls “dibs” on the young man. He is given room 64, where he prepares his works and injects his poison. A male creature emerges from the shadows, and proceeds to rape the young man. Not sure why we needed that Deliverance moment. Sally walks in and stoops to watch his face, asking him to tell her that he loves her. He says it to her repeatedly, until his eyes glaze over. Not yet sure what Sally’s deal is. Her smeared makeup and crazy in-your-face eyes make me a bit nervous. She’s like Raggedy Ann on heroin!

Detective John Lowe (Wes Bentley) has received a strange phone call regarding some recent LA murders, and the information leads him to Hotel Cortez. He asks to see room 64. Iris summons Liz Taylor (Denis O’Hare) to escort Detective Lowe to the room. Liz is fabulously channeling his inner Cleopatra, minus the wig. Once In room 64, John looks around but finds nothing. He decides to lay down on the bed. Seriously? Nothing like mysterious disappearances to lull you to sleep in a funky room.

Enter the Countess (Lady Gaga) snorting copious amount of white powder, before being escorted out of the hotel by her beau, Donovan (Matt Bomer). They spread a blanket at an outdoor movie screening, and perform lewd and suggestive acts to seduce a couple sitting beside them. The couple takes the bait. Looks like they’re ready to fly their sexual freak flags and they head back to the hotel with the Countess. The four begin to make love. Naked and feasting on sex and swapping, the unsuspecting couple are just blood donors to the Countess. She and Donovan slit their throats with their sharp fingernails. The couple bleed out, and the Countess and Donovan feast on some blood before sharing a bloody kiss and, of course, a cigarette.

Iris has our two Swedish girls almost naked and caged in the basement, feeding them raw meat smoothies to make them more tasty for the Countess. Sally walks in as Iris tries to force a feeding tube down one girl’s throat and thinks she can do a better job. Sally opens one cage and the terrified girl darts out and makes her way up to the lobby. There, she runs into the Countess, who slits her throat with that long, silver nail. Iris is warned to take better care next time, before the Countess departs in all her finery. Iris watches the spreading pool of blood. I’m starting to believe there is no check-out at Hotel Cortez. You check into it and it checks into you.

Detective John Lowe is out to dinner with his young daughter, Scarlett (Shree Crooks). They enjoy their sushi, and discuss their memories of Holden, Scarlett’s younger brother. He disappeared from the merry-go-round at a carnival back in 2010, and it’s broken the family. Mid-conversation, John gets a disturbing text from his wife, Alex (Chloe Sevigny). She needs his help and has included an address. He arrives at the house at the same time the police do and his cell rings. It’s his wife’s number, but on the other end is that same mysterious voice that led him to Hotel Cortez. He tells John he promised he’d do it again. Now Scarlett’s screaming, and when John finds her, he sees why. There are two nude, disemboweled men, hung spread-eagle from their bed frames. The voice is indeed a man of his word.

Alex is freaked out that someone used her number to get to John. He promises police protection for as long as is needed. Alex is still grieving for Holden. She says she can barely look at John anymore, he looks too much like Holden. She walks away, leaving him to chew on that for awhile.

Marcy (Christine Estabrook), a realtor, walks into the hotel lobby with a man named Will Drake (Cheyenne Jackson) and informs Iris that he is the new owner of the Cortez. She and Liz are stunned. The Countess seems to know Mr. Drake. His son, Lachlan (Lyric Angel) wanders about, touching everything, as children do. As Will and the realtor continue touring the hotel, the Countess takes Lachlan on a little trip. They enter a room filled with flaxen-haired children, games, candy and toys. Lachlan is introduced to a small tow-headed boy. His name is Holden (Lennon Henry). Holden asks Lachlan if he’d like to play.

Iris is upset about the new owners. Turns out Donovan is the reason she continues to work at the hotel, plus, there are secrets to be kept.

Flashback to 1994, and Hypodermic Sally and Donovan stagger into the Cortez to get high in her room. Liz is working the front desk when Iris rushes in. That’s her son with Hypodermic Sally! She runs after them and eventually finds Sally’s room to discover her son has overdosed. A very high Sally giggles her way down the hall with Iris right behind her. Iris pushes Sally out the window at the end of the hall. She falls many stories and dies on the pavement below. Iris goes back to her son’s body, to find the Countess admiring his jawline.

Detective Lowe has decided it would better for Alex and Scarlett if he moved out of his home for a while. He checks into the Cortez, room 64.

This opening episode was a bit bloodier than necessary, but the characters we met are intriguing and complex. I plan on staying at the Cortez awhile, my room’s already paid for…