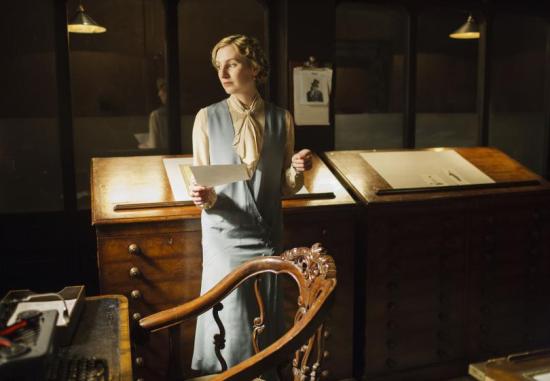 Downton Abbey has a new player, Glimmer of Hope. In this exclusive interview, the newbie explains that it will be involved in Lady Edith’s storyline.

TVRD: So, Hope, tell us a little bit about your character?

Hope: Well, Lady Edith has been suffering since the very beginning. Her luck has been awful and she’s dealt with all sorts of barbs from Lady Mary and even Lord Grantham and Lady Cora have gotten in a dig or two.

TVRD: What will you be doing on the show?

Hope: Giving Lady Edith a life of her own and a bit of, dare I say, happiness?

TVRD: How do you intend to do that?

Hope: Well, for starters, I had a sit-down with Julian Fellowes to discuss his abusive treatment of Edith, who has been portrayed as the unlovable one.

TVRD: What was his response?

Hope: He’s a cryptic one but he did seem to be open to the possibility of letting Edith have a fighting chance. It’s hard to say how serious he is, though. The rug has been pulled out from under her feet in the past.

TVRD: She has had some romantic problems.

Hope: That’s an understatement. She got some attention from that sketchy burn victim, who claimed to be the presumed-dead Patrick Crawley. That’s the one that was supposed to marry Mary and inherit the estate but died on the Titanic. This guy told Edith that he always loved her, not Mary, which is unlikely but then Lord Grantham got some evidence that “Patrick” was a big faker, so the dude just up and disappeared. He left  a vague goodbye letter for Edith so she’ll never know if he was the real Patrick or not. Then she was all set to marry that really old guy, Strallan, but he ditched her at the altar in front of all the wedding guests. She finally had a chance with Michael Gregson, who was age-appropriate and not a conman, he ended up getting killed by Nazis.

TVRD: At least Edith has Gregson’s daughter now so somebody loves her.

Hope: Too bad she can’t reveal that little Marigold is her child and not just her ward, but admitting to having a love child wouldn’t make Edith’s life any easier. it’s better than nothing. Now that she has inherited Gregson’s magazine, Edith really has something to occupy her time but that’s only the beginning.

TVRD: What else do you have planned?

Hope: She needs to get as far away as she can from that pack of jackals she calls a family. Her mom Lady Cora drifts about in some sort of haze and is never helpful and Lady Mary is a sociopath. You probably heard about the vagina killings. Fortunately, there’s the flat in London. And she just became reacquainted with Bertie Pelham, he seems to like her. There’s only one concern.

Hope: I’ve only been signed to a short-term contract. So my days might be numbered. I am concerned that I’ll get killed off.

We love your witty comments, they don’t appear right away but we promise we’ll get to them.