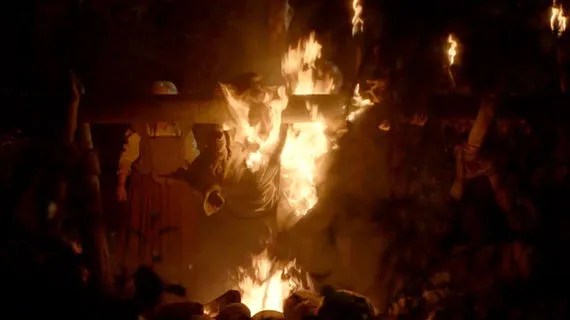 Shelby is running, running away from the scalped man, away from the strange forest, but still lost. There are torches glowing ahead. She peers from behind a tree. A witch (Kathy Bates) is preparing for a sacrifice. Surrounded by her followers, she speaks incantations. By the light of the torches, Shelby sees a man bound hand and foot. He’s been accused of stealing. The group places a hollowed-out pig’s head (so that’s what happened to the rest of porch pig) over his head and proceeds to bind him over a fire pit, where he’s roasted like a rotisserie chicken.

Shelby is horrified, and is spotted by the witch, who demands that her followers seize her. Scared out of her wits, she runs as fast she can, and winds up in the road, almost struck by Lee’s car. She faints and Lee takes her to the hospital. When she regains consciousness, the police come to speak with her. She tells them what she witnessed, but of course they could find nothing. Shelby is tested for hallucinogens. Matt arrives at the hospital and promises Shelby they’ll find another place to live. Shelby’s angry, she blames the hillbillies for staging an elaborate hoax (I don’t think they’re that smart) and says she will not be scared out of their home. They’ve invested too much to just walk away. What!? Shelby’s the one who didn’t like the house in the first place! Maybe she is on drugs.

Meanwhile, Lee prepares for her bi-weekly visitation with Flora, though she is uneasy about bringing her to the house. Once settled in, Flora confides in her mom about a new friend she met in the house, Prescilla (Estelle Hermansen). She tells Flora she’s tired of all the blood – never a  good thing to hear.  A window shatters in another room and Lee investigates. She finds a vase of daisies, and a bonnet scattered among the broken glass. Lee ought to exit stage-left at this point. Hasn’t enough happened already?? This house makes “Murder House” look like a five-star hotel.

That night, Matt and Shelby are awakened by the squeals of a pig. Shelby is pissed off and ready to fight for her home. She and Matt grab flashlights and head into the woods. They find the fire and what’s left of rotisserie man. They call the police and finally have some evidence of their claims. The officers grant the Millers 24-hour police protection until they can figure out what’s going on.

That night, a ringing phone wakes Matt. He runs downstairs to answer it. There’s a woman’s voice, weak and pleading for help. Matt notices the phone isn’t plugged in (c’mon, time to go) then hears voices coming from another room. He sees two nurses, sisters Bridget (Kristen Rakes) and Miranda (Maya Berko) treating an elderly patient cruelly. They accuse her of not taking her medicine and shoot her in the head. They spray paint a huge, red M on the wall. M for Margaret (Irene Roseen). They laugh and laugh. Matt runs outside to the squad car on duty, and tells the officer what’s going on in there. Of course, there’s no evidence.

The next day, Lee’s ex, Mason (Charles Malik Whitfield) comes to pick up his daughter after her visit. She’s hiding, it’s her favorite game. She’s found in a closet under the stairs, talking to Prescilla. Flora says she was going to give her favorite doll to Prescilla so she wouldn’t kill them all, saving her for last. Well, that’s all Mason needed to hear. He swears Flora won’t be coming back to that house, and he’s calling the judge about the custody agreement. This pushes Lee over the edge and she loses her sobriety. Later, Matt and Shelby find Lee liquored-up and slurring her words. Matt helps Lee to bed. Passed out in her room, she’s soon flanked on both sides by the laughing nurses. Lee is startled out of her stupor by the presence she feels in her room.She heads out into the hallway to find bloody parts of something wiggly nailed to the wall and squirming. Lee is terrified, but the bloody nightmare vanishes. She turns to face the mirror in the hallway, and sees a bloody pig-man standing behind her in her reflection. She tries to pull herself together.

Matt has joined Shelby at a downstairs window. Shelby sees a young girl across the yard. Matt sees her, too. They head outside to where the girl was standing and find a storm cellar.  It’s deep and dark, so Shelby and Matt decide to climb down the ladder. Of course they do! Down in the storm cellar, it’s clear someone made this their home. They find a video recorder and take it into the house to watch what’s been recorded. It’s the former resident of the house, and then the storm cellar, Professor Elias Cunningham (Denis O’Hare). The man is clearly scared out of his wits.Teetering on the edge of sanity, Dr. Cunningham says the forces in that house injured him and drove him out. He zooms in on an extreme close-up of the scratches on his neck. This doc’s a mess. He tells the rambling story of the nursing home where two nurses took pleasure killing their elderly charges and after leaving the nursing home, the sisters set up shop in the house so they could continue their atrocities, using the letters of the unfortunate patients’ first names to spell out MURDER, spraying each new letter on the wall.

Dr. Cunningham insists something in the house stopped them.The nurses got as far as MURDE. Eventually the wall was covered with wallpaper to make the house marketable but the letters would bleed through any attempts to cover them with paint. The doctor reacts to sounds from behind him, there are sounds of a struggle, he screams, and the tape ends. Matt finds the suspect wall, and peels the wallpaper back. MURDE is clear as day. Well, that did it; the Millers finally want out of that house. They haggle with the loan officer, wanting out of their contract and accusing him of misrepresentation. They did their homework and verified what Dr.Cunningham said on the tape. The loan officer says they took the house “as is” and there’s no way to break their contract. Okay, now the Millers are getting with the program; they’ve seen enough horror for two lifetimes. During all this, Lee takes it upon herself to go and pick up Flora. She desperately misses her daughter – enough to commit a felony. Matt  tries to reason with his sister. Mason calls the house, furious. Shelby talks him out of involving the police, and he says he’s coming to pick her up. While doing her homework, Flora sees her friend ”Prescilla” outside and goes out to meet her.  When Lee goes to get Flora ready for her father, she’s nowhere to be found. Shelby, Matt and Lee search the house, then the woods for her. Lee screams when she sees Flora’s jacket hanging from the very top of a dead pine tree. What fresh Hell is this?!

The premier of American Horror Story takes us to Roanoke Island, North Carolina, where an entire colony of English settlers,...