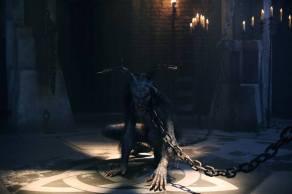 First Appearance: “And the Abyss Gazes Back”

Backstory: When Daniel Boone‘s (Robin Strasds) traumatized brother, Squire, returned from Valley Forge, he suffered from an affliction. Daniel took his brother to the Shawnee because he believed Squire might have the “Curse of the Wendigo.” The man-beast’s transformation is triggered by blood and the creature can not return to human form until it has fed on its victim’s organs. Once the Wendigo has turned four times, it can never be human again.

Recent Developments: The late Sheriff Corbin‘s son, Joe, was afflicted with the curse, courtesy of a hexed letter sent by Henry. With help from Ichabod, Abbie, Hawley, and a Shawnee shaman named Frank, Joe received a cure.