The Crawleys Evicted from Downton Abbey 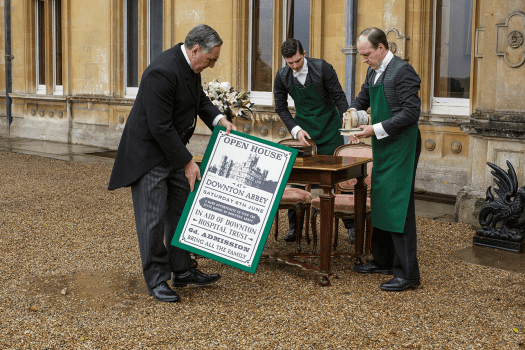 Another day, another Crawley family drama. In an exclusive interview, Downton Abbey, the Crawley’s ancestral home, says there is friction within its walls and it wants to see the nobles kicked into the street. The latest scandal erupted during a house tour.

TVRD: What’s the story behind your falling out with the Crawleys?

Downton Abbey: It’s been a long time coming, I’ve been putting up with a lot of antics for years, but the final straw came when they opened the doors to the public.

Downton Abbey: Yep, it has to do with that hospital subplot which nobody cares about. It is the least interesting subplot ever and that is saying something.

TVRD: Were you annoyed about having strangers traipse through the rooms?

Downton Abbey: That didn’t bother me, it was a chance to show off my grandeur. What bugged me is that not one of these dim bulbs knows anything about me. All these years together and to find out that none of the Crawleys knows the first thing about the artwork, architecture and history, it’s disheartening. Whenever a visitor asked about a detail, they looked like deer in the headlights.

TVRD: Why do you think that is?

Downton Abbey: Could be that they are self-absorbed nitwits. Lady Mary spent years trying to work around the entailment so I thought she would have more information about the home that has belonged to her family for generations. In fairness, she is quite busy gazing at herself in the mirror and being bored by all the men who are in love with her.

TVRD: How about Lady Edith? She must be knowledgeable about the estate.

Downton Abbey: Not really. I was surprised because she’s spent so many years being loveless and alone that you’d think she would have had more time for reading and studying up. On the other hand, she’s been plotting her escape from these jackals for years, so it probably never felt like home to her.

TVRD: What about the Earl of Grantham and Lady Cora?

Downton Abbey: He’s still recuperating from a burst ulcer and didn’t have anything to do with this so I’ll give him a pass. But there is no excuse for Lady Cora. She’s always drifting through the halls in a haze, I don’t know what she does all day. Maybe if she put down the painkillers and brandy, she’d have more time to learn about her home. She’s an American.

TVRD: Would you say you’re resentful?

Downton Abbey: Damn right, I’m bitter. Not only do I know all about the Crawleys, I know about monkey business in the servants’ quarters. That Thomas Barrow is always up to shenanigans. Quite a few of them have rap sheets and I’m not just talking about Mr. Bates. I know about Anna Bates’ pregnancy. I know about Mr. Carson’s and Mrs. Hughes’ sex life, which, shudder. Thank God they have their own cottage now because that’s TMI. Oh, the things I’ve seen. One time Lady Mary killed a man with her poisonous vagina.

TVRD: Would you care to expand on that?

Downton Abbey: I’ve said too much.

2 thoughts on “The Crawleys Evicted from Downton Abbey”

Drama has struck the denizens of Downton Abbey yet again. At one time, the manor house was the epitome of...