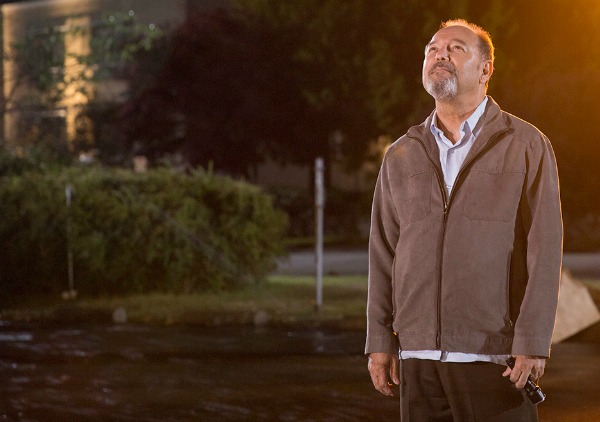 The Season 1 finale for FTWD takes us deeper into the apocalypse, and Special Contributor Tracey M. walks us through all the changes taking place in the world of our band of survivors. – David F.

“The only way to survive in a mad world is to embrace the madness.” – Strand

As night falls on LA, Maddie, Travis, Daniel, and Ophelia leave in their vehicles soon after they see troops heading out.

Now that he’s tortured information out of Corporal Andy Adams, Daniel just wants to shoot him in the head and be done with him, but Andy tells the group he’s their only hope of finding their way through the detention center. After Travis tells Daniel there’s been enough violence; Daniel allows Andy to ride with him. Their three-vehicle caravan pulls up to the gates by the guard tower. Daniel uses the keypad to open the gate, and the guards on duty threaten to shoot him. He suggests they save their bullets — he points to a herd of the infected headed toward the open gate.

Daniel, Travis and Maddie drive to the compound’s parking garage. Daniel notices that Colonel Adams is missing from Travis’ pickup and is ticked off, but not surprised. He figured Travis would let the guy go. Really, didn’t we all? Adams did provide directions, however. Maddie asks Alicia and Chris to stay with the vehicles while they gain entrance and try to locate Griselda, Nick, and Liza. Strand and Nick are just across the hall, but no one can open the door separating them, and the infected are closing in. Liza saves the day with her security pass and opens the door in the nick of time. They have to fight off the infected, remembering that their brains are the vulnerable area. Even Travis gets in the swing of things.

Back in the hospital, Liza finds Dr. Exner among the patients left behind. Liza implores her to come with the group, but she refuses, Dr. Exner sees the area outside has been invaded and has ended the lives of all of her patients with her air gun. Liza can’t believe her eyes once she finally gets outside.

The distant pop of gunfire means things are in motion. Strand knows they are likely to be abandoned and pats his suit pockets for the key. Nick holds up the key and smiles. Strand smiles back. They move stealthily through the building. There are many dead, and a few being feasted on. Strand isn’t intimidated by the infected; Nick accepts them like they’ve always been there. Strand makes a point of stopping to see one of the guards. He is mortally wounded and being eaten alive. He begs Strand to kill him, but Strand only take backs his diamond cufflinks and the poor bastard’s pistol. You’re a cold one, Mr. Strand!

While waiting for their families, Alicia and Chris stand by the cars. Three troops run out of the building and demand the SUV. One soldier gets a bit too friendly with Alicia, and Chris gets pissed and takes a swing at him, only to end up socked in the chops and on the ground. Hey, he tried.

Maddie and the gang make it to the parking garage and everyone is reunited. Corporal Andy Adams pops out of nowhere with a pistol; he wants Daniel. The group tries to reason with him, but he ends up shooting Ophelia in the arm. Huh? Travis flies into a rage and takes Andy down, pummeling his face beyond recognition. Oh yeah, bring it, Travis! Andy is left on the concrete as the group gets ready to leave. Strand insists that Maddie go west, not east. He claims to have a secure home on the water. He says he must get to Abigail, but doesn’t volunteer too much information. What is his this guy’s deal? He never seems to say enough.

The two remaining vehicles take off west on the highway and Strand gives directions on how to get to his place. He welcomes them into his beautiful, waterside home. Hmmm, I thought the whole house on the water story was a bunch of b.s. Strand talks the talk AND walks the walk. His home is spacious, opulent. Lots of glass walls with breathtaking views of the cliffs and ocean all around. This guy’s got money, but that’s all we know.

Maddie and Nick take a break on the patio. She apologizes for letting him be taken by the troops. He says things feel weird, different. The life he sees everyone else living now is a life he’s been living all along. Pretty deep analogy, dude. You just can’t hate Nick. For all he’s done, he’s really a good guy who got a little lost. I can’t help but like him and want him to survive because I think he can really thrive in this new world.

Nick finds Strand packing and says he must stay in motion. Everyone has to leave the house, he says. Nick’s confused. Why are they there in the first place? He shows Nick some binoculars mounted on the deck. Nick peers in and sees “Abigail,” Strand’s beautiful yacht. Further down the beach, Liza’s shows Maddie where she’s been bitten by an infected person. She asks Madison to please shoot her.

Travis follows the women and overhears their conversation. He desperately wants there to be a way to save Liza, but there is no cure for the infection. Travis and Liza cry together and say goodbye. Travis takes the gun and takes care of Liza himself! Big Boy Pants, Travis! The gunshot echoes. Alicia and Nick hear it. Chris hears it. Travis cries on his knees in the surf, and Maddie comes to comfort him. They kneel and stare out at the ocean, the waves splashing their legs. Travis is now fully immersed in the new normal and you kind of have to feel for him.

This is a strange new world. For me, the season finale of this new prequel brought up some East Coast/West Coast differences. Here in the East, we call them zombies, biters or walkers. On the West Coast, they are the infected. Here, we know how great the right shot to the head can be. In LA, the military fires wildly but the infected keep coming forward. No one knows what to do! As I watch, I find myself fighting the urge to shout at the screen, “The head, aim for the head!!!” I know what to do, I roll with Rick Grimes. I do like these characters, even though we only got six episodes with them this time. I look forward to seeing them all again, especially Nick and Maddie.

I hope to see you here next week after the Season 6  premiere of AMC’s The Walking Dead. It airs Sunday, October 11 9/8c

Special Contributor Tracey M. looks at how truth, lies and life plays out for the survivors as the military takes...