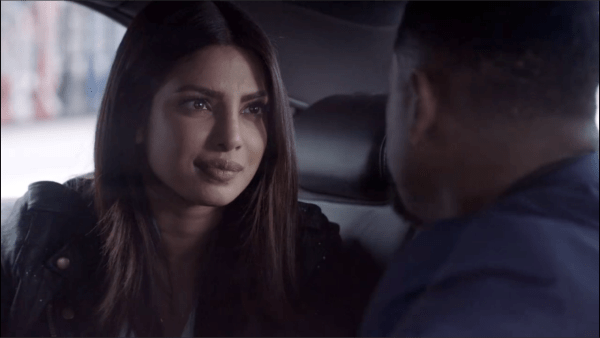 To take down a terrorist you have to become one and that’s what the gang has done. It’s been 100 days since Roarke took office and it’s time for the Constitutional Convention. Will they finally take down the Collaborators once and for all or will Roarke eliminate them like he did Alice Winter?

The team is now in charge of recruiting new employees for DISA, Roarke’s new intelligence agency. Sixty-two days until the Constitutional Convention and they can’t find many good candidates. Fast-forward two months, with only two days left and they haven’t made much progress. Oh boy.

At Gold Leaf, Ryan and Alex are happily back together, while Clay and Shelby are closer than ever but not yet official. When the bar closes for the night the team turns their favorite spot into the new bunker pulling computers and files out of the walls and even, the pool table. Way to use your resources guys!

Roarke needs 38 states to officially amend the U.S. Constitution. He has 34 yes’s and 12 definite no’s. The team has to work to make sure the four swing states are no. They ditch their good-guy ways and blackmail the four representatives to have them vote no to save the nation. While celebrating their flipping success, Maxwell Fletcher (Ideology) walks into the door.

He praises them on their creativity in hiding spots but points out how they fail to notice the obvious: new smart TVs with microphones that Peter Theo (Technology) installed. Not only were they caught by the Collaborators, but now they’re out of DISA. Honestly, that may not a bad thing.

Clay mentions if Theo will spy on them, he surely spies on Roarke and the other Collaborators. This means if they can hack into Theo’s systems, they might be able to find enough dirt to take Roarke down once and for all. Alex knows the perfect guy to recruit and  help them betray the country: Will Olsen.

At the convention, Roarke brings Clay into his chamber to threaten him, but Clay gets the last laugh. As he leaves, he places a small camera on the door frame that could come in handy later. In the lobby, Shelby runs into Maxine who is there to protest. She reveals to Shelby that Clay actually kicked her out and “didn’t want to tarnish her good name” in the midst of the political upheaval with his family. Shelby is obviously shook but she can’t wallow in self pity because the plan is officially in motion.

Roarke officially begins the convention stating his home state wants to change the language of one amendment. This is proof that he took the Russian bait. Then on cue, Alex’s face is projected on the room’s giant screen. They play video from the small camera Clay placed in Roarke’s chambers showing he spoke with Russia before he walked onto the convention floor.

Alex continues to blast Roarke by revealing the Collaborators and how they used fear to control America. The team has this plan down to a science. On cue, Iris and Will release all the surveillance they have on the president to 100 major law firms and civil liberty organizations to comb through.

In true Quantico fashion, Alex comes bursting through the doors never breaking eye contact with Roarke. She admits she’s breaking hundreds of laws by revealing classified information but says it’s her duty to the American people to keep them safe from Roarke. Then she gets shot.

So Miranda shot Alex and in the ambulance Ryan is blubbering over her body. But SIKE, it was all part of the plan. Unfortunately for Ryan they couldn’t fill him in on the whole “Alex gets shot” part because they needed his reaction for believability. All he can say as he wipes away his tears is, “How did I do?” Lol.

Will and Iris tell Alex her death certificate is ready to go but it will only buy her time. She plans to disappear for while since she’s been made and well, broke hundreds of laws. In precious Ryan fashion, he will follow her to throw off any tails. How cute, he’s always looking out for bae. Sadly Ryan doesn’t make it all the way to the hangar to say goodbye after having to lose a tail. Instead, Owen is there to prep Alex with her go-bag. They have a precious mentor-mentee moment before she boards her plane to seclusion.

In Roarke’s chambers, Clay comes face-to-face with the president once again. The man knows he’s done and talks about how the other Collaborators can buy their way out from this scandal, but he can’t. Clay sympathizes and leaves. As Clay is walking away, he hears gunshots from the chambers where Roarke just shot himself.

Shelby finds Clay sitting on the steps as Roarke’s body is being wheeled away on a stretcher. She asks how he’s doing and he says, “I won, I think.” Sad to think that this is winning when four of eight Collaborators are dead. Shelby tells him that she talked with Maxine and reveals what she said. She tells him she’s not the one for him and that Maxine is.

Two months later, the gang is together in the bunker. Well, part of the gang. Owen and Shelby are there along with Raina and Nimah who are out of prison, and Clay and Maxine who are married after eloping. Owen reveals Miranda will be in prison for a bit, but that’s the sacrifice she made. Owen is also the new Deputy Director of the CIA to reshape the agency. Congrats!

But the finale doesn’t end there. We flash back to the moment Alex is on the plane alone, or so we think. Ryan was there the whole time. He comes out of nowhere, sits next to Alex and introduces himself recreating the moment they first met before Quantico training in Season 1.

Alex: “You really want to do this? Give it all up for me?”

Ryan: “I’m nothing when I’m not with you. Wherever you run, that’s where I want to be. If you’ll have me.”

Alex fights back tears (and so do I) making it the most pure and beautiful moment in Quantico history.

President Haas has resigned, leaving Henry Roarke to take her place. Clay follows in his mother’s footsteps and leaves the...