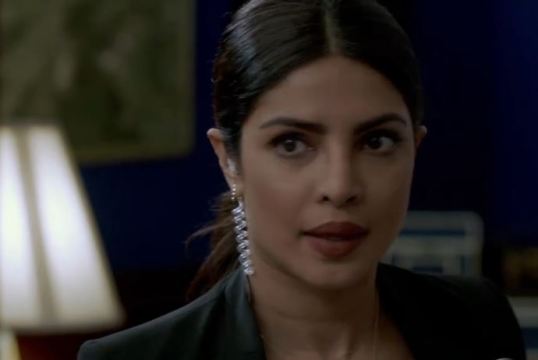 The gang has uncovered two of the eight names they need to fill in the collaborator puzzle. While the team is slowly kicking ass and taking names, they don’t realize there are bigger issues at stake. Leon was taken and is dead, meaning while the team is hunting down bad guys, bad guys are also hunting them.

The two masked people who left Leon to die in a bathtub are now setting up their next victim. The deadly duo lay out blue prints and a laptop filled with Arabic symbols in someone’s apartment to make them look like a terrorist. Rude.

In the bunker, Clay starts by giving Nimah props for catching their latest ping. Their target is socialite Rebecca Sherman. She downloaded material about the U.S.’s vulnerabilities in passport control earlier that day. This woman is crazy connected and she could be the glue that holds the entire scheme together making her the third puzzle piece, Logistics.

Rebecca is not only a socialite but a party planner, from weddings to ‘Tinder Parties.’ Lucky for the team, their high-and-mighty leader is engaged, meaning Clay is about to be their bait. Of course, he isn’t totally on board.

Thank God for Harry because he points out how Clay never does the dirty work. This ends up guilt-tripping the ‘First Baby’ into the con. Clay and his fiance, Maxine, plan to meet with Rebecca to consult them on their future wedding to gain access to Rebecca’s personal computer.

At Rebecca’s home, Maxine and Clay go to ‘view the gallery upstairs’ while Alex, who is posing as secret service, pulls Rebecca aside to ‘get security details down.’ While Rebecca is psychoanalyzing Alex in the kitchen, Clay is upstairs searching the socialite’s computer.

He’s also doing this in front of Maxine who has no idea what Clay does for a living. Since Maxine isn’t too fond of secrets she storms out of the house alarming Rebecca. She goes upstairs and catches Clay at her computer. Instead of threatening Clay and Alex, Rebecca asks for their help. She said someone is trying to kill her.

Twist! Rebecca is not an evil mastermind, instead, all her parties she’s thrown over the years has brought together the group of collaborators the team is trying to bring down. Rebecca told them that the reason she hacked into the passport system was to find a way to escape with her family.

She gives the team the name of a lawyer, Thomas Roth, making him the fourth puzzle piece and the face of Law. With the team watching and listening, Rebecca schedules a meeting with Thomas in the middle of Central Park. The signal the team was using to listen in on goes dead and in seconds, Thomas and Rebecca are shot dead on site.

Everyone spreads out to find the shooter immediately. Lucky for Harry, he spots a guy carrying a guitar calmly away from the scene. He catches up the mystery man who turns out to be Sebastian. Dun Dun Dun.

Remember that apartment from earlier? Come to find out it was Rayna’s, Nimah’s twin sister. As she walks in she sees the setup right as Nimah is calling her. She can’t answer the phone because she’s too busy trying to fight off the two masked people who are trying to kill her. Great.

And if that’s not enough, Harry finally calls Alex hours later after not returning from the mission. He tells her not to worry and that he’s quitting the team because it wasn’t the right fit for him. Sadly she believes him. He only said that because Sebastian had him at gunpoint.

It wouldn’t be Quantico if friends didn’t turn on friends, huh?

The gang has successfully solved their first case and uncovered the first piece of their tangled AIC puzzle. But no...