First Leon is killed, Raina was attacked by two masked figures and now Sebastian has Harry held at gunpoint. Things aren’t looking too good for the gang as their friends and family are being picked off one by one. Could this be the beginning of the end for the team? 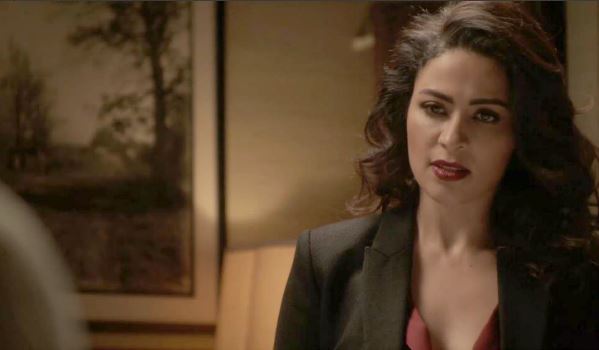 Last time we saw Raina she was being abducted. Now, she’s sitting at The Gold Leaf pretending to be her sister Nimah. Alex thought she was meeting Nimah, but when really it’s Raina. Raina tells Alex she was attacked and her apartment was set up to look like she was planning an attack.

Cue the text messages to the team because something has happened and they are to report to the bunker because a bomb went off at an Ohio shopping mall. The suspect is a woman wearing a hijab similar to what Raina typically wears. Coincidence? I think not.

Of course this is the work of the collaborators. But why such a public attack? They have kept their dealings under wraps until now. Either they’re getting more confident or they’re sending the team a message. Clay mentions he saw a money trail a week back, but since nothing came of it, he figured they ditched whatever they were planning. Sadly, that wasn’t the case. It was all a political ploy by the collaborators. The House of Representatives has a vote on S322, a national entry-exit registry system. The system would allow Homeland Security to keep tabs on non-American citizens from countries they believe could cause concern which most are exclusively Arab or Muslim. Hence Raina’s possible framing.

Let’s also not forget that the Speaker of the House is Henry Roarke, aka the collaborators’ Government piece. Now, the team’s job is to make sure S322 is never passed, because that’s what the AIC and collaborators want. It hasn’t passed two times before but with the bombing and a Muslim woman being painted as a terrorist, it’s likely to. The gang isn’t only trying to save one of their own this time, they’re trying to protect the millions of Muslims in America.

While everyone else is in the bunker trying to figure out which way the representatives will vote, Alex is on the Farm with Raina trying to figure out who framed her. Rayna said she and Leon were investigating these people to try and get to the truth about the AIC. After Raina gives Alex a lead, Nimah tries to make amends with her estranged sister. After what Nimah did during the G20 Summit, Raina can’t find it in her heart to forgive her.

Owen and Alex find one of the people who attacked Raina at her apartment. The attacker said the people who hired him are going to kill him because Raina’s body was supposed to be in the mall rumble after the bomb went off. hile they try to cut a deal with the informant they get bombarded with hundred of bullets in a massive shootout, leaving them with a dead informant and without the information they needed. Seems like everyone struck out.

Clay, Nimah, Shelby and Ryan are on The Hill trying to secure swing votes to make sure the bill doesn’t pass. Nimah and Shelby learn the votes will ultimately come down to President Haas. Everyone knows she’ll veto it which will lead to an uprising, with any new acts of terrorism blamed on her — the entire goal of the collaborators and Roarke. Oh, and to make things worse, during the vote the media names Raina as the terrorist.

To save her sister and to right all wrongdoings since the G20 Summit, Nimah decides to turn herself in, as Raina. Nimah knows these people from the team’s research and she’s better equipped to survive. Talk about taking a move from ‘The Parent Trap.’

In the bunker, Clay is watching the news about his mother vetoing the bill. Of course everyone is up in arms about her decision and Clay feels it’s his fault. He even reveals to Shelby he tried to persuade her to pass the bill even though it goes against what he believes. Disappointed in his actions, Shelby does what she does best and meddles. She grabs her phone and makes a phone call to the only person who can help the Haas Family: Caleb.

The gang has uncovered two of the eight names they need to fill in the collaborator puzzle. While the team...