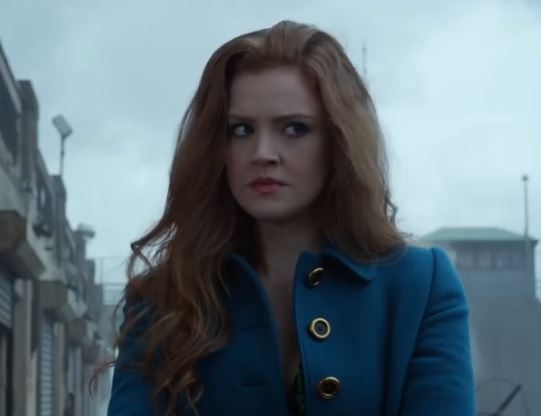 Last week’s episode of Gotham ended with a bit of suspense and it continues this week. Capt. Barnes decides to serve true justice. Selina Kyle gets a surprise visit from an old friend. And Ed Nygma suffers a devastating loss, which I think I can say that a lot of us can understand. Might as well get started, shall we.

As things open the GCPD precinct is abuzz with activity in the aftermath of the events that occurred at Lee Thompkins’ engagement party. A mobbed-up surgeon was murdered there and, before he died, named his killer to Jim Gordon. It was Capt. Barnes. Gordon questions Lee about Barnes’ activity at the party and she quickly figures out what his angle is. He then mentions his theory to Harvey Bullock who can’t believe him but agrees to help Gordon just to prove Barnes’ innocence. Meanwhile the good captain is elsewhere serving out ‘justice’ on three criminals that he has been investigating for quite some time. The three, a sex trafficker, a drug dealer and a murderer, all meet the hangman’s rope. Barnes, of course, is the hangman.

Upon arriving back at the precinct, Barnes finds Jimbo in his office going through the files on his desk. Gordon claims that he was looking for the file on the Paulie Pennies murder; Barnes quickly hands him the file. He then questions Jimbo about finding the body of the murdered doctor. Barnes says witnesses saw Gordon talking to the doctor before he died. Gordon says that the man was just mumbling. Barnes then tells Jimbo that an informant gave him the name of the murderer and invites him to go along for the arrest. Gordon calls Bullock and leaves him a message about what’s going on. On the way, Gordon questions Barnes about his doings at the party. Barnes, of course, denies having anything to do with the murder. He implies that he’s out to clean up all the crime in the city and invites Jimbo to join him.

When they arrive at the suspect’s hideout they question him for a bit and Barnes kills him. The dead man didn’t kill anyone, Barnes says, but he was definitely not innocent. After getting Jimbo to move the dead man’s body, the captain admits to not only killing the doctor but also Paulie Pennies. Barnes then tries to reason with Gordon again to get him to join his crusade against crime. No luck, Jimbo will have none of it. However this does lead Gordon to figure out that Barnes has been infected by the virus in Alice Tetch’s blood. While Gordon says that this proves Barnes is ultimately innocent, Barnes intends to frame Gordon for these crimes if he won’t play along. Gordon won’t play, but before Barnes can shoot him they are interrupted and Gordon makes a break for it.

Bullock comes back to the precinct to find that all the cops in the city are now on the hunt for his partner. Barnes, true to his word, has called in and framed Gordon for the murders. Gordon manages to call Bullock and tells him what’s going on. He just has time to give Bullock his location before Barnes shows up and sends Jimbo on the run again. Bullock finds Lee and tells her what’s up. They agree to help Gordon. Meanwhile Barnes pursues an un-armed Gordon and catches up with him.

Of course a bit of the rough and tumble follows, in which Gordon is able to obtain Barnes’ pistol. But Barnes is able to retrieve his shotgun and the two end up in a stand off. About that time Bullock and the cops arrive on the scene and, hearing a shot, bum rush the building. They find Gordon, holding a smoking gun, standing over a fallen Barnes. Gordon shot him in the shoulder. The cops take him into custody.

Back at the precinct again, Gordon runs into Lee and thanks her for cooking up evidence pointing to the fact that Barnes was infected with the Tetch virus. The two have what appears to be a brief moment and then all goes back to normal.

Next we find a physically mature Ivy Pepper (Maggie Geha) back in Gotham plying her new trade. She’s using her new found good looks to entice wealthy men into giving her whatever she desires. In this case she’s managed to charm a distinguished older gentleman collector into not only letting her into his home, but also allowing her into his vault where she absconds with what appeared to be a priceless jewel necklace. She was unable to do this without some difficulty, however. Although she was able to use a perfume she created from a plant compound to entice the collector to open the vault for her, the effects of the perfume wore off too quickly, and the old man figured out what was going on and tried to stop her. In order to escape, Ivy resorted to knocking the old man out.

Next she turns up at the hideout of her pal Selina Kyle. Of course Selina doesn’t recognize her at first. After all Ivy was aged up a bit by one of Fish Mooney’s genetically modified goons. Once Selina realizes who Ivy is she’s shocked and calls her new boyfriend, Bruce Wayne, who immediately shows up. Ivy then busies herself eating Selina out of house and home while she regales her friends with her latest exploits. She tells them how her looks have helped in her efforts to move up in the world. When Selina presses her about why she has shown up after so long, Ivy confesses to her latest crime with the necklace. She was looking for a place to lay low for a bit. About that time the three are attacked by masked intruders armed with bows and arrows. They just barely escape using one of Selina’s secret exits.

While they’re on the lam Selina questions Ivy about who’s after her. Ivy reasons that it must be people after the necklace. After a heated discussion, Bruce tells Ivy that he’ll pay her for the necklace and then they can return it and get the goons off their tales. Sounds easy enough.

When they go to return the necklace they find the old man dead on the floor with an arrow through his eye. Obviously that necklace is in big demand. Selina tosses the necklace on the floor and suggests that they scram. Ivy goes to pick it up and finds that it contains a hidden key, probably the reason why it’s so popular. Bruce suggests they head to his place. Back at Selina’s, the masked men are giving it a thorough going over when they find a box in a hidden compartment that appears to contain info on the murders of Thomas and Martha Wayne…. how interesting.

While having breakfast with the mayor, Ed Nygma gets a call from the cops requesting his presence. He arrives at the precinct to find his new lady love, Isabella, laid out on a table in the morgue,  apparently the victim of a car accident. The cops claim that she must have fallen asleep at the wheel and then her car was hit by a train as it ran through a railroad crossing. Ah, but we know better now don’t we dear readers. In a fit of jealous rage Oswald had on of his minions cut the brake lines on Isabella’s car, thus sealing her doom. Penguin takes the opportunity to console his chief of staff, and the object of his desire.

Back at the mayor’s mansion Ed falls into deep, deep despair. Nothing that Oswald can do will pull him out of it. However Ed does believe that visiting the scene of Isabella’s death, to pay his respects, might help him. At the railroad crossing Ed notices that it is just four blocks from Isabella’s apartment. He next encounters a blind homeless man who was present at the time of the accident. This guy tells Ed that although the can’t see he did hear Isabella screaming for help at the time of the crash. Now walking around with a big sign over his head, flashing the words, ‘Denmark – something rotten in the state of’, Ed heads off to the precinct. Upon inspecting the car Ed finds that the brake lines have been cut.

Ed returns to the mayor’s mansion, demanding to speak to Oswald. Oswald apologizes for not being so understanding about Isabella’s death. A rather flustered Ed somewhat ignores this as he tells Oswald about his discovery that Isabella was murdered. Ed then announces that he knows who the guilty party is — Butch! Oswald quickly agrees and then swears to Ed that Butch will be found and made to pay for his crimes.

As things fade to black this week we see a straight-jacketed Barnes locked away in Arkham screaming at the top of his lungs and proclaiming all around him, ‘Guilty!’

Pal, you don’t know the half of it.

This was a bit of a violent week for some of the denizens of Gotham as Capt. Barnes begins to...