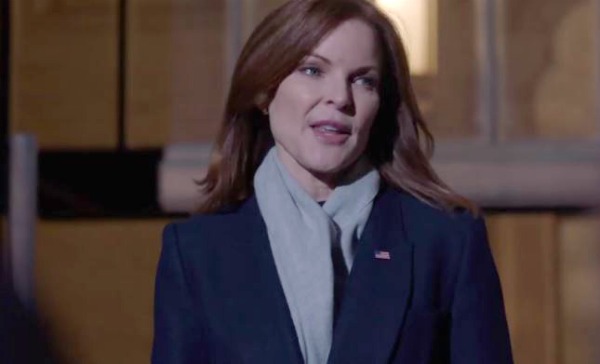 Leon is dead, Sebastian is still holding Harry hostage and Nimah is turned herself in as Raina. Ugh. But there is good news for Quantico fans: Caleb Haas is back! The president’s youngest is finally rejoining the world after being MIA the last season. He didn’t leave on the best terms with the team, but his charm could always help patch things up. Or can it?

Starting off in the bunker, Owen says they’ve received five pings in five different cities across the nation meaning the Collaborators could be creating a riot in one of the locations. Clay wants to run scared and end the entire mission, but sadly for him his team is made up of the country’s strongest agents. They stand up to him and vow to take down the Collaborators no matter the cost.

Because they’re brilliant, the team figures out the targeted city is Cleveland. There, a jury is in deliberation over the case of a man accused of shooting and killing an intruder with an illegally obtained gun. Even though the intruder killed his wife, if the defendant is found guilty his life is over. It’s all happening in Cleveland because the former president, whose cabinet President Haas served in, created a bill about owning illegal firearms. Emotions are running high around this case and a guilty verdict will set off a political reaction that will harm President Haas’ status and take her down. – which the Collaborators want.

When Clay decides to go see mommy dearest in the White House in an effort to disband the team, guess who’s waiting for him there: Caleb. Man, I missed this guy. Disagreeing with Clay, the president thinks he should change up his plan of attack instead of give up. Thankfully that plan involves Caleb.

In Cleveland, Shelby, Alex and Raina are there to convince the special agent on the case their help is needed. Unfortunately for them that special agent is none other than American traitor and their former FBI trainer, Miranda. This should be fun.

Because Miranda is smart she knows the trio is not there to help her and she calls Raina out for not being Nimah. Seems they’ve forgotten that Miranda basically created the twins at the academy. Even with Miranda breathing down their necks, they’re able to get the jurors’ personal information so they can get into their heads and influence the verdict. Alex was able to get one juror to admit the case judge, Judge Kaplan, is pressuring them to a guilty verdict.

The three, unfortunately with Miranda in tow, confront the judge. He admits to being blackmailed into a forced trial, but before he can call it a mistrial they’re informed the jury had already reached a verdict and it’s guilty on all counts. Let the riots begin.

Shelby calls Clay to warn him that Roarke plans to be on the Cleveland courthouse steps to “calm the crowd down.” The Collaborators were using the trial to win the will of the people. Gross. Surprisingly, the recently nervous wreck Clay tells Shelby to relax because “he’s got this.”

He’s right because just as Roarke gets to the steps Madame President herself is standing there with a smile on her face. Oh, the Haas family is good.

Not only is the Haas family good, but Clay feeds her Roarke’s speech from when they met earlier at the Capitol and Roarke offered Clay a job. The crowd eats up her words of encouragement and you can almost see the life drain from Roarke’s eyes. For once, the gang won.

Alone in the bunker, Owen jumps an intruder who copied files off one of the laptops. That intruder is Sebastian. Ryan appears and the two learn that Sebastian is a current operative working undercover. Not only did he let Harry go (thank goodness), he said he discovered their secret team when he followed Thomas Roth on the day he and Rebecca Sherman were shot in Central Park.

Sebastian admitted he didn’t shoot the two and even gave Owen and Ryan what they’ve been looking for this entire time: the names of all eight Collaborators. He made a deal with them to share any information from here on out. Wow, a second win for the day.

That evening, Shelby goes to thank Clay for not giving up on them. As she’s about to leave her former beloved Caleb enters the room. Shelby swiftly tries to leave because Caleb’s ignored her efforts to contact him for weeks. Goofy Caleb is awesome, but he’s not 100 percent awesome. He tells Shelby that whatever she has going on with Clay (nothing) needs to end or he will make her life a living hell. Um, okay.

Now let’s talk about Ryan’s personal life for a second because while all of this has been going on, his love life has been quite interesting.

Ryan has been casually dating/trying to get intel on a journalist named Sasha who is a possible Russian spy. Suspicious of her, he bugs her apartment. He’s correct because after he leaves, Sasha opens a hidden back to her wardrobe and grabs multiple files with photos of the Collaborators and Caleb Haas’ attached.

Later, he overhears recordings of Sasha speaking in Russian. She mentions Ryan and plans to meet with someone at The Gold Leaf bar. Once there, Ryan learns he’s been tricked since Sasha found his bug. She in turn gives him her apartment key so he can search her it himself for any secrets. Any trust Ryan had goes out the window when he finds a bug inside the keys. Did this girl really think he wouldn’t find it?

While the key bug might have been dumb, Sasha is smarter than we’re led to believe. She contacts Patrick Theo, technology Collaborator, and begins questioning him on the other confirmed Collaborators. He hangs up quickly when he realized where she was going. Maybe she is one of the good guys. She tries to prove that when Ryan tries to return her apartment key.

Sasha tells him she has to run down a lead but to meet back at her place in an hour. Well, that probably won’t happen since her car blew up right after she got into it.

Poor Ryan, he can never have anything good.

First Leon is killed, Raina was attacked by two masked figures and now Sebastian has Harry held at gunpoint. Things...