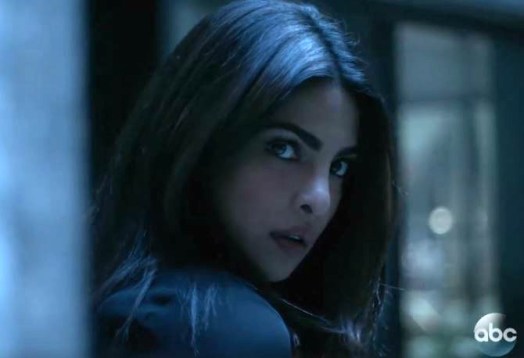 After last week’s bombshell that Miranda is one of the terrorists, we find out this week that her scheme isn’t going quite as planned thanks to her former recruits. A few blocks away Alex continues her kick-ass ways as she uncovers the deception amongst the terrorists.

We begin with handlers Nimah and Shelby are with Ryan and Alex trying to figure out what information they’ve gathered from fellow recruits because, you know, that’s the whole point of them being there. No surprise they’re failing at making friends.

They have to take the information they barely have and bug only one of their fellow classmates who they’ve dubbed the AIC. That’s CIA backward, how clever. Nimah encourages Ryan and Alex to get their fellow recruits to open up so they can choose the right one to bug. That calls for only one thing: alcohol.

After a round of shots, we learn that Leon spent some time in prison and Dayana might know a little something about it. This, of course, leads our dynamic duo to put their sights on bugging the lawyer or photojournalist.

The next day instructor Owen gives them their next skill: assessment. The recruits have to constantly be aware of their surroundings. Makes sense if you want to be a good spy. They practice in at a local bar where new girl Leigh shows off her skills. At their second location, Leon has a panic attack in a coat closet and Dayana mentions six months of solitary confinement. Possibly PTSD?

And, don’t forget about Lydia. She sees a bombing on the news and calls someone named Lucas begging him to call her back. When she gets ahold of him she begs to go back overseas on a spy mission, but according to Lucas, she can’t go. Being stubborn, Lydia fights him but Lucas ends with, “Don’t lose sight of the forest just because you think you’re in the weeds.”

Now that the recruits have done their small challenges, Owen says they’ll partner up and go into an office building for the real test. After choosing their pairs they head outside where the group is ambushed with bags thrown over their heads. When they see light again they’re spread out in the middle of the woods. All they have is their partner and a note written on their forearms: “Be back before dark.”

While everyone had pairs when they started no one sticks with them, besides Alex. She’s a girl on a mission and she won’t stray. Alex tries to dig for information from Leon. After a slow start, she learns the photojournalist wanted to expose the cartel prisons in Mexico. Little did he know that was a big mistake.

Ryan ditches Doyle when he sees Dayana alone. He pushes her on how she gained additional information about the recruits. She’s a lawyer, but Ryan believes she’s a lawyer for the CIA. It’s his only explanation for her demeanor.

Once everyone is back to the Farm they get yelled at for it taking four hours to come home. It apparently should’ve only taken them 20 minutes. Owen gives them a piece of advice that must come from the CIA handbook: “Never lose sight of the forest, even when you’re in the weeds.” See, told you it would make sense. Lydia’s head darts straight at her father with a knowing look. Sound familiar?

Lydia storms Owen’s house demanding to know why she was grounded. Apparently, daddy-o wanted to see his daughter more which was why she got sent to the Farm. She leaves, grabs her phone and says “I’m in. Tell me what to do” to an unknown person.

Back in the cottage Nimah, Shelby, Ryan, and Alex are deciding who they’ll bug. Ryan makes the decision to target Leon. But, plot twist! After the bug is placed there’s interference, meaning someone bugged the Farm because they’re onto Ryan and Alex, or someone else is undercover.

While the gang is worried about the bug they should be keeping tabs on their old friend Will Olsen. Doyle finds him at a bar and introduces himself as Julian. This can’t be good.

In the present everyone is still a hostage while Alex finds a bin full of black clothing and masks, identical to those worn by the terrorists. Nothing like hiding in plain sight. As she is changing she notices a white pill in the sleeve of the shirt. Seems that could come in handy.

At FBI headquarters Shelby tells Miranda she wrote an in-depth analysis of the operatives after they apparently shut it down earlier. Miranda’s face says “good job Shelby” but her eyes indicate something ominous. Shelby hands over a thumb drive with the analysis to Miranda when her computer crashes. Miranda was behind the crash obviously wanting to erase all information from the case, but Shelby says she has a hard copy as she leaves. Let’s hope she didn’t just put a target on her back.

Alex is now in the midst of the terrorists when Ryan hatches a plan to create a diversion. Their good buddy Doyle is right there to help start a fight. Doyle takes the fight to heart and kicks Ryan into a terrorist, who is the disguised Alex. Ryan begins choking her to death before she is able to whisper his name. He stops when he realizes it is Alex and, well, so do the other terrorists.

Both are carted away and Alex is taken to a staircase where her assailant says she’ll die.  Alex makes her move and takes down the terrorist. She rips off her mask and demands answers but the woman won’t talk. Remembering the pill, Alex shoves it into the woman’s mouth and it quickly kills her.

In classic Alex fashion, she has to act quickly to deal with the aftermath of her actions. In the hostage room, Raina is trying to gather information when the dead terrorist crashes through the glass ceiling with a message pinned to her chest: “2 Down.” Raina smiles and says, “Alex is alive.”

With that, Alex walks away placing the terrorist mask back on her face ready to face her next obstacle. #GirlPower

The trainees have decked the halls at the FBI Academy. It's a week after Christmas, but the show wants to...