Warning: We only care about Jamie and Angela. If you don’t believe Jamie and Angela are perfect and beautiful and the stuff of unicorns, gumdrops and rainbows, you’re just going to get all mad and start complaining because Jamie is married to Tasha and blah, blah, blah. Proceed at your own risk. 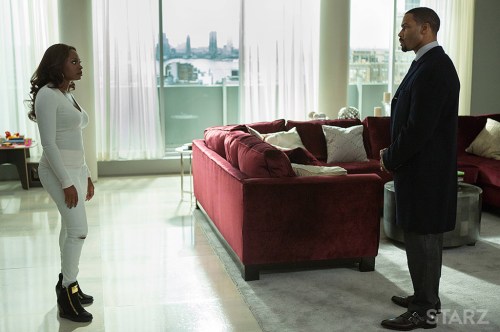 The long national nightmare is over, Power is back, baby! For those just tuning in, Power is a show about James “Ghost” St. Patrick and Angela Valdes, the high school sweethearts who were reunited and all set for a wonderful life in which Angie would make googly eyes at Jamie, and Jamie would stroke Angies’s magnificent chestnut tresses. A few things blocked their path. Jamie never mentioned that he was a top-level drug dealer and she forgot to mention that she was a federal prosecutor working on a drug task force to bring down someone named “Ghost.” The crazy kids patched things up and Angie didn’t tattle, in fact, she destroyed evidence implicating Ghost. Jamie pinky-swore that he’s out of the drug trade forever. Let’s go!

Jamie is now focused on his nightclub empire. Jamela step out of a limo and it goes like this:

Angela: Wow, the nightclub looks great. You look great, but nothing in the world looks as great as my magnificent chestnut tresses. They are so great they move in slo-mo.

Jamie: Yeah, baby. You know what else is great? I’m totes legit now so don’t worry about my former life as a top-level drug distributor. I’m not Ghost anymore; I’m not even “G.” I’m James and it’s all smooth sailing from here.

Jamela: Okay, it’s 13 minutes in and we haven’t made everyone swoon with steamy sex, so let’s get to it.

The Audience: I’ll be in my bunk.

Tommy Egan: You just do that, Audience. I don’t care about my best friend formerly known as Ghost. He walked away from the business we built just so he could avoid imprisonment and continue to be lovey-dovey with Angela.

Holly: Hi Tommy. Don’t worry about the friend formerly known as Ghost. You have me and the dog. The cute dog, who everyone thought was going to die last season but now it looks like the dog is going to be okay.

Tommy: Holly. I don’t have time to talk. I’ve gotta go do something related to the plot.

The Plot: Something or other about drugs. It doesn’t involve Jamela being madly and love and having sex, so move on.

Greg Knox: Hi Audience, you may remember me as a federal agent who works with Angie. She’s my ex-girlfriend and I didn’t mind it when she used me as a doormat. But now I know she is in love with our prime suspect, so I stalk her. Fun fact: Stalking Angie is a departmental no-no, so I’m on suspension. I must prove to the agency that instead of arresting Ghost like she was supposed to, Angie let him pet those chestnut tresses. Despite advice to just let it go, I will stare at all the pictures and clippings on the requisite FBI Wall of Surveillance. One day I will make sure Ghost goes to prison and I will have Angie all to myself and I will say: “It puts the lotion in the basket or else it gets the hose again.”

Jamie returns to his mansion in the sky to talk to his estranged wife. It goes like this.

Jamie: Don’t call me that! My name is James now.

Tasha: I’m going to start off on a salty note. I was supposed to run away with Shawn the Chauffeur and then somebody put the audience out of their misery and killed him. Was it you?

Jamie: Funny story: Shawn was supposed to kill me because he wanted to please his father, Kanan. Shawn is a better driver than hired assassin so I talked him out of it. Shawn went to Kanan who did what any dad would do, he gunned down Shawn. How else will kids learn, amirite?

Tasha: What will I tell the kids? They loved Shawn.

The Audience: They did? We hardly ever see them. Didn’t you used to have three kids? We never see more than two at a time.

Tasha’s Too-tight White Outfit:  Maybe I shouldn’t be in this scene … or this decade.

Earlier decades: Leave us out of it.

Tommy gets done doing plot stuff and comes home. It goes like this:

Holly: Hi Tommy. What are you doing?

Tommy:  Just sitting here being mad that my bromance with Ghost is over. Oh, my phone is ringing.

Lobos: Hola! you might remember me as the whimsical yet dangerous head of a Mexican cartel. Don’t tell anybody I’m alive. Everyone must think that the jailhouse hit was effective because of something involving the plot. I’ll help you do something or other with the drug business as long as you kill Ghost. If you don’t listen to me, I’ll kill Holly and the dog.

The Audience: No, not the dog!

The Plot: Mike Sandoval, an FBI big shot and Angie’s boss, is working with Lobos because something, something, cartel.

Tommy has to do some plot so he bubble wraps a couple of extras and pushes them off a roof. He’s being extremely reckless and not handling business with the same aplomb as Ghost, so he’s screwing things up already but in a humorous manner.

Jamie and Angela have dinner. It goes like this:

Angie: I noticed some shady business at the nightclub so I’m mad that you might still be involved in crime. I’d like some duck sauce.

Jamie: I don’t do anything shady now. My name is James. Anything else on your mind?

Angie: I believe you. But I’m not sure I believe you. I’ve been watching you. If your name is still Ghost, then I could lose my job. Oh, Lobos is alive, but plot something. You’re in the clear. I’m glad that Ghost is dead and Lobos can’t cause any trouble. What does my fortune cookie say?

Tommy has finished up doing something about the plot and returns home, it goes like this:

Tommy: Where are you, Holly? This apartment is too quiet. Why isn’t there barking? Oh, look there is some blood on the floor. Let me follow the trail.

The Audience: Damn it, we knew that dog was never gonna make it.

Jamie makes a phone call, it goes like this:

Jamie: Hi Tommy, call me. This is about plot. I’m Ghost again.

We enjoy thoughtful and witty observations from Power fans. Comments don’t appear right away but we promise to get to them.