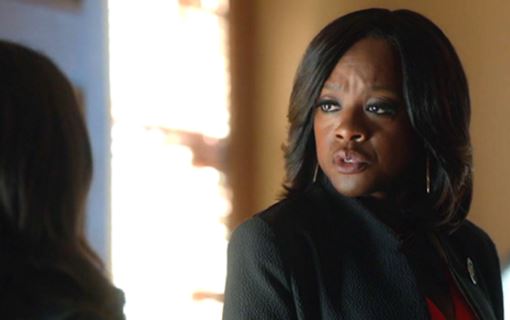 How to Get Away with Murder is always crazy, but this episode took it to 11. Here are stream-of-consciousness ramblings on the biggest shockers from the latest episode.

1. Mr. Sexy Cop and Oliver are in a fierce battle for the role of Poor Edith. Now Nate’s in trouble for his cancer-ravaged wife’s death; she asked to put out of her misery. This series is not called How to Get Away with Mercy Killings. He gets off the hook thanks to some machinations by his lawyer, Eve, who is Annalise’s sultry former lover. Her ex is representing her ex. They tamper with a blood sample, but at this point, Nate should do whatever it takes to avoid another murder trial. Oliver, your move.

2. Laurel is working hard to be the most useless member of the Keating 5. Laurel whines to Annalise because she wants approval for her creepy relationship with Frank. Annalise does not play that game; she tells Laurel: “Go back to the office and stop being needy.” Laurel also embraces a dumb trope. When characters go undercover, the actors like to show off with made-up accents. Laurel uses a cutesy Spanish accent while evidence-gathering, it’s pointless. If her ruse is detected, nobody is going to say, “Oh, it can’t be her. She looks exactly like the woman I talked to, but that one had an accent.”

3. Everyone thinks Annalise and Wes are doing it. Eve questions Annalise’s relationship with Wes. Professor Keating says she doesn’t have sex with her students. She doesn’t mention dirty-dancing with them.

4. Annalise eats pub appetizers. She and Eve order mozzarella sticks and potato skins. It’s hard to imagine Annalise gnawing on buffalo wings, but it could happen.

5. Sam had quite the insurance policy.  When fantasizing about an expensive Paris trip, Annalise tells Eve: “Oh, that’s not a problem, I’ve got Sam money.” If only she would use some of it to move out of her dark and creepy house.

6. We Finally Know Who Wes Is!  Annalise tells Eve, “It’s him.” Thanks for clearing that up, Annalise. Since “it’s him,” she should also use some of that Sam money to get “him” out of that crappy apartment.

7. Frank is disturbing. When Oliver makes a comment about not being as hot as Connor, Frank notes: “Seriously, I’d spank you before Walsh.”

8. Bonnie needs to have a seat: Okay, Annalise did blab to Connor about Bonnie’s incestuous pedophile father, so Miss Winterbottom has cause to be upset. (She’d really be pissed if she knew that Annalise showed Connor the video.) Annalise did it to save Bonnie from a murder rap and Bonnie should already know about her unorthodox methods of getting shit done. She had the nerve to say that Annalise doesn’t know how to love anyone. La Keating doesn’t care for that sort of talk and retorts: “Alright. When you go back to that fancy apartment and roll around in bed with that 25-year old boy and you’re not hanging from a bedsheet behind some metal bars, then you tell me that I don’t love you.” Bonnie ups the insults by saying: “I want you to die.” Shut up, Bonnie.

9. Bonnie also needs to Netflix and chill. In the flash-forward, we see that she’s the one responsible for this season’s mystery. Miss Winterbottom appears to have shoved her nemesis Emily Sinclair off a roof. This show should be called How to Get Away with Bonnie’s Murders.

10. Oliver’s life sucks. After helping out the Keating Five, Oliver returns to his apartment and doesn’t lock the door. Enter quiet loner, Phillip, who the gang has been trying to find. He is aware of Oliver’s cyber-sleuthing. Bye Oliver. He’s probably not dead, but even if he lives, his life will still suck. Poor Oliver.

We love thoughtful and witty comments, they don’t appear right away, but we’ll get to them.

Miss Shonda doesn't get enough credit for dropping truth bombs about race, gender, sex and status. There have been some...