If you thought things were getting better for Jim Gordon and happier for Penguin, well, you really don’t know Gotham, do you? Check out the dire doings in Special Contributor Ralph S. latest recap. – David F. 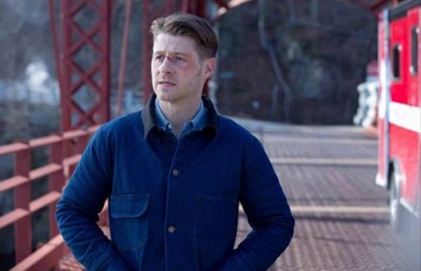 As the episode opens we find Jim Gordon in the slam settling into the routine of prison life. Things seem to be rather mundane for him until one day when the warden pulls him out of line to deliver some unsettling news. It seems Jimbo’s been in protective custody and now the warden’s decided to move him into the general population and on to F-Block also know as ‘World’s End’. When escorting Gordon to his new digs the warden explains that ‘World’s End’ got its name because there are only two ways off the block, parole or death. “And nobody gets parole,” the warden says.

Life on this block is certainly different, Gordon quickly learns. He quickly figures out that the warden is on the take and that Jimbo himself is not on the warden’s list of favorites. We even see the warden quickly planning Gordon’s demise with another inmate named Weaver.

Bullock pays Jimbo a visit to let him know that D.A. Harvey Dent is looking to reopen Gordon’s case, but it’s going to be a while. In the meantime, Jimbo has to keep his cool and not get involved in any mishaps, something that might be a bit difficult when the warden is trying to have you put down for the dirt nap. Bullock also has a bit of bad news for Gordon. It seems that Lee Thompkins, Jimbo’s pregnant fiancee, lost their baby. She’s moved away and is now out of touch. It really appears to be the world’s end. Bullock reiterates his promise to get Gordon out of this mess, but it doesn’t seem like his partner is hearing him.

Returning to his cellblock, Gordon receives his first beat-down. Weaver steps up and starts to work on Jimbo. The altercation is temporarily halted by another prisoner named Puck who also gets a beating for his trouble. Before things get too out of hand the fracas is stopped by a guard who seems to be looking out of Gordon. Both Gordon and Puck end up in the infirmary just a bit worse for wear. During this little interlude Puck explains his reason for intervening; Gordon saved his little sister a few years back. Puck himself is inside for car theft. The warden arrives and has both men sent back to their cells but not before he and Gordon have a bit of a face off. Threats are exchanged.

After a short stint in the hole, Weaver returns to threaten Gordon some more and then has Puck beaten almost to death. Gordon can do nothing to help him. After Jimbo pays Puck a visit in the infirmary the guard tells Gordon that it’ll be movie night that evening and that all the inmates will be there in the main hall with the lights off. He tells Jimbo to be ready. Sure enough as the movie gets underway Weaver, knife in hand, moves to attack Gordon. In the melee that ensues, Weaver is pushed aside and Jimbo is stabbed repeatedly by another inmate. Gordon lays on the floor bleeding to death as the guards restore order. The guard tells the warden to call for a body bag.

Oswald is also settling in as well. He’s getting to know his new family and enjoying all the creature comforts of his new home. During dinner his father, Elijah, tells the story of how he met and married wife Grace (Melinda Clarke) and adopted her two children. He then makes a point of saying that Oswald is his only living blood relative. At that point the glass in Oswald’s step sister Sasha’s (Kaley Ronayne) hand breaks. It seems to all at the table like an accident, but one has to wonder. As Oswald and Elijah spend more time together we find out that the old man has a hole in his heart, a condition that has him on medication. Oswald is confessing the bad things in his past when Grace interrupts to give Elijah his medicine. Now she knows that her new stepson has a malevolent past and we find out something about her. It seems that Grace is tampering with the old man’s meds so that they will not help his condition. Well, somebody’s certainly digging for gold that ain’t in the ground here.

Oswald’s foul deeds haunt him in his sleep and he wakes up screaming. Unable to sleep, he wanders the house and finds his father sleep walking. Upon helping Elijah back to bed, Oswald continues to tell his father about his past in greater detail. The old man forgives his son and tells Oswald that he can continue to live there in the family home in peace. This peace is threatened when Grace and her kids bring Elijah an old newspaper with Penguin’s face plastered on the front under a headline reading ‘Penguin Busted’. Now it seems that Grace and the kiddies are in fear for their lives, bemused there’s a notorious murderer under their roof. Elijah is having none of this. He’s convinced that his son has changed his ways and even seems to find Oswald’s nickname, ‘The Penguin’ amusing.

The next morning Oswald wakes to find a scantily clad Sasha in his bedroom. It’s clear that she there to seduce him but he quickly refuses her advances (chivalry ain’t dead in this house – yet) and she retreats. Upon fining out that this part of her plan has failed Grace decides that she is going to have to resort to more permanent measures. Elijah’s health worsens and the doctor tells Oswald that his father doesn’t have long. The old man tells his son that he’s going to amend his will so that Oswald will be his sole heir and inherit the entire fortune. He also tells Oswald a bit about the family history. It seems that Oswald’s violent tendencies may be a result of inherited traits. Wouldn’t Hugo Strange have found that interesting?

Grace can’t have Oswald getting in the way of the fortune that she feels she’s earned so she decides to execute the final part of her plan to remove him from the equation. It’s the old poison in the sherry trick. She sets the bottle down as Oswald and Elijah are having a chat. The old man isn’t supposed to drink due to his condition and Oswald pours himself a drink. Before he can pick up the glass Elijah grabs it figuring that it can’t hurt. Well that wasn’t a smooth deduction. The old man dies in Oswald’s arms. Something tells me that this is gonna put an end to Penguin’s future as a reformed, upright citizen.

Bullock has been looking for a way to clear his partner’s name. Knowing that Jimbo was framed for the death of a fellow police officer, he enlists the help of a figure from the past – Carmine Falcone. As always Falcone has a plan and not a small amount of influence. Seems he arranged the little drama in which Gordon appears to meet his untimely demise. It’s all part of a rather elaborate escape plan. Bullock even shows up impersonating a prison guard to aid in the getaway. Gordon, however, won’t go without getting Puck out as well. The escape attempt is successful but Puck dies shortly after they’re outside the prison walls. They meet up with Falcone who offers Gordon a choice. He can either go on to reunite with Lee and they can then go on the run, or he can go back to Gotham, lay low and try to clear his name. It’s an obvious choice. Now we’ll have to see how Jimbo and Bullock go about finding out what really happened.

We have a little wait to find out what happens, though, as Gotham‘s next air date will be April 11 when it returns with the “Into the Woods” episode.

It's a bad, bad day for Jim Gordon, a fortuitous one for Penguin and a rather invigorating one for young...