Things are shaping up to be a real hot mess in Gotham this week. Dwight fires up the movement for Jerome. Oswald gets home help that he really doesn’t need. And Maria Kyle’s maternal intentions come into question. Well, not a moment to waste, shall we. 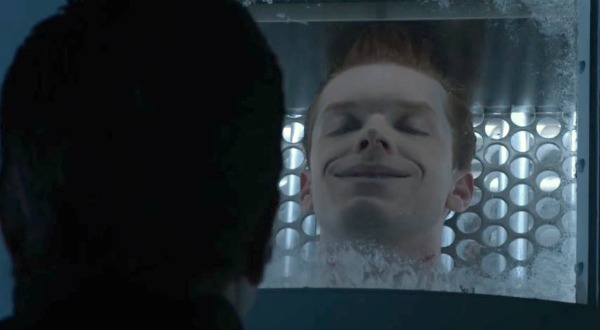 As our story opens Dwight (David Dastmalchian) is busy retrieving a frozen Jerome from the warehouse where we found him last week. The guards provide little resistance even after wounding one of Dwight’s gang. Of course after the deed is done Jim Gordon and Harvey Bullock arrive on the scene and we find out that the warehouse belongs to Wayne Enterprises and it houses all the stuff that was removed from the Indian Hill facility. Lucious Fox shows up and explains to Gordon how Jerome’s body can be reanimated. The process could take three hours at most. Before taking off though, Gordon finds the wounded gang member and takes him back to the station instead of the hospital.

Gordon and Bullock go to work questioning the little thug. He tells Jimbo that Dwight’s network is much larger than the cops know. With help from Lucious the boys get a bead on where Dwight may be holding up. As the cops assemble, a mole in the department makes a call warning Dwight’s sidekick that the cops are on the move.

At the same time Dwight is busy trying to bring Jerome (Cameron Monaghan) back from the dead. It doesn’t go so hot. Jerome won’t wake up. Then there’s the matter of the anxious group of misfits eagerly waiting at another location for the resurrection of their leader. With his back up against the wall Dwight tries to get creative. He hacks off Jerome’s face and, using it as a Halloween mask, goes to face the mob. At first it doesn’t go over to well. The mob isn’t buying it. But, just like the real-life trump fans, soon enough they begin to buy into the lie. It’s time to move on to the next phase.

When Gordon and Bullock arrive at the now deserted location they find Jerome’s body — minus his face. This puzzles the detectives a bit and they take the body back to the station where Lee Thompkins can have a look at it. It twitches. In the meantime, Bullock, Fox and Gordon discover the mole’s existence. Gordon expertly smokes him out. As Gordon and Bullock wait for the traitorous cop to get info, Lee walks in and shoots the guy up with truth serum. She’s still really pissed at Jimbo for killing Mario, by the way. The guy gives up the next part of Dwight’s plan. They’re taking over a TV station. The cops speed off again to save the day.

When Lee walks back into the morgue she finds that her table is empty and Jerome is up and at ‘em, bandaged face and all. Jerome takes a few minutes to have a reluctant Lee catch him up on all the events that went on while he was, well, dead. Lee does tell him what’s most important to him, the location of his face. He heads out to get it back.

Bullock, Gordon and the Strike Force arrive at the TV station and begin to try to get control of the situation. The cops gain entry to the station and quickly defuse the situation. Gordon captures Dwight and puts him in a car sending him to the precinct. Too bad he didn’t pay attention when he took custody of Dwight. Gordon gets a call from Lee telling him that Jerome is back from the dead.

Meanwhile back at stately Wayne manor young Bruce Wayne is still on a mission to help patch things up between Maria Kyle (Ivana Milicevic) and her daughter, a wary Selina. Bruce receives a visit from Cole Clemmons (P.J. Marshall) who claims that Maria owes him a considerable sum and if she doesn’t pay up he’ll go to the cops and unload all the info he knows concerning Maria and one of her recent criminal endeavors. The price is $200 grand and if it isn’t paid in 24 hours Cole promises that the next conversation Selina has with her mom will be in the visitation room at Blackgate prison.

Of course, Bruce is rather sincere about parents playing active parts in their children’s lives so he ponies up the cash. This only serves to aggravate Selina because since she is still extremely suspicious of her mother’s motives. Sure enough the next time we see Maria she’s with Cole and the two are busy congratulating each other on their big score. It was all a con, or as it’s called these days—a bit of social engineering. But the two don’t get away Scott free. Selina interrupts their celebration telling them that she knows what they’re up to. When Cole tries to go all badass and threaten her, Selina one-ups him and quickly gains the upper hand by holding a knife to his throat. She tells the two that they better exit Gotham. Permanently!

Later Selina visits Bruce while he’s having his daily workout. Words are exchanged and Selina expresses her displeasure that Bruce gave into the con so easily. Bruce says that he paid Maria in hopes that she would stick around and be a mother to Selina. Selina is pissed at Bruce for lying to her and she hits him. She proceeds to take several more swings at him and he dodges them easily, reflexively. He even blocks a kick that she aims at him with ease. We now see the future Batman taking shape. “You know the only reason she tracked me down after eleven years,” Selina tells him. “Was you.” Then she walks out.

Things appear to be going from bad to worse for Oswald Cobblepot. He’s being barbecued in the press for his performance during a TV interview last week. (Gee, how much life is imitating art these days. COUGH ::trump:: COUGH). However it’s Barbara Keane to the rescue. While Oswald does’t seem to be that pressed about his mayoral duties, “The city runs itself,” he tells Babs. She reminds him that he needs to be paying serious attention to his REAL job, running the city’s underworld. He’s starting to look weak among the city’s crime families. She’s set up a meeting for him with the heads of the crime families so he can exert his dominance. When asked why she’s helping him, Babs tells Oswald that the crime lords think he likes her. “And as long as they’re scared of you, I get to keep breathing.” Oswald gets a move on all the while moaning about how he really needs help from Ed Nygma.

When Oswald shows up for the meeting at Barbara’s club he finds that the joint is empty. Nobody showed. Oswald gets suspicious now and figures out that Babs is not only playing him but she’s also making a power play for control of the city’s underworld. We get a glimpse of the old menacing Penguin but then the phone rings. On the line is Tommy Bones, one of the crime lords. He tells Oswald that if he doesn’t relinquish his power they’ll kill Nygma, who they’re holding hostage. Oswald exits stage right in a fit of rage vowing retribution. Afterward Babs makes a phone call to Tabitha who is with Bones coaching him on what to say. Telling Tabby that the plan’s working she hangs up and Tabitha feeds Bones some hot lead. One down. Oswald was right, he just didn’t realize it.

Tabby and Babs meet up at their place along with the remaining crime lords. After complimenting each other on expertly playing Penguin for a sucker, they agree to do away with Nygma once everything is all over and they have that they want. Then they go all Michael Corleone on the remaining crime bosses. Babs gets back on the phone to let Nygma know that he can go ahead with his plans for the Penguin. That he does, phoning Penguin, acting like he’s in danger, and giving his location. Penguin grabs a couple of his goons and storms off to the rescue.

We next see Jerome stapling his face back onto his head. Oh yeah he’s also got Dwight trussed up and surrounded by all kinds of explosives. He managed to abscond with an ENG camera and decides to broadcast his next move to the city. He blows up a power plant leaving the city in total darkness.

Seems like it’s gonna be a hot time in the old town tonite!

“And the last enemy to be destroyed is death.” Stealing a line from Harry Potter & The Deathly Hallows this...