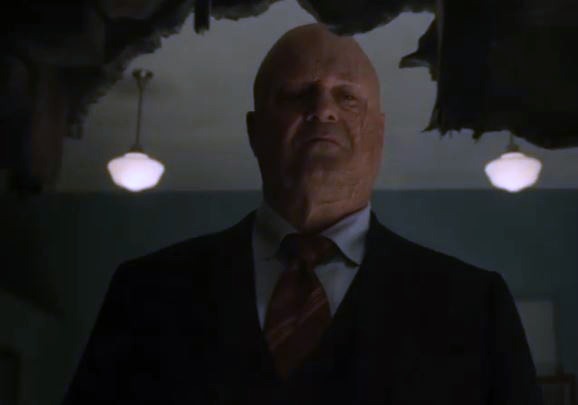 This was a bit of a violent week for some of the denizens of Gotham. Capt. Barnes begins to experience some intense feelings as a result of his exposure to Alice Tetch’s blood. Ed Nygma’s roller-coaster romance with Isabella hits new highs and lows, with some assistance from Mayor Cobblepot. And James Gordon goes back to the GCPD, getting a ‘heads-up’ on clues for his first case. Although Halloween occurred the week before, it’s gonna get rather gruesome in Gotham, so shall we.

Barnes is on his way home from grocery shopping when he notices some suspicious activity occurring on the street. A man covered in blood is getting into a van and speeding off. Barnes follows and walks into a crime scene at the end of his journey. It appears that he’s come upon Paulie Pennies plying his trade. Pennies is an underworld ‘cleaner’, meaning that he gets rid of the evidence of a crime – dead bodies and such. It just so happens that Barnes has come upon Paulie while he is in the process of chopping up and dissolving a body in acid. Not the most civic of professions, but hey, these are hard economic times. A man’s gotta have a livelihood. If you’ll remember Barnes was infected with a drop of Alice Tetch’s blood a few episodes back and its effects have slowly been building up in him. Now, it seems, those effects have fully matured. Barnes loses it and attacks Paulie. Barnes is able to get Paulie to say that someone named the Toad ordered the clean-up job. Having acquired that bit of valuable information Barnes’ bloodlust then takes over and he quickly dispatches with Paulie in a rather permanent manner.

It’s Gordon’s first day back on the detective beat and he and Bullock catch a murder in which the victim has suffered a most violent end; he was decapitated. The victim, of course, is Paulie. At the crime scene even the two hardened detectives are shocked by the gruesome sight. Paulie’s head appears to have been ripped from his body by hand. Ouch! Meanwhile Barnes, fully aware of what he’s done, pays a visit to Arkham in order to speak to the now incarcerated Jervis Tetch. He wants Tetch to tell him how to get rid of the effects of Alice’s blood. Tetch takes great delight in Barnes’ predicament. He wants Barnes to tell him about his symptoms. Barnes does so and then demands to know about the cure. Tetch, in essence, tells him that there is no cure and then he warns Barnes that next symptom to show up will be voices in his head. As the voices grow stronger Barnes will then descend into complete madness. Hmmm, not such a promising diagnosis, is it. Barnes declares that this won’t happen to him but Jervis knows better.

At the precinct, Jimbo has to face an awkward situation. Being back on the job also means that he has to work with Lee Thompkins,  she is the medical examiner after all, and he needs the info she has on Paulie’s case. After an initial few uncomfortable moments the two come to an understanding and agree to work together professionally. Lee tells Gordon what she has found so far and says that she’ll give him the final report when she’s finished. She also mentions that she’s having an engagement party later that evening. Gordon, obviously, won’t be attending.

Gordon also got the report on the body that Paulie was in the process of disposing of. It seems that the victim’s face had been removed prior to his death. When this is reported to Barnes, he says that he wants to be kept informed of every move that’s made in this case. Shortly thereafter Barnes gets info on the whereabouts of the Toad and goes off for a visit. When the Toad refuses to cooperate Barnes hands out a first class ass-whipping and then, using a broken bottle as a means of persuasion, gets the name of a prominent plastic surgeon, a Dr. Simon, as the source for the faceless dead body. It seems Simon is in the business of giving criminals new faces, taken from hapless victims.

Well it looks like there’s trouble in paradise for Ed Nygma and his new lady love, Isabella. At breakfast Isabella dons a pair of glasses exactly like the ones worn by Ed’s ex, the late Kristin Kringle. This sends Ed into a bit of a panic attack and he retreats to the bathroom where he has a rather disturbing conversation with Kristen, who shows up in the bathroom mirror. The mirror image convinces Ed that he’s destined to kill Isabella. Ed can’t deal with this idea so he enlists the advice of a close confidant, Oswald. Penguin, of course is still trying to deal with his own romantic feelings for Ed and sees this as an opportunity. He advises Ed that the relationship with Isabella must be ended for the good of all concerned. Ed knows that he can’t do this deed in person so he sends Oswald to tell Isabella. This Oswald does with relish but it doesn’t seem to be as effective as both Ed and Oswald had hoped. When confronted by Oswald, Isabella figures out that he is also vying for Ed’s affections. She refuses to let Oswald win.

Later Ed shows up at Isabella’s place in answer to a note she sent him. She confronts him dressed exactly like Kristen Kringle. This causes Ed to panic initially but she forces him to face his fear and he slowly comes to his senses. His fear overcome, Ed and Isabella resume their passionate romance. When Ed later tells Oswald that things worked out after all Oswald appears to take the news well. That was just an appearance. Oswald has one of his goons cut the brake line on Isabella’s car. On her way to a conference Isabella’s car is headed straight for a railroad crossing complete with an oncoming train, and she can’t stop. Oh dear!

Barnes goes to confront Dr. Simon and catches him just as he’s about to take the face of another victim. It’s at this time that the voices that Tetch spoke of start to take over Barnes’ mind and he goes berserk on Simon. Barnes manages to control himself and hauls Simon into the precinct. When Gordon asks about Paulie’s killer, Barnes simply says that he’ll get the guy tomorrow. Simon, however, manages to make bail, and the victim, who was on his table when Barnes walked in, refuses to press charges. Ironically enough the doctor ends up at Lee’s engagement party, as does Barnes. Meanwhile Gordon and Bullock find evidence that definitely connects Simon to the body that Paulie was trying to get rid of. Looks like that party is gonna get crashed.

Jimbo and Bullock show up at the party to arrest Simon but before they can get to him Barnes finds him first and corners him in the rest room. However before spotting Simon, Barnes gets called into the precinct and tells an officer to let Gordon know that Paulie’s killer will be coming in to give himself up. Once he spots Simon, though, all that goes out the window as the voices take over. A tussle ensues and as a result Barnes puts Simon through a wall and drops him several stories onto the roof of a car. Inside Bullock tells Gordon that it looks like Simon gave them the slip. Gordon decides to head over to the doctor’s residence to look for him. On the way out he runs into Barnes and Jimbo mentions that he got the message about Paulie’s killer turning himself in. Barnes tells him that this too is a dead end. As this episode comes to its end we see the effects of the blood working on Barnes, he’s starting to see evil everywhere.

Meanwhile, on his way out of the building, Gordon comes across the body of Dr. Simon on top of the car that broke his fall. It seems that the doctor isn’t dead, at least not yet. When Gordon asks him who did this to him Simon is able to give a weak one word answer. Barnes.

Well Bat-fans it looks like we have a gen-u-ine cliff-hanger in the works here. See you next week then. Same Bat-time, same Bat-channel.

Jim Gordon has a mind-altering experience that leads to a career change; Jervis Tetch threatens to make the elite of...