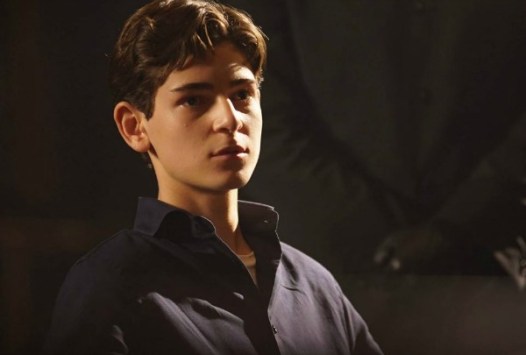 In this episode the plot thickens, or at least it tries to, and the confusion continues. Oswald Cobblepot, aka Penguin, finally gets what he wants, a face to face with Fish Mooney; things don’t go exactly as he planned. Young Bruce Wayne is taken hostage yet again. His captivity is short-lived, but the ransom was rather costly. Gordon makes a deal with the devil to ensure that his pal Bullock can continue to draw breath. Ivy Pepper grows up, with some assistance from Fish Mooney’s goon Marv, but she hasn’t lost her interest in herbology. And as Gordon seeks to heal his broken heart an old flame reappears on the scene. It’s Gotham boys and girls.

At the end of the last episode we saw young Bruce Wayne being carried off into the night by a masked henchman who works for the madam in the mask. Our story this week opens with Bruce sitting before the madam apparently unharmed. Jeez this kid is certainly cementing his reputation as a boy hostage. The madam wastes no time in revealing herself and her motives. She tells him that her name is Kathryn, as she removes her mask, and she wants to discuss the threats that Bruce made at the board meeting in an amicable fashion. Bruce realizes that he’s seen her at some Wayne Enterprises social functions and she confirms his suspicions. She also makes him a simple and direct offer. He can go free, no strings attached – almost. He only need agree to never expose the information that he has on her organization, and he has to drop the investigation into the death of his parents. Of course he wants to know what will happen if he doesn’t agree to her terms. What she tells him just chills him ice cold. If he doesn’t adhere to her wishes she assures him that everyone he cares about will be in constant mortal danger. It doesn’t take him long to agree — and that’s all there is to it. The masked man chloroforms him and when we see him again he’s waking up at stately Wayne manor with a concerned Alfred standing over him. He tells Alfred what went down and the two agree that they have reached a stalemate for the time being.

A much older, though still young and attractive Ivy Pepper awakens to find herself washed up on the banks of the Gotham river. Luckily, for her at least, she’s found and taken in by a well-meaning trucker. He feeds her and offers her some of his ex wife’s clothes. They seem to be getting along fine until she spies him mistreating one of his plants. That ends their short relationship. She exits stage left leaving the truck behind on the floor in a pool of blood. Poor bastard.

Valerie Vale shows up at Gordon’s and entices him into helping her locate Fish Mooney. He gets the million-dollar bounty that Penguin’s offering for her and Valerie gets the story. Her skills as a negotiator are unparalleled. They need to start by finding Selina, so they see Barbara Kean to learn if she knows where Selina is. After Babs spends a bit of time trying to screw with Jimbo’s head she gives up the girl’s location. Valerie then goes off to tell the cops about Fish’s whereabouts and leaves Gordon high and dry.

It seems that Fish Mooney’s situation is getting quite desperate. Every time she or any of her gang uses their abilities, the effort severely weakens them. She knows that her time is running out and she needs to find Hugo Strange because the late Miss Peabody told Fish that Hugo was the answer to her troubles. Thanks to Valerie Vale the cops show up and offer a convenient solution to her problem. After a bit of a tussle the cops manage to apprehend some of her gang but Fish manages a hasty getaway. However Fish isn’t through with the cops just yet. Knowing that they probably know where Hugo Strange is she arranges to quietly abduct Harvey Bullock and get him to spill Hugo’s location. At first Bullock resists but of course a mere touch from Fish quickly changes his mind. He agrees to help her in her quest.

Taking a page out of donald chump’s playbook, Oswald commandeers the attention of the media and uses it to gather together a mob with the exclusive purpose of killing Fish Mooney and her gang. Penguin and his mob then go off on a rampage to find Fish.

Meanwhile Gordon, Capt. Barnes and Lucious Fox realize that Fish has Bullock and that she’s using him to find Hugo. They saddle up and head for the secret location where the feds have Strange stashed away. However, with Bullock’s help, Fish beats them to the spot. The poor soils guarding the spot are quickly dispatched by Fish’s goons and she wastes no time in finding Hugo. Needless to say Hugo’s neither pleased nor surprised to see her. When she tells him her demands, that he fix her and create an army for her, he declines the offer. “I can’t…fix you,” he tells her. Before they can continue this little chat the cops show up. Fish calls Barnes on Bullock’s phone to tell him to back off or else. Barnes has the joint surrounded and settles in for a siege. Just then Valerie Vale and the press arrive to add to the confusion. This lets Penguin know where Fish is and he calls up the posse and heads out.

Penguin and posse show up while Fish continues to threaten Strange to do her bidding. Barnes is not happy about these new uninvited guests and immediately moves to quell the situation. With the press covering the whole mess Oswald and Barnes square off while Gordon manages to find a back entrance into the joint. He gets caught, of course, by Fish’s people. In return for Bullock Gordon promises to help Fish escape the cops. Gordon shows Fish the way out, but not before calling Oswald behind Fish’s back and pulling his coat about the escape plan. That’s how you negotiate: Bullock free, Fish out of the picture and Gordon gets the cool million. It don’t get no better than that. Penguin gets the posse to bum rush the cops, creating a diversion. Fish takes Strange and heads out the back way. The cops and the posse bust in and face down the goons that Fish left behind. A bit of the rough and tumble ensues allowing Fish to make what she thinks is a clean getaway. Wrong! Penguin’s there waiting for her gun in hand. Before he pulls the trigger Oswald has a question that he wants answered. The last time they met she had the chance to kill him and now he wants to know why she didn’t. She explains that she is responsible for creating him and she’s the reason he is where is is today. “Everything I’ve done in my life, possibly the best thing was turning Oswald Cobblepot into the Penguin,” she tells him. “I couldn’t destroy that.” With a tear dripping down his long nose Penguin lets Fish and Strange escape. “Goodbye Fish,” he whispers. “Don’t come back.” Wonder if this means Jimbo won’t get the cool million now?

Gordon and Bullock leave via the front door and Jimbo heads home. Before he can settle into a drink Valerie Vale appears at his door and lets him know that she figured out what went down with the deal between Gordon and Penguin. She lets him know that Fish isn’t dead. As she stands there trying to figure out who he is, Jimbo puts the moves on her and she doesn’t resist. It appears that they’re going to get to know each other much better, in the biblical sense perhaps. Meanwhile, at the train station a familiar figure appears out of the mist, or steam as it were. We see that Lee Thompkins has decided to return to the city. Well, well, well.

Back at stately Wayne manor Alfred and Bruce are discussing their next moves when they hear a noise in the next room. After all the recent events that have occurred they take no chances and tool up, guns and knives at the ready. The quietly move into the room to find an intruder there. The Bruce Wayne clone. Imagine their surprise.

Gotham’s back for season three and while Oswald Cobblepot, aka Penguin, seems to be back on top as the city’s...