So, last time out, it looked like our heroine, Molly Woods was extinct on Extant. What happened on the latest episode. Where’s this show going? Special Contributor Tracey M. leads us through the many twists and turns in her latest recap.  – David F. 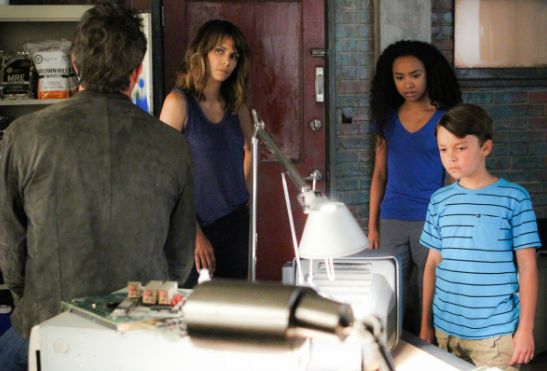 Last week, we left our heroine Molly Woods flatlined and abandoned in the Global Security Commission infirmary. As the building is being evacuated, Lucy (Kiersey Clemons) and her humanich army are searching the premises for the escaped hybrids.

Julie (Grace Gummer) and Ethan are pushed along with the evacuees while General Toby Shepard (David Morrissey) and JD are stuck in an elevator. JD asks for Toby’s tie, which he lights on fire, triggering the elevator’s safety-release. That JD is a regular McGyver! JD refuses to leave Molly behind, dead or alive, so Toby directs him to a stairwell that will lead him to her room.

While in between worlds, Molly has a recurring vision of a mortally wounded JD and a gun in her hand. Lying motionless in the infirmary, Molly suddenly opens her eyes and gasps for air. She looks ancient. She touches her face and hands; they are wrinkled and cracked and her hair has gone white. As she continues to touch her face and hair, her cracked skin peels away. The white hair pulls out easily, and Molly is restored and renewed. Who needs to go to the spa?

Ethan (Pierce Gagnon) has managed to get away from Julie and goes in search of his mother.

Julie chases after him and sees Lucy on the security screen, leading four other humanichs on a search of the building. Didn’t she shut that monster down? Julie makes it her business to stay out of sight.

Ethan finds his way back to Molly’s room and sees she is alive and well, but locked in. Ethan overrides the lock and runs into Molly’s arms. He says he knew she would come back to him. Hybrid Molly’s been having golden-eyed visions of Terra. JD arrives just in time to follow Molly to Virus Containment where Nate informs them Terra (Gennaya Walton) is holding Toby hostage. Nate is stunned to see Molly alive, and advises her and JD not to enter.

Molly has JD on the lookout for any humanichs and goes inside anyway to reason with Terra. Clearly under the influence of Ares, Terra has wired the room with explosives. Molly and Toby work together to successfully talk Terra down. JD spots humanichs on the security monitor and warns the three it’s time to move. Toby directs them to an old evacuation tunnel, and they make it out. Needing to use a secured elevator for her search, Lucy is up against Nate Malone (Michael Gladis). He refuses to allow access to the humanichs so Lucy breaks his neck. They should have dismantled Lucy when they had the chance. Meanwhile, someone has detonated the bombs in Virus Containment and blown out a huge chunk of the building.

JD takes Terra, Ethan and Molly to his friend’s bunker. They turn on the hand-crank TV.  Of course, the news reports are blaming the bombs and casualties on the “teenage terrorists” associated with Molly and JD. They’re being set up by someone.

Lucy checks in with Fiona Stanton (Kate Burton) to discuss her actions. She explains she had to kill Nate since there were hybrids with bombs and lives at stake. Nate was in the way of their search. Fiona says it’s unfortunate, but unavoidable. She wants Molly Woods brought in dead or alive. See? I knew she was trouble.

Julie is still searching for Ethan when she runs into Toby. He assures her Ethan is safe with Molly.  She shares her fears about Lucy and the future of the humanichs program. She says she’s afraid to discuss her fears with Anna Schafer or Fiona Stanton, she doesn’t trust them.

As she heads to her car, Lucy walks up to her and asks where Molly is. Julie tells her she saw Molly die. Lucy warns Julie that she’d better not be lying.

Back in the bunker, all are sleeping except JD. Molly wakes to find him watching her. She answers JD’s questions about her transformation the best she can but doesn’t say too much about her visions of him. Her phone vibrates; it’s Toby and he wants to meet. JD doesn’t totally trust Toby, but gives Molly a cloak of invisibility! Well, it’s a cloak, anyway, and it throws off any facial recognition software. Before she leaves, JD pulls her close and…drumroll…kisses her! Finally! 10 episodes into Extant, I thought there might be a bit more passion! What happened to hot-pants Molly? Can you say letdown? I can.

She leaves to meet Toby. He tells her a humanich killed Nate; strictly against their programming. Molly is stunned. He believes John’s old partner, Nicolas Calderone, is now hijacking the humanich program. He has access to the Threat Assessment computer, TAALR, which he and John created. After a falling out with John, Calderon has gone rogue and may even be responsible for John’s death. Toby vows to take him and the whole humanichs program down, and Molly hugs him with gratitude. This is the Toby she knows, the good man. Molly heads back to the bunker where Ethan and JD are playing Texas Hold ’em for Fritos. When Molly arrives, Ethan isn’t feeling well, he’s working at two hundred percent capacity, so Molly shuts him down and she and JD take him to Julie’s. They tell Terra they will be back in 2 hours. Julie performs diagnostics on Ethan and tells Molly and JD to have a drink and take a break.

While they wait, JD wants to know what vision Molly keeps seeing of him. She tells JD what she sees and tells him that she’s afraid it will come true. Julie calls Molly into the bedroom; Ethan is awake and tells Molly he has a message for her from John (Goran Visnjic).

Back at the GSC, Lucy has some video footage that Secretary Stanton might be interested in. It’s footage of Toby handing his gun to JD. Suddenly,TAALR stops answering questions from Toby and tells him his security clearance has been changed. On the security monitors, he sees Fiona  coming for him with guards to arrest him. He is handcuffed and brought to Fiona’s office. He tries to tell her that Calderone is taking over the humanichs and the humanichs will then take over the world. Fiona doesn’t believe him, tells him he’s committed treason and suggests he find a good lawyer and a psychiatrist. Toby is led out of the building in handcuffs by a young guard. He knocks the guard unconscious, unlocks his cuffs and takes off.

John’s message was programmed into Ethan in case he died and a humanich killed a human and breached the primary protocol. He says things will only get worse from here. He goes on to say Calderone is the one person who can stop this.

As Toby drives home, he notices a drone flying behind him. To his relief, it flies up and ahead of him. Toby places a call to Molly. As Molly answers her phone, the drone sends a missile back toward Toby’s car, striking dead center. Molly hears the explosion and screams Toby’s name. Damn, I was starting to really like that guy.

While Terra entertains herself with the hand-crank TV, there’s a loud knock at the back door. Terra opens it and there’s our angry Ares (Cleo Anthony), ready to take his little dove home, wherever that is.

With Toby dead, who can help Molly and JD now? Is this Calderon the savior or the devil…or both?  And will someone please shut Lucy down??

It's not looking very good for Molly and maybe all of humanity on Extant. Is there a bright side?