Extant wrapped up it’s season with a jumbo double-episode full of surprises. Special Contributor Tracey M. writes about how the human-hybrid-humanich conflict concludes and what she thought of the season. If you haven’t had a chance, go back and check out the rest of her excellent Extant recaps and take our poll below. – David F. 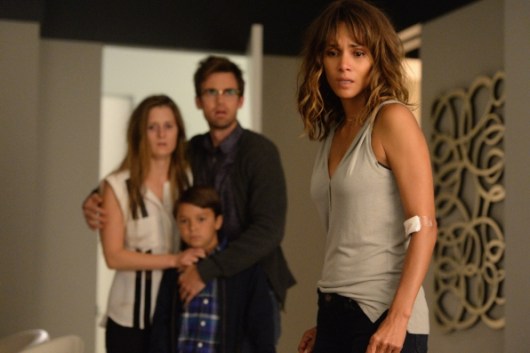 Our season finale begins in Fiona’s office. She on speakerphone with an impatient President of the United States. She (yes, she – glad the U.S. finally got over that hurdle) wants to be sure Fiona understands the world-wide gravity of the situation. Fiona assures Madame President that she does. The president sees Molly Woods as a terrorist, and wants her and JD dead or alive. Fiona summons Lucy to her office to rip her a new one, reminding her what a terrorist is and how they should be dealt with. Lucy assures her the hybrids are doing a thorough search, and one thousand more hybrids will be online the next day. Fiona just wants the mission accomplished. Lucy spends some alone-time with TAALR who informs her that Calderone gave Molly the amulet that could shut him down. That’s dangerous information in Lucy’s hands.

Meanwhile, at Julie’s apartment, a drunk Charlie (Tyler Hilton), believing Julie’s dead because of him, prepares to hang himself from the chandelier. Poor, sensitive Charlie kicks the table out from under him and starts swinging. Ethan, Molly and JD arrive just in time to pull Charlie out of his noose. Once they slap some sense into him, Molly and JD ask for his help. They need to find a way into the GSC.

Charlie suggests sending Ethan in, under the guise of a visit to Fiona. Once in her office, Fiona decides to take Ethan for some ice cream. Ethan tells her what they’ve learned about TAALR and his involvement in killing John and Toby. She asks for Molly’s location, but is instead handed a pair of virtual-reality glasses. Fiona puts them on, and is face to face with Molly. Molly confirms all that Ethan said, and implores Fiona to help shut TAALR down. She has the amulet created for such an emergency. TAALR is running it’s own agenda, creating multitudes of humanichs; it is no longer under human control. Before her location can be tracked, Molly ends the meeting. A waffling Fiona removes the glasses to discover Ethan has gone. He’s left a note; “Check the drone logs”.

Across town, JD’s ex-wife, Dorothy (Melina Kanakaredes), is shopping at a farmers’ market and overhears a couple of vendors complaining about the excessive security.The humanich army marches through Nazi-style, surveying each booth. Dorothy moves to another booth, and collides with a wounded, panicked Terra. She begs Dorothy to help her. Terra knows Dorothy knew her brother by looking into her with her golden eyes. Dorothy thinks of Adhu and flees the market with Terra. She phones JD for help. He comes for them and takes them back to Julie’s apartment.  Terra was grazed by a bullet, and JD attends to her wounds.

JD is grateful for Dorothy’s help and understanding. He leaves emergency instructions in case he doesn’t make it, to ensure that his daughter is taken care of. I don’t like the looks of this.

Back at the GSC, Fiona investigates the drone logs. The drone that struck Gen.Toby Shepard is clearly logged in, but strangely, there is no authorization for it. Fiona is puzzled, but hasn’t much time to think about it; she is notified that the latest batch of humanichs was sent out with a strain of the virus that will kill humans as well as hybrids. There’s no sign of the first strain of the virus, and no log of who made the switch.Of course it’s bitchy Lucy. She is upstairs, meeting with TAALR.   TAALR says that Madame Secretary Fiona Stanton can no longer be trusted since she’s been checking into the drone logs. Lucy is ready to terminate her, but TAALR says it has other uses for her first.

Molly and JD go back and forth about Molly’s vision of JD mortally wounded. She wants him to stay safe and not get involved. He argues that it’s his war as much as hers and of course, this leads to a passionate kiss. While doing the tongue-tango, Molly’s virtual-reality goggles ring – it’s Fiona. She warns Molly about the new virus strain. She says the humanichs have gone offline, and asks Molly to shut TAALR down. She has no other option. Any other contact would alert TAALR.

Ethan tells Charlie that he can track Julie, she has a robotic leg. They follow GPS signals to Julie, who’s down to one-percent oxygen, and is losing consciousness. Downstairs, in the bottom of a stack of crates, Charlie pries open the crate holding Julie. She gasps for air. Charlie tells her they must hurry to get out, drones are everywhere.

Lucy and her team have killed Fiona and her group. TAALR discovered the attempt to shut it down and implemented security measures. The humanichs are taking over the GSC and Lucy has created a humanich doppleganger of Molly.

Back at the apartment, JD is fooled by humanich Molly, who shoots him in the side, just like in Molly’s vision.  He lays there bleeding. Molly returns to find him unconscious and shot, and transfuses some of her blood into him.  As he comes to, he reaches for his gun, not trusting Molly. She tells him about the humanich replica. Later, JD notices his wound is healing. He asks Molly if he has her blood, what will happen to him .He’s scared, but Molly reassures him, hybrid life isn’t too bad.

She tells him she and Terra have enlisted the help of Ares (Cleo Anthony) and the other hybrids to help combatting TAALR’s technology. Her biggest fear is that shutting down TAALR will shut Ethan down as well. Ethan tells her he wants to make that decision for himself. He too wants to make sacrifices for the greater good.

Molly, JD, Charlie and Ethan all get ready to take TAALR down. For access to the building, Ethan has made one of his “spiders” explosive.

As Ares and the gang use their combined energy to shut down power, Molly, JD and Charlie – who has the amulet –  enter the GSC. They disarm any guards they come across in the dark. They pry open the doors and head inside. Julie is in the van with Ethan, trying to install an inoculation of sorts into Ethan.

Molly gets a message from Ares, all of the hybrids have been taken down by the guards. As the three wander the corridors, walls slide shut and cut them off from each other.  Lucy, humanich-Molly and two other humanichs draw their weapons and head toward the group.

TAALR has turned security cameras on all three, to keep track of their progress and keep the humanichs informed. Charlie finds the control room, but is shot in the shoulder by Lucy before he can enter it. Lucy has taken the amulet from Charlie. TAALR instructs her to destroy the amulet by ingesting it. Lucy pours the contents down her throat, but nothing happens. She demands Charlie give her the real amulet. He reminds her that he never installed limiters in her and she can make a choice for herself. She doesn’t have to follow TAALR’s path.

Molly -who has the real amulet- decodes binary messages encoded in the floor and finds her way to the control room, where TAALR asks her if she’s ready to destroy John’s work; doesn’t she realize it’s time for the extinction of humans. She’s confronted by Molly 2.0. The two fight, and the humanich starts to strangle her. Real Molly drops the amulet. She reaches behind her twin, pulling the humanich’s  control core out. Lucy enters and picks up the amulet. She hands it to Molly and tells her to use it. Molly plugs the amulet into the control board, and Lucy, along with all the humanichs start to power down. Charlie makes his way to Molly, and sees a dying Lucy. He cradles her head in his lap. She tells him she finally feels something – freedom. (Sob. I’ve hated her for most of the past several episodes, but I did feel for Lucy here)  TAALR goes dark, and Molly yells for them all to get out of the building. Molly is devastated, thinking Ethan is gone.  He runs into her arms when she steps outside, much to her relief.

Molly testifies in front of Congress again, but this time, she tells the truth. Then she introduces them all to Ares, not so different from them after all. But in the lab, a humanich hand flexes under its cover, and in the coffee shop below, a barista announces a latte is ready for “Taaler?” In a hat, and sunglasses, TAALR steps up to retrieve his beverage.

Is this the end of our story?  Are all humanichs truly gone? Who is TAALR, really? Did a Starbucks barista actually get a name right? And have we seen the last of Dr. Molly Woods?

I loved Extant’s transformation of Molly this season from a conflicted scientist into a real warrior. CBS hasn’t announced its plans for the show, but I’m hoping it’s back next year.

What did you think about the season? Let me know in the comments below.

There's big trouble for the human race as the humanichs are taking orders from a higher power on this week's...