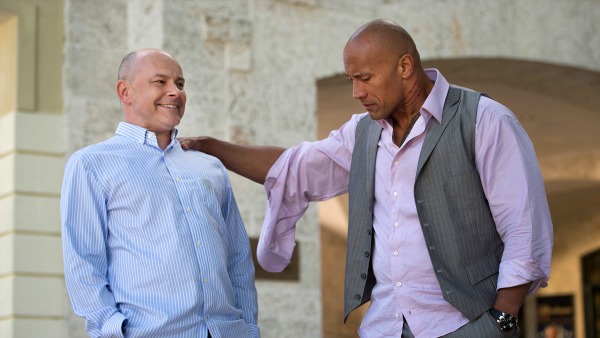 It’s the season finale and while season two of Ballers has wrapped up, things don’t exactly have that happily-ever-after-until-next- season feel to them. There aren’t any real cliff-hangers at the end of this episode but there are quite a few issues left unsolved. As expected Spencer is the one who’s future is the most in question. Let’s have a look shall we?

Last week’s episode saw Spencer making his play to buy ASM from Old Man Anderson. He brought the old man one million bucks in a bag and promised to bring the rest, $11 million, in the form of a check. True to his word, this week Spencer shows up and hands Anderson a check for the promised amount – I guess Vernon came up with that $5 million that Spencer asked for. Ah, but there’s now a small monkey in the wrench, a fly in the ointment. Anderson decides to change the terms of the deal. He doesn’t want to sell, instead he wants to keep the business and offer Spencer a piece of the action for a fraction of the original asking price. There’s some back and forth and, after Spencer regains his cool, they finally agree on a 51/49 split of the profits. Of course you can figure out who got what percentage. The only hurdle is that Spencer has to sort out his problems with the NFL Players Association and get his agent’s registration.

In the meantime things seem to be settling down for Charles. It looks like he has managed to find a balance between his work-life and his home-life. Julie seems happy with the way things are going and that makes things easier for him. The recruit he brought to the Dolphins is working out just fine and GM Larry Siefert is so impressed with these efforts that he promotes Charles to the position of his top assistant. Now Charles will be responsible for scouting promising new talent and participating in discussions that will help the Dolphins come up with a winning strategy. Charles lights up when he hears the news. This, however, will mean that he will be spending a great deal more time on the road. Siefert tells Charles that he’s going to be on the road for the next two months straight scouting talent. “You’ll be on the road for the next couple months. That’s gonna be alright?” Seifert asks Charles. A visibly less enthused Charles simply tells him that it won’t be a problem.

Vernon and Reggie load up the car and head to Dallas for training camp. While on the road Vernon lets Reg know that he realizes that Reggie has grown more responsible in his role as Vernon’s assistant and he wants to put Reg on salary. When Reg says that it won’t be necessary, Vernon mentions that the salary is $3,000 a week. Upon hearing that Reggie ceases to voice his disapproval. On the practice field Vernon runs through some practice drills with an assistant coach when the boss shows up with the new draft pick who is vying for Vernon’s position. The boss wants to see the two men go up against each other in a practice drill. The drill involves a great deal of aggressive physical contact between the two men and Vernon is determined to show that he can still do the job. Upon seeing the way the scene was shot I couldn’t help comparing it to two slaves (the two black players), on a plantation, who were told to fight each other for the amusement of the master (the white boss). Sure, these two players are getting paid an obscene amount of money to do this but with the boss standing there with a huge grin on his face, obviously delighting in what he’s watching, I just couldn’t get that thought outta my mind.

Ricky is waiting on a call from one of the three teams he’s interested in playing for: Carolina, Green Bay and New England. When he gets the call it’s from New England, his first choice, and it looks like he now has a chance for that Hall of Fame shot that Dennis has been talking to him about. Rick meets up with some of his new teammates, including the quarterback, on the beach to run a few pass play drills. Everything seems to go well and Ricky appears to be happy with his choice. When super agent Jason Antolotti tells him that his contract with New England is only for one season and the price is only $1.5 million Ricky has pause for contemplation.

Spencer is getting a shot of pain medication for his hip when he gets a call from his contact at the Players Association. It seems that the process for his registration is being held up by one person. Spencer presses the contact to find out who this person is and where he can be found. The person is Eddie George who used to be one of Spencer’s closest friends until Spencer got him to go in on that bad real estate deal with Andre. Eddie filed a grievance against him and that is what has stopped the process. It seems that Eddie’s going to be at an NFL rookie symposium in Canton, OH. Spencer and Joe catch the next plane there to see if Spencer can reason with Eddie. They check into the hotel where the event is being held and Spencer gets Eddie’s room number. After pushing his way into Eddie’s room the two have words. Eddie tells Spencer that there is no way he’ll vote to approve Spencer’s registration. Eddie then poignantly describes what his life was like after he lost all of his money in Spencer’s investment. He talks about having to take hand-to-mouth jobs, living out of his car for a year and contemplating suicide. “I’m so grateful that I didn’t jump,” he tells Spencer. “Because now I have the chance to say fuck you Spencer! You have no right managing anybody’s money.” I can definitely feel for Eddie at this point. Spencer is left speechless after this. Defeat seems inevitable.

Upon hearing this news Joe suggests the only action available to those in their position — hit a first-class strip joint. There’s nothing like throwing away money that you don’t have in the company of a throng of fine, silicone-enhanced, half-naked women. They have such a good time that they end up getting thrown out of the joint. It’s at this point that Spencer seems to realize that he’s hit rock bottom. He’s got no prospects and nowhere to go. The next day Jay Glazer is hosting a seminar for the rookies and Joe gets Spencer some speaking time at the end of the program. Still looking much disheveled from the antics of the previous night Spencer takes the stage and speaks from his heart. He tells the rookies about the mistakes that he made during his career and he takes the opportunity to publicly apologize to Eddie, who’s also in the room, confessing how he lost Eddie’s money. He tells them that despite what they may think, they’re not invincible. Finally, he tells them that they need to be smart. After he leaves the stage Travis Mack, who’s in the audience, stands up and says that he respects what Spencer’s done and then he leads the crowd in a standing ovation. But Spencer has disappeared. The next time we see him he’s at the hospital ready to go in for his hip replacement surgery.

On Ballers, more details about Spencer’s past bad deal with Andre are finally revealed.