Things get real for Charles this week on Ballers as he has to adjust to the duties of his new position in the front office. Ricky finds that his opinion about his career path differs from that of his father’s. Joe has a surprise meeting and Spencer and Jason continue with their efforts to educate Travis Mack. 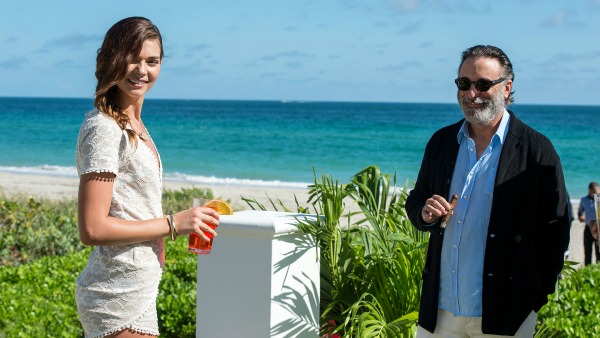 Larry Seifert gives Charles his first assignment in his new position with the front office — inform lineman Nick Kovac that his services are no longer needed by the Dolphins. He tosses Charles the phone but Charles thinks that this news would be better delivered in person. He shows up at Kovacs house to find that there’s a birthday party going on for the player’s young daughter. DAMN! Could his timing be any better. When he finally gets Kovac alone and prepares to drop the bomb Kovac describes how grateful he is to be in Miami where he has access to excellent medical care for his daughter. The little girl has a severe case of asthma and Kovacs has been really impressed with the treatment she’s been getting from her doctor. Charles, being a new father, is so touched by what he’s hearing that he doesn’t have the heart to tell Kovacs that he’s getting the ax. When he gets back in the car with his wife, Julie, he confesses that he couldn’t deliver the news to the player that he was being cut. Julie tells him, in no uncertain terms, that this is what the job is and he needs to come to grips with it. He has her turn the car around and goes back to finish what he started. Upon walking back into the house he finds that Kovacs has already heard the news from Seifert, whom he called right after Charles left. Kovacs goes off on Charles for not having the balls to tell him face to face. Charles talks to Kovacs, who’s in the middle of a raging fit over the news, and calms him down by apologizing first. He then says that Kovacs is still young, he still has a promising career ahead of him and that he’ll be able to play for a team that will appreciate him more than the Dolphins have.

Ricky, still pondering the offers from Buffalo and New Orleans, is discussing the matter with his father, Dennis, and TTD. Dennis is counseling his son to go where the money is but Ricky isn’t sure and still seems to be seriously considering New Orleans. TTD suggests that he go and spend some quiet time at the fun house and there maybe he can finally reach a concrete decision. Rick likes that suggestion and is spending some time in the pool when he’s joined by two female ‘advisors’ who show up to ‘help’ him sort out his options. In the middle of their intense conversation about the merits of moving to New Orleans, Ricky’s phone rings. It’s Jason telling him that New Orleans has taken its offer off the table because of a tweet that Dennis put out saying that his son should be about getting a big payday. This, of course, does nothing to strengthen the tenuous relationship between father and son. The next time we see Rick, he’s confronting his father over the issue and as we leave them things have come to blows.

Spencer, Jason and Travis Mack join TV sports analyst Mark Schlereth for a little fishing trip. Schlereth had been downplaying Travis’ draft prospects and Spencer thought the fishing trip would give them a chance to iron things out and upgrade his prospective client’s profile with the TV analyst. Well, he got that wrong. Travis is up in Schlereth’s face from the jump about the comments Schlereth made on his show. Spencer has to issue a stern rebuff in order to get Travis to back down. When Schlereth continues to doubt Travis’ ability Spencer has the boat captain detour to a stretch of beach so that he can prove that Travis has what it takes by proving that he can run. Even though he’s had quite a few beers, Travis completes a 40-yard dash with a 4.58 time. This impresses Schlereth enough so that has to rethink his opinion of the kid.

Joe has accepted an invite from a very attractive friend to attend a party at an exclusive palatial residence. There he spots the young lady who invited him. She reveals that the house belongs to Andre Allen and it was Andre who asked her to invite him. As if on cue, Andre sees Joe and waves him over. Not being one to waste time Andre cuts to the quick. He wants Joe to leave Anderson, and Spencer, and come work for him. Andre sweetens the deal by saying that he’ll increase Joe’s salary to a cool $500 grand, up from the $350 grand that he’s currently getting. Joe at first says he’ll think about it, but just before leaving the swanky little shindig he informs Andre that he’ll have to respectfully decline the offer. Andre drops some knowledge on Joe about Spencer’s past financial dealings and tells him to ask Spencer more in-depth questions about his financial past.

It looks like things are now going to get rather complicated between Spencer and Joe. Apparently somebody has ‘some ‘splaining’ to do. It could get very ugly indeed.

On this episode of Ballers, Spencer and Ricky are haunted by events and people from their past and these experiences...