Andrée H. who earned a Ph.D. in Bachelor in Paradise is here to share her wit, wisdom and vain hope that Chad will come back. I love him too, but the show seems to take issue with drunken verbal abuse and threats of murder. We’ll keep on believing, though. And with no further adieu, here’s Andrée!– Elaine F.

Chad has become an obsession for me. If they don’t name him The Bachelor I’m totally going to quit. If you aren’t already, I recommend following his Twitter His commentary on this show is my everything –We’ve got to get him on the recap team!

Andrée: Chris Harrison’s premature ejaculation jokes about Evan in the previews just made my entire week.

Elaine: Evan’s profession is looking at limp penises all day, he probably gets that a lot.

Andrée: Evan is interrupting Josh and Amanda mid lip-lock. What is he thinking? If I were Amanda, I’d of just said,  “Hell, no.” She looks mortified sitting at that dinner.

Elaine: And once again: Denied. Oh, man! Evan interrupted for a second time to tell Amanda about how Andi Dorfman’s book depicts Josh as emotionally abusive. That is believable; it’s mean how Josh is so intent on making Nick’s life miserable. That said, Evan is a tattle-tale and thinks this will get him actual tail. No, Evan, Amanda will not be turned on by gossip.

Andrée: Of course, we have to have the standard: “You are falling for the bad boy,” schtick. Chad is gone so Evan needed to find a new bear to poke. Let’s break Evan down: He’s a pussy man who likes to antagonize real men and he fixes dicks for a living. Perhaps he should be on Bear Island?

Elaine: In the gay community “bear” means something else. No shade, just fact.

Andrée: Oh, I know, that’s why I think he’d be happy on Bear Island. He’s clearly a cub. So according to Evan, people who like motivational quotes are covering a lot of pain? That’s a load of bs. 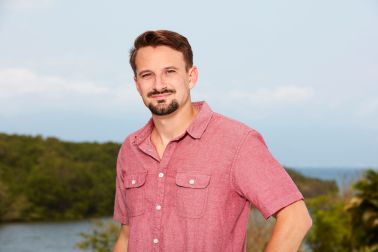 Andrée: Rose ceremony time. Lace will give her rose to Grant; that’s a given. Vinny and Izzy, yup. Twins and Jared. Amanda and Josh. Sarah and Daniel. Carly better give her rose to Nick because I would much rather have him around than Evan. Booo! She gave it to Evan. And he’s completely in love with her again. Oh, the other twin gets to give a rose. Well, I hope that she picks Nick. I don’t want Nick to leave. Yay, Haley picked Nick!  The twins served a purpose for once.

Elaine: Whew, I’m happy Nick is staying, but what the hell is up with Carly? I guess she had to make a strategic choice and stick with Evan because none of the men are into her.

Andrée: I don’t understand her thinking. You are probably right, though, if Carly gave Nick her rose she would have no chance of reciprocation the following week. Caila (the would-be Bachelorette, had Ben not told JoJo he loved her) has arrived. This should stir up some jealousy.

Elaine:  Oh, yeah. The men are going to lose their shit. Caila is so petite, bubbly and has that lovely dark hair. Wait, I think I just lost my shit over Caila. I don’t want Mr. TV Recaps giving me side-eye.

Andrée:  Caila and Jared  make a cute couple. I’m interested to see how this date goes. OMG, Jared is going to ditch the twin so he can go on the date with Caila, that’s great.

Elaine: Of course, he is. The twins are so basic.

Andrée: Side note: Jared got totally sucked into this whole messy thing last summer with the crying Kardashian, so it is good to see him stand his ground.

Elaine: The crying Kardashian stalked Jared, right? Is that the season when Carly’s heart was crushed? If so, I’ll watch it. I’m addicted to the drama.

Andrée: Oh yes, she’s been stalking him for a year. It’s also the season Carly’s heart was crushed. It’s got me hooked! Emily is hilarious, bitching about Caila being too perfect. Nothing like hating someone for no reason. Jealousy is an ugly look. Be hurt, but don’t hate.

Elaine: You just laid down some real philosophy.

Andrée: It’s the booze talking! Horseback riding on the beach! Now there is a fun date! I would fall in love on this date for sure. I really would like to see Jared end up with a nice girl and Caila seems like a really nice girl. And after her convenience store hot tub date on Ben’s season, she deserves nice things too.

Elaine: Caila probably has nightmares about being sandwiched between Ben and Kevin Hart at a Wal-Mart. The franchise owes her big time.

Elaine: Are you watching the previews again? That scene didn’t happen yet.

Andrée: HaHaHa! Seriously, though. A failed waitress in Vegas? This right here is why you don’t watch the previews. Chad didn’t knock Evan out and cause him to be in an ambulance, alcohol did. Lame.

Elaine: Chad has been gone for weeks. He’s not going suddenly to parachute in to beat up Evan. The medics are there because he drank too much? What a girly man he is. Evan probably had one wine spritzer. I’m quite certain that I’ve consumed far more alcohol while writing this recap and you don’t see me on a stretcher. Oh, dear God–Evan and Carly are touching each other.

Andrée: I have gone back twice and still can’t figure out why Lace is pissed at that rando. I think because she looked at her funny.

Andrée: Poor Nick. I hope a hottie shows up right now, and he gets with her.

Elaine: I wasn’t a fan, but I do feel kind of bad for him. Did he get cuter? When Josh breaks Amanda’s heart, I want to see her go running back to Nick so he can reject her. It would serve her right.

Andrée: Something about seeing a man constantly be the second choice somehow does make him cuter. He’s like the last puppy left at the pound; you just want to cuddle him. ASHLEY I!!! Kardashian Barbie!!!! YAY!!! She got a slightly dramatic entrance but nowhere as good as Chad’s. Get ready for a wave of tears baby! Ashley I. has arrived!!!

I’m trying to not watch the previews but it looks like this entire episode is going to be about crushing...