Bachelor In Paradise: Week 5, Night 2 and After Paradise

There are so many things to love about Canada, poutine, their hunky prime minister and Andrée H., an expat and Bachelor philosopher. Take it away, Andrée! — Elaine G.

Here we go! Tonight should be really juicy! The final new arrivals always are!! Plus, I am like 100% sure positive we’ll be getting the new Bachelor announcement on After Paradise tonight!!

Andrée: Two new girls tonight? Squee! I know I shouldn’t watch the previews but I caught that bit before I tuned out. You know I have a problem when I can’t stop myself from singing along to the opening credits. My maid must think I have a serious mental issue. Okay Ashley saying that Caila is an attention-seeker is a bit funny. Wait, when did Caila tell Ashley that she doesn’t like Jared? I didn’t hear that. Ashley is just making crap up. Now she is sobbing again. Jared is so stupid. He falls for it every time.

Elaine: Called it, Ashley played herself by pushing Caila out. I love that Caila got in a dig about not needing to be on TV. Ha! Girl, I know you have big plans. And they all involve working your way back into this franchise.

Andrée: Jared is going to leave. Well, that’s good at least. If he has actual feelings for Caila it is the right thing to do. That’s funny she has already left. He is chasing her down. Aww. That’s cool. I guess he doesn’t care about his luggage. Or a free engagement ring. *shakes head*

Elaine: What woman doesn’t appreciate a man running to catch up with her when she’s leaving? That car was moving mighty slow, though. My girl, Caila, knows what she’s doing. No matter what you say, I remain Team Caila. I’m glad that they aren’t getting engaged. That would be a bit much at this stage.

Andrée: Evan is now telling the story to everyone else all wrong. Jared never said: “I am never talking to you again.” Ugh. It’s like watching a game of telephone play out on the TV screen.

Elaine: I wish Jared would have said that but he’s warmed to his role as professional stalk-ee

Andrée: If she wants Wells, Ashley best stop crying. I didn’t realize all of that went down while Wells was still on his date. Man, Ashley cracked SO fast.

Elaine: I wish the show would move on and get a new crackpot. I don’t know how many more hate-watch seasons, she’s got left. I wonder if that thing Chad said about the producers promising her a show is true. That wouldn’t surprise me. On the other hand, they could just be leading her on. It’s time for a new nutter. Lace had her moment, let’s get someone new. I hope the replacement is also a stalker. Clingy girls and douchey guys are what makes this show. BTW, I took your advice and I’m watching S2. So far, it seems douche-heavy which is always nice.

Andrée: This conversation between Ashley and Wells is so awkward. I would not want to be Jami treading on Ashley’s new territory. I love how Ashley says Wells is the guy that she got over Jared for. She is in no way over Jared.

Elaine:  Despite what, I just said ,I do enjoy the way Ashley I. beclowns herself. I wouldn’t mind her stalking a new guy.

Andrée: Lauren from Ben’s season–wasn’t she the Chicken Suit kindergarten teacher? Yes, she definitely is. Meh, she is boring. I’m surprised they saved her for the last week. Normally,  they save serious hotties for the end. I would enjoy it if she stole Lamp Guy from Izzy though, she deserves a little karma.

Elaine: Oh, right. Chicken Suit kindergarten teacher, I don’t give a cluck about her…

Andrée: Another girl! YES! How fun is this episode? Oh, a double-date! Fun! There has been so many double dates this time around! Ashley’s got a full hate-on. And Wells is going on a third date! What a dirty dog. The kindergarten teacher took Izzy’s man, I do like that.

Elaine: I remember this girl. I think she spoke Russian on her limo entrance and kind of worked a phony-baloney language barrier for a while. I respect that. Wells, is cute. I don’t blame the girls for going after him. Not to mention, it’s smarter than going for one of the guys who has been there for a while.

Elaine: I will not acknowledge him.

Andrée: Nick is like the father figure of Bachelor in Paradise. Such a different look for him. I like non-villainous Nick. 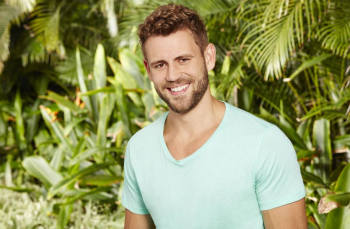 Elaine: He outgrew that. I think he’s ready to exit the franchise with dignity and likeability. Hint, hint, Ashley!

Andrée: Back to the date, Wells is now making out with the Russian. That’s three girls in like 48 hours, maybe 72. Gingivitis is coming to mind.  Eww, Evan smacked Carly’s ass and now they are making out. I need to go rinse my eyes out with bleach. Eww! Put your disgusting boner away.

Elaine: Nope, not watching, not acknowledging.

Andrée: I want Amanda’s Hot Sauce tank top. Wow, she gets a date with Josh and it’s a fancy dinner of…pizza. They spent a whole lot on that one. I am not even listening to this date. Josh’s lips keep moving and all I hear is the sound that Charlie Brown’s teacher makes. And I am distracted by the way they did the table runner, with the table in a diamond shape having the runner come over the corners. I like that. Looks cute without trying too hard.

Elaine: What do you think Chad would say about Josh?

Andrée: Wells is bad from his third date LOL. Should be fun watching him juggle. Ashley has upgraded the new girl from “Eurotrash” to a “Russian hooker.” It’s fun watching three girls fight over Wells,

Elaine: Ashley’s technique is pretending to be a virgin, wailing and fake crying, stalking and saying really mean things about the other girls.

Andrée: I know I shouldn’t watch the previews but I am surprised to see Nick looking at engagement rings. He and Jen strike me as friends at best. I don’t get it. Oh God, it looks like he proposes and she says no,  he’s crying on a beach. Noooooo. Why is Nick smashing a lamp? Is he trying to be Chad? You are not Chad.

Andrée: Squee! It’s time for After Paradise! I hope you are actually going to watch it this time! You don’t know all the goodness you are missing out on. Plus, we finally get to find out who the Bachelor is.

Elaine: Nope. Not going to watch.

Andrée: Ok, it should be time for the Bachelor announcement now. Yay! I hope it’s Chad. I am sending Chad vibes.

Elaine: You know that’s not going to happen. This show is totally biased against hot, virile, emotionally unstable heartthrobs. I’ll watch this and prepare to be underwhelmed.

Elaine: Excuse me while I lift my jaw up off the floor. Wow! Wow! Wowzer! I am stunned and thrilled! Josh cries into his green smoothie. So we don’t get another bland eunuch. I will be watching with genuine interest. Go, Nick, go!

I am so happy for Nick! He is finally going to find love! I think my feelings towards Nick really changed during his hometown date on Kaitlyn’s season (and by hometown I mean meeting his family at a resort, not in his hometown. Shawn’s family was also staying at the resort, why I still do not know.) For the first time in like 10 years, I am stoked beyond belief for next season of The Bachelor.

We are right back to Jared wanting to kill himself. He is so done with having a stalker. I guess...