Get ready for Andrée H. Our Bachelor Nation analyst and proud Canadian ambassador breaks down Bachelor in Paradise’s “Most (insert adjective) episode EVER.” Take it away, Andrée!

I know this will be the last moments of Chad for this summer, so I am ready to savor it!! Of course, I’ll still be following him on Snapchat! I was excited for the weekend to be over and this episode to be on! I know I’ll always have social media Chad, but it’s not the same as the romanticized Bachelorette Chad.

Andrée: I don’t know this Josh Murray guy, but he seems like a jerk, so he could make things more interesting. Poor Chad he is such a wreck. I wonder if he is always this drunk or if it’s solely because he’s in a crazed mourning period.

Elaine: I can’t believe that we only got to see Chad on the car ride home. I’m a Chad apologist. It’s the mourning. He’s in that self-destructive mode. He’s also in that drinks-too-much mode. I don’t know who these people are. Question: Do only castoffs appear on this show? Can a past Bachelor or Bachelorette be on the show?

Andrée: You know who Chad is and he’s the most important guy! I am pretty sure no past winners, just past rejectees.

Elaine: That is too bad for JoJo. I’m inclined to believe your theory that Jordan loves ambition, not poor JoJo.

Andrée: You should see Chad’s Twitter on that–he keeps posting news stories about how Jordan has no interest in JoJo — it’s great! If there are too many girls, they should just get rid of Carly. I can’t stand her. New girl — Leah, I do not remember her from Ben’s season. I love that she wants to date Chad, though! Sorry girl, no Chad Bear for you!

Elaine: Which one is Carly? I don’t remember Leah; she’s pretty in a pretty kind of way. 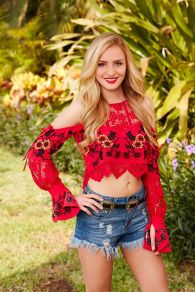 Andrée: Carly is the very forgettable short blonde girl. Leah is very pretty, so, of course, the twins have serious jealousy issues.

Elaine: Those Bootleg Barbies have a lot of nerve mocking anyone’s plastic surgery.

Elaine: The franchise uses all of its date budget for plane rides, fireworks and hot tubs on The Bachelor/Bachelorette. So Nick is the catch-of-the-day, I guess.

Nick seems to have made a career out of being part of the franchise. Both Leah and Amanda are into Nick, and the other girls just sit around giggling about him;  Leah selected Nick to go out on a date and then the show gave us a twist, Nick gets to choose any girl for a same-night date. Oooh, Nick picks Amanda instead of Leah! All of these blondes look the same to me so maybe he can’t tell them apart either. Leah thought she had a claim on him. Buuurn!

Andrée: I love this show because it’s a lot like real life. You have an amazing date, then he’s boinking the next girl. I’m surprised they didn’t bring on another guy to replace Chad. Now we know — two bitches getting chopped.

Elaine: Hopefully it’s one of the random girls who I don’t recognize or care about. Wow, Amanda and Nick are kissing, Leah is walking around crying like she just broke up with her boyfriend. Girl, you have only been there one day.

Andrée: One-armed girl getting some action. I’d be happy for her but she took away Chad, so I hate her.

Elaine: I did feel bad for Sarah her during her season; the show kept throwing her into situations that were suited for two arms like roller derby. That said, I was never on Team Sarah, and she was an anti-Chad ringleader, so it would be satisfying to see her go next.

Andrée: Must feel nice for Nick to finally get to reject a woman.

Elaine: Right, he’s been a rejected a few times. I remember that much. He doesn’t seem as much of a jackass now. Leah is a catty stalker. Her mission in life is to act all Fatal Attraction with Nick and say mean things about Amanda. She’s coming off as desperate, which would seem to be a turn-off but I think these guys are into whichever one is always DTF.

Andrée: In all honesty though if I were there, I’d be looking for the DTF ones too! One fun thing I like about this show is they save some of the desirables ’till l late in the show, so the people holding out for them have to suck up to losers for roses. It’s great.

Elaine: I like the way you give me tutorials on this show.

Andrée: I do what I can to keep you intrigued 😀

The Canadian is the best. “I’m an eagle and I’m not going to drop down to pigeon level.” He’s my new fave. Daniel for the win.

Elaine: Daniel is one of the most interesting ones so far. I will always appreciate him for advising Chad not to act like Hitler, Mussolini or Trump.

God, Carly sucks. So does Evan. If they keep each other around all summer, I’ll cry.

Elaine: I just don’t see it with Evan. He hasn’t convinced me that he’s into women.

Andrée: I wouldn’t mind seeing Evan get booted to Fluffer Island. Make his job getting the other guys ready for some on-camera sex. I think he’d be happy there. Kick off the one-armed girl so we can have Chad back!! Vinny didn’t pick her so we are one step closer to her being gone!

Elaine: I love my chocolate sister, Jubilee and wanted her to find love–at least until the season wraps. Alas, she refuses to understand that you have to be a needy, stalkerish, alcoholic slut to get anywhere in Paradise. Grace and dignity will get you nowhere, girl. She even cries pretty. God, I love her. 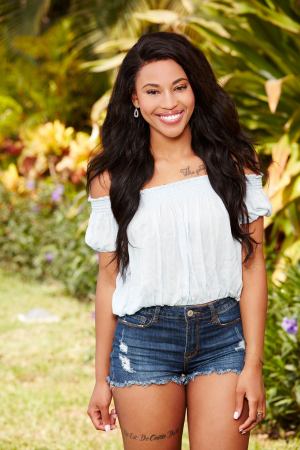 I liked Jared, from what I can remember of him, but choosing the Doublemint Twins over Jubilee, makes him namby-pamby. Or maybe he recognizes that Jubilee is a lady and he can’t measure up. I’m actually sorry to see Leah go. It would be nice to have someone to hate-watch. I hope she is replaced by another haughty hater. I’ll miss her pathetic attempts to compete with Amanda. She cries ugly.

Andrée: We don’t really have any excellent villainesses on this season yet, I suppose maybe Lace.

Jubilee needed to have made her intentions known. Keeping quiet on this show will get you nowhere.

I didn’t watch Andi’s season because Andi sucks balls, but apparently this Josh dude and Nick were the final two and Josh crushed him, so there is your background ha-ha.

Elaine: I watched Andi’s season. It was the pits. If I remember correctly, Nick was the jerk. I probably rooted for Josh, but I don’t remember him at all.

Andrée: I definitely remember Nick as being the guy who had sex with Kaitlyn on her season–I will never, ever forget that. Nor will Shawn.

Josh goes straight for Nick’s girl, of course. He seems pretty douchey. He might be a good Chad replacement.

Elaine: Nope. It takes more than douchiness to replace my Chad–who is simply misunderstood. I bet Josh eats more carbs than protein and doesn’t bring the air of danger that he might lovingly hog tie you in a cabin. Josh is no Chad.

Andrée: Josh, however, has some sort of life-long wish to completely humiliate another dude on TV, and I can totally get behind that.

At least Amanda and Josh get to go on a boat for their date. It feels like a portion of a Bachelor date at least.

Andrée: I am too, Nick is like a little lost puppy just searching for someone to take him in.

Andi wrote a tell-all. Why does that not surprise me? I thought Nick’s answer about the book seemed sly. I know nothing about it so I can’t really comment past that.

Elaine: Now I want to read it. Kind of. And by that I mean, just read the passages about Josh since Nick describes Josh’s portrayal as “aggressive” and “disturbing.”

Andrée: Me too, but I don’t want to support Andi or acknowledge her existence, so I refuse! Andi’s season is my proof that I can and will abstain from my favorite show due to terrible casting. So let’s see a decent Bachelor — aka The Chad.

Here we go, another date, but it’s with two losers I  hate–Carly and Evan–so I probably won’t comment. HAHAHAHA their date is a competition to kiss with habaneros in their mouths, Okay, okay, I’ll comment: They are literally torturing the losers. I love this show.

Elaine: I’m starting to see what makes this show such trashy goodness.

Andrée:  Eat those peppers and suffer. SUFFER. In all fairness, it’s good she isn’t doing this with someone she wants to kiss because this would probably ruin wanting to kiss that person again forever. EWWWW she’s kissing him. So gross. Their noses are running. Yuck. At least they get to leave with a world record under their belts, I guess.

Elaine: If I remembered Carly, I’d be disappointed in her.

Andrée: Funny story: Last year she was one of the couples that hooked up on Day 1, then a week before it was all over, the dude just up and left. Carly was CONVINCED she was getting a proposal. She was guttered. I laughed my ass off.

She’s actually from the stupid farmer’s season, whatever the hell his name was. She was the “country singer” who took every opportunity to try to push her singing career in the name of putting her feelings out there. She couldn’t even remotely stand up against Kaitlyn and Britt. I hated her then and I hate her now. But I loved watching her have to eat hot peppers and kiss Evan. Kind of made up for no Chad — almost.

Another episode bites the dust! Hopefully, the backlash is more interesting than the woman stealing. Trying to not watch the previews, but knowing that Evan is going to try after the hottest commodity in the house while she’s mid-makeout does get me excited.

Bachelor in Paradise airs on Mondays and Tuesdays at 8/7c on ABC.

We’ve been promised fights, rage, ambulances, tears, multiple proposals, potential baby-making, and most of all, it’s the summer of Chad...