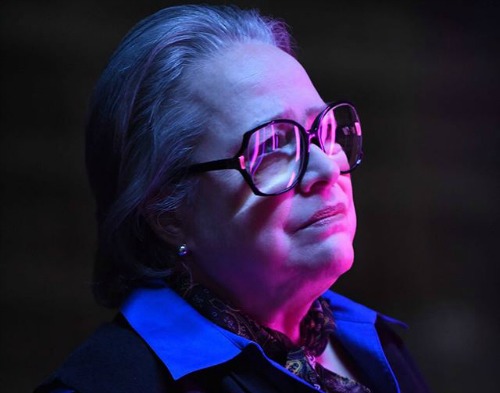 The Countess shows us a nifty way to utilize a sealed hallway, and Donovan and Ramona put their plans to the test. Alex is horrified by the chaos she’s caused. Read on to find out more about the latest American Horror Story: Hotel in Special Contributor Tracey M.’s recap. – David F.

The shock of discovering the sealed hallway has left the Countess quite shaken. With curiosity getting the better of her, the Countess has finally summoned the courage to investigate the sealed hallway. Flashlight in hand, she walks into an open room and finds dusty, old suitcases. Inside, there are both Rudy Valentino’s and Natasha Rambova’s clothes, and many photos of happier times. The Countess puts Rudy’s jacket on, still missing him, still feeling the pain of waiting at the train station all those years ago. Over 100 years old, the Countess decides it’s time to take care of herself, and she decides to use the space to exact her revenge. She hires a contractor to install a security door over the front of the hallway and security cameras inside. During the consultation, James comes along and assures Elizabeth she’ll get what she wants. She is furious with James, slapping his face and telling him she never wants to see him again. He pouts that he so looks forward to their monthly rendezvous. Then she hires a private investigator and gives him a photo of Rudy.

Will and The Countess discuss their upcoming wedding. Instead of the crowds of celebrities that surround Will Drake, the Countess insists they keep their ceremony simple. Her only request for the event is fresh Lilies of the Valley. After killing Tristan, she has the nerve to ask Liz to order her flowers. Liz basically gives her a “Bitch, please! Buy your own damn flowers!”. She is smoldering inside and hurting.

A couple of days before the wedding, it looks like Donovan has charmed his way back into Hotel Cortez and the Countess’ bed. After a lively romp, they devise a plan to exact her revenge. It seems the Countess has taken Donovan back. She tells him of her upcoming marriage to Will Drake. Donovan is shocked, but the Countess assures him she will be widowed soon after the ceremony.They make a pact to be true to one another, and then get rid of her enemies and they make love. Again.

After presenting Ramona with the porno-stud, a vampire version of a bottle of wine, Donovan tells her that he and the Countess are back together. He’s now able to work from the inside to advance their plan. He says that with her impending wedding to Drake, the Countess will be distracted.

Ramona drains some blood from the unfortunate actor, and pours two glasses. She shares her tale of how lost she was after the Countess killed her beloved. She couldn’t bear the loneliness and went home to her parents after not seeing them for 10 years. She grew concerned by their deterioration. After her mother passed away, her father’s Alzheimer’s worsened. One night, left alone, her father was gravely injured during a burglary. As he clung to life, Ramona slit her wrist and shared her gift with him. Sadly, the gift did nothing to help his Alzheimer’s. He was completely dependent on Ramona for the next 20 years. She came home one night to discover two corpses, and her dad just staring at the television, blood dribbling down his chin. She could no longer bear to see him so diminished. After giving him some Xanax, she put him in the bathtub, and ended his suffering. After her father passed, Ramona opened her eyes to the changes in the world around her. Her memories of what she had lost came back to her in a rush. All of those old feelings. Now she is hell-bent on destroying the Countess. She and Donovan toast to revenge.

Alex returns to her old neighborhood, to find her house full of vampire children and chewed bodies. They’re Max’s creations. Some of the children are sick. They can’t bear to drink blood and are weakening. She knows she was wrong to save Max the way she did, and now the “gift” is spreading like the plague. Stepping over a dead pizza delivery guy, she tries to convince the children to go with her to the Hotel Cortez for safety. She tells them there are others like them at the hotel. They ask her to leave, and when she refuses, they storm out. Hindsight is 20/20, eh, Alex? And where the heck is Scarlet?

Back in the Cortez again, Ramona approaches a sleeping Countess, knife drawn. Donovan encourages her to get closer then knocks Ramona out with a taser to the neck. He puts Ramona into a steel cage in the sealed hallway. Iris is there beside Donovan and is horrified to see him putting Ramona into one of the steel cages. Donovan points out the surrounding surveillance cameras and explains the Countess wants to watch her enemies suffer. She warns him again that he’s making a big mistake, but Donovan isn’t thinking with his “big” brain. Ramona awakes and also shouts after Donovan that he is a fool to think the Countess will let him live.

Thanks to some sleuthing by the private investigator, The Countess has finally located Rudy Valentino at a motel out of town. She knocks on the door, he opens it and she is immediately in his arms. It’s like they were never apart. Elizabeth wants to be with him. Only him. She plans to use Will’s money to transform the Cortez into their own private fortress against the modern world.  Rudy asks what Natasha’s role will be. Elizabeth explains she wants Rudy all to herself. She loved Natasha because he did. Rudy swears he would be okay if something were to happen to Natasha as long as he has Elizabeth to comfort him. Natasha breezes in from shopping, glad to see Elizabeth, her “little mouse”. Elizabeth invites her to the Cortez for a girls’ night. Who’s the mouse now, Natasha?

Will Drake’s wedding to the Countess is underway. When asked if there’s any reason the two should not be wed, their only witness, Liz Taylor speaks up, stating “Yes, because she’s a bitch with no conscience, no mercy, no soul”. A bit embarrassed, the Countess laughs off Liz’s remarks, suggesting that she’s drunk. The justice of the peace pronounces them husband and wife. They share a rather chaste kiss, and the Countess says unconvincingly how happy she is to be Mrs. Will Drake. Lachlan excuses himself and the Countess tells Will she will change into her travelling clothes while he begins celebrating at the bar. Liz is left standing alone with the Countess. She slowly approaches Liz, and hands her the bouquet. Her green eyes flash with anger and tears. The Countess tells Liz that she hopes she finds true love one day. Then she heads upstairs to change out of her gown.

James March meets Will at the bar, and recommends a toast to his good fortune. James commends Will on taking on a blended family, but he’s not talking about Lachlan. James takes Will to room 33, where he is freaked out by the bawling horror that is Bartholomew. He’s disgusted, and overheard by the Countess. She says she’s disappointed that Will won’t embrace her son the way she did Lachlan. For that, he will die, but he must suffer first. That puts a gleam in March’s eye, and Will is knocked unconscious. He awakens next to Ramona’s cage, and she warns him of their fate. She begs him to free her. He opens her cage, and leaves the room. They are sealed in the hallway with no exit. Will begins to panic. He screams for help. He tells Ramona they will starve, but she has no intention of starving. Ramona is on him like a cat. Miss Evers is there, watching and smiling, as the surveillance cameras capture it all. The Countess watches from her bed, thoroughly enjoying her wedding night.

This week on American Horror Story: Hotel, Special Contributor Tracey M. looks in on the show where we find out...