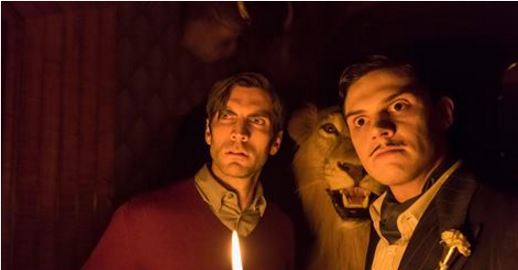 This week on American Horror Story: Hotel, Special Contributor Tracey M. looks in on the show where we find out that John Lowe is crazy as a fox as he gets closer to finding the Ten Commandments Killer and resident addict Sally helps us understand why she needs streak-proof mascara. – David F.

When we last saw Det. John Lowe, he was watching in horror as Wren stepped out into traffic, ending her immortality. Slowly, he approaches her body. There’s something familiar about Wren’s face. Suddenly John realizes where he saw her – at the Cortez in a glass coffin! He rushes to the hotel. Wren had said sometimes she would help the killer. The Cortez must be somehow be connected to the serial killings.

Liz Taylor is working the front desk today. She’s silently crying and dabbing at her eye make-up. Nevertheless, she keeps her dignity. John bursts in and grabs Liz by the shoulders. He screams in her face accusing all of them of covering for the killer and lying to him over and over. Liz slams John up against the wall and makes it clear that if he grabs her again, she will cut his throat in his sleep. It’s never a good idea to mess with Liz. Kitty has claws.

Sally is in the lobby and offers to help John find some of the answers he seeks. Liz hands John a gun (that would be the last thing I would hand him), suggesting he’ll need it if he finds what he’s looking for. Sally takes John to room 64, the former office and death site of James March. Sally promises there are answers behind the door, though she suggests going for a drink instead. John searches through the dark room, gun drawn. Sally tells John to look behind the armoire. He pulls it away from the wall and finds a vault. John opens the heavy door and is horrified to see it’s filled with displays of body parts under glass. They’re grotesque trophies, each jar labeled with the broken commandment it represents. Hearts and tongues, vocal cords, hands, teeth, a spleen, a brain, eyes. March’s work was never completed. John is shocked and horrified by the display, and asks Sally who let this maniac into the hotel. Sally tells him the killer has a key. Images swirl before his eyes, flashes of crime scenes, broken bodies, vague memories of brutal violence. And so much blood.

He sees himself covered in blood and allowing Miss Evers, always the diligent laundress, to help him off with his shirt. Sally sadly admits to John that it’s him, He is the Ten Commandments killer and she promises him his work is almost done. He shouts that it’s impossible! His knees buckle as Sally tries to comfort him. The dude is pretty messed up: he’s been chasing his own tail the whole time.

We go back to 2010, to the discovery of the unfortunate asphyxiation family. John goes to a local bar to try to drink away the images of those children. By closing time, he’s half-cocked but not ready to call it a night. John heads to the bar at the Cortez, and continues his bender. Donovan’s there and at last call he approaches John, suggesting there’s an afterparty he should attend.

James March has just sat down for his monthly dinner with the Countess in suite 78. The shrill doorbell has James March livid and ranting comically in his 1930’s-style staccato, incensed that his monthly dinner with the Countess has been interrupted. Donovan brings John in and March sees something he likes. The Countess is licking her chops as well, but March excuses Donovan and the Countess so he can speak with John alone. He wants to hear every gory detail John can remember from his work as a detective. March is fascinated. They drink absinthe and John’s glass is never empty. March prods John, wondering if he ever has the desire to hurt perpetrators. Days pass as John and James continue to talk in the timeless Cortez. March likes the darkness he sees in John but thinks John needs a little push to send him over the edge. He enlists the Countess to abduct Holden so John can reach his “full potential”.

John wakes two days later in his car, in front of his house. Alex is angry with him, but he promises he’ll take the family to the ill-fated carnival trip where Holden goes missing. For the next few years, John finds solace at the Cortez with March. And with Sally. She and John become lovers. March enlists Sally to keep tabs on John. He wants John to finish his masterpiece. Although it breaks Sally’s heart, she must make sure John completes March’s work. She made that bargain with March to keep the Addiction Demon (that weird, rapey creature we encountered in the first episode) away from her. James tells John he can see the pain he’s carrying around with him.

He visits March on the day that would have been Holden’s 10th birthday. March shows him photos of a young boy of about 10. A suspicious looking man had recently checked out of the Cortez leaving polaroids of the young boy behind. John finds his name in the hotel register and tracks him down. The man has an Oscar for sale on Craigslist, so he lets John in. John proceeds to show him the photos then beats him to death with said statue. It’s the same statue that’s later logged in as evidence at the police station. John’s immediately remorseful, and heads back to the hotel and tries hanging himself in a bathroom. March cuts him down just in time.

A haggard and unsteady John tries baring his soul at the morgue, over Wren’s body. He’s trying to confess his crimes to his partner, Andy Hahn, but Andy doesn’t believe him. He tells John he hasn’t been the same since Holden’s disappearance, and he needs time off, and therapy. Andy says that Alex met with him for coffee because she was so worried about him. John has embraced the crazy, accuses Hahn of wanting Alex, and kills him there in the morgue. Paper bag in hand, John heads back to the Cortez, and Iris is at the desk. She’s relieved that John now knows the truth about himself — she was never sure who she was speaking to. John heads up to room 64 and adds Andy’s penis to March’s trophy case; thou shalt not covet thy neighbor’s wife. Got it?!

Only two more commandments are left to complete, and James and John toast their masterpiece.

As the Cortez undergoes renovation, Will finds there's more to the hotel than he bargained for. John decides to have...