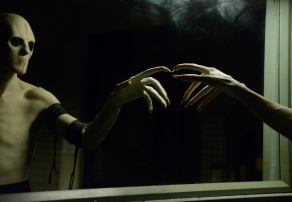 First Appearance: “For The Triumph of Evil”

Backstory: He kills those who have turned their back on a neighbor.

Recent Developments:  He came after Abbie for failing to confirm Jenny’s story about seeing Moloch in the woods and planned to kill her in her sleep. With the help of Ichabod and Mohawk shaman Seamus Deacon the owner of Geronimotors vehicle dealership, she defeated him.

Distinguishing Features: Hollow eyes and a veil of flesh where his mouth should be

Special Abilities: When targets fall asleep, they go into a trance, their eyes glazed with white. Guilt-ridden, they commit suicide.

The Four Who Speak as One Bio