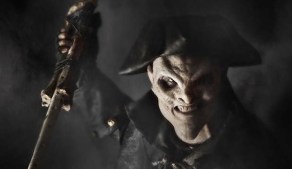 Backstory: When redcoats stationed at his home got handsy with his daughters, Daniel Forbes Lancaster (John Colton) hired the Piper to massacre the Brits. The Piper was a mortal who was granted superhuman strength when he made a deal to sell his soul. Instead of paying the Piper off, Lancaster killed the Piper. The Piper rose again as a vengeful demon and the Lancaster clan has been cursed since 1778. Every generation has lost a daughter to the Piper, who strikes on the child’s tenth birthday. The Piper uses the girls’ bones to make a flute.

Recent Developments: The Piper’s music lured Sara Lancaster (Abigail Rose Cornell) into the woods. With Hawley‘s help, she was found by Ichabod and Abbie. It turned out that Sara’s mother Beth (Francie Swift) willingly gave the girl to the Piper to spare her other three children. Hawley refused to help Crane and Mills kill the Piper, he was only interested in obtaining the fiend’s bone flute so that he could sell it. Crane and Lieutenant Mills entered the Piper’s creepy lair and killed him. Abbie also broke the flute so that Hawley wouldn’t have access to a dangerous weapon. Hawley still managed to sell the flute, which wound up in Henry‘s hands. Parrish ground up the bones as part of a nefarious plan.

The Weeping Lady is the type to point the finger at others.