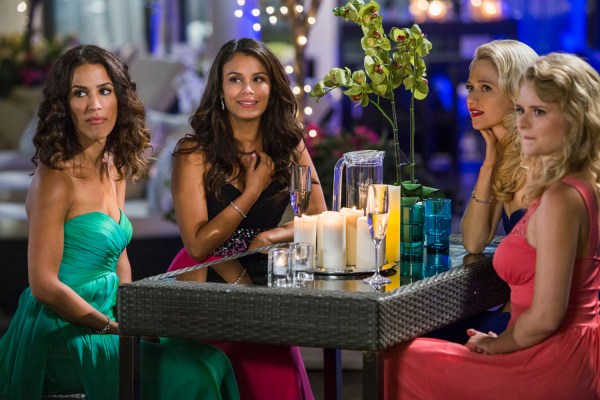 A disturbing frosted cake, fairytale princess carriage pulls up. Out steps Shamiqua, a beautiful woman who ups the “first impression factor” by playing the violin. She’s got the looks, she’s got the willingness to humiliate herself on national TV as an “Everlasting” contestant, she’s also got the melanin, which prompts producer Quinn’s King’s first freak out. It goes like this:

Quinn: She’s black. She can’t be the first one to make an arrival, Jay! Everyone who has ever watched one of these Bachelor/Bachelorette shows knows that she’s going to be sent home after a respectable three episodes, stick her in the middle of the pack. Or as Quinn puts it, “It’s not my fault America’s racist.” 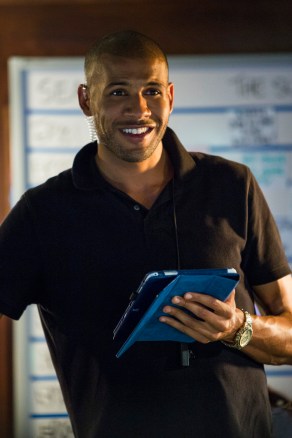 Jay stands up for Team Shamiqua
Photo courtesy of Lifetime

Me: Wow, right out of the gate? We’re not backing away from any of the dating show tropes, are we? I am so in.

UnREAL is executive produced by Marti Noxon who is also the executive producer of Girlfriends’ Guide to Divorce. Clearly she sits around thinking, “I’ve got to entertain Elaine.” Okay, maybe she doesn’t think that, but she’s responsible for two of my favorite 2015 shows. Full disclosure: Noxon produced and/or wrote for two of my TV obsessions, Buffy the Vampire Slayer and Angel, so I’m a totally biased fanlady. (She hasn’t yet sought a restraining order, so that’s good.)

From the control room/death star, Quinn cackles about Faith, the virgin and “horse-faced tear-jerker,” who is supposed to get her hopes up only to be sent home the first night in humiliation. Quinn is an evil genius, I like her. 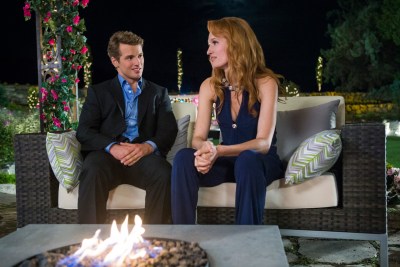 Rachel Goldberg, a former producer returns to the show, she’s also an evil genius. Rachel is kind of crazy, though. She suffered a break from actual reality during the previous season finale and stumbled into the scene raving like a loon. That’s because she has a modicum of shame about being evil. Of course, the Everlasting crew made Rachel’s emotional collapse work in their favor, they edited the scene to so it looked like one of the final two contestants went bonkers. (In fairness, she did have a tantrum when Rachel told her that she was the one about to get dumped, so it wasn’t all editing.) Rachel is an expert at manipulating a departing contestant until she sobs on camera. So that’s why the first-night cast-offs crack after a few hours at a cocktail party with the man who could be their husband. Rachel has her own agenda, she can slyly steer the circus performers to do the opposite of what Quinn wants. In this case, she persuades our bachelor, Adam Cromwell, to keep poor laughingstock Faith and send home the hot girl who Quinn intended to portray as the bitchy villainess.

Disney owns ABC and Lifetime, so it was a stroke of genius to air Lifetime’s UnREAL after The Bachelorette. It was delicious seeing it after two hours of hate-watching Kaitlyn and her bachelors. If you want to to read a post from someone who love-watches, the Bachelorette, head over to Andrée’s recap.

Click on this video for a preview of next week’s episode.