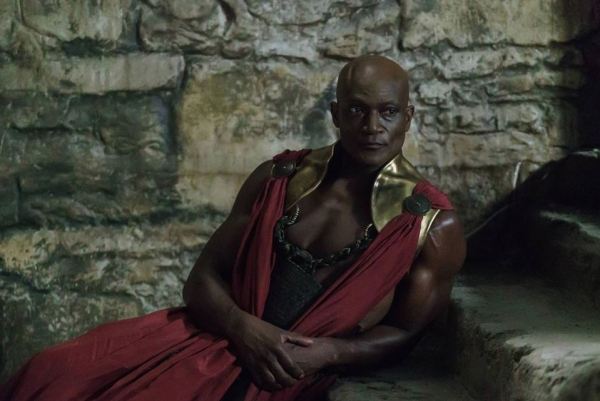 Jenny Mills is a smart, brave artifact hunter, but unfortunately, she fooled around with this shard and now appears to be under the control of Pandora, a fashionable but totally crazy pants goddess. FBI Agent Abbie Mills will not stand for this and is going to find her sister. Ichabod Crane goes wherever Abbie goes—most of the time—so it’s Team Witness to the rescue. Let’s go!

My girl Pandora has been stirring up all kinds of evil since she drifted into Sleepy Hollow with her to-die-for wardrobe and singing to herself, but we didn’t know what she was up to. It turns out that Little Miss Crazy Pants was on a mission to resurrect her husband, The Hidden One. Now, that damn sexy hobo, Agent Doe Eyes and newest Scooby Gang member, Joe Corbin—who is sweet on Jennie— have to fight another monster to get to Jenny. What’s that you say? Pandora’s man isn’t a monster? He’s a god? This is going to be a problem. This whole shard thingamajig is sucking Jennie’s energy.  It goes like this:

The Hidden One: Ugh, this world is so polluted. What’s going on here? It’s too hot. The water is dirty.”My eye… has bonded to a human?”

Pandora: Yes, she’s the sister of a Witness. Aren’t you proud of me?

The Hidden One: What do you mean Witnesses? Are those Witnesses still around? I hate Witnesses!

Pandora: You know what I hate? Getting you out of wherever you were and listening to all of this griping. And another thing, you look all ashy and jacked up so let’s just settle down and get to feeding on Jenny’s energy now.

At the FBI, Abbie is salty. She’d been tracking Atticus Nevins, who acquires rare objects for nefarious purposes and thought Sophie Foster was his henchwoman. In fact, Sophie is a fellow agent who was working undercover and Abbie’s boss/ex-boyfriend Agent Daniel Reynolds kept Abbie in the dark. Agent Mills doesn’t have time to answer their questions about why she and the MIA Jenny were investigating Nevins or Jenny’s whereabouts. She storms off and joins Crane and Joe in the woods. They hear Jenny scream, which is alarming. Jenny BAMF Mills does not scream. The Hidden One is feeding on her energy and is a little bit less of a dick to Pandora. Maybe he was just hangry. Word to the wise, If you plan to be buried somewhere for a thousand years or so, pack some snacks: string cheese, Lunchables, wasabi peas, maybe mandarin oranges.

Abbie blames herself for letting Jenny out of her sight. Crane is also upset because: “The Sisters Mills are as close to family as I have left.” Translation: I consented to you shooting my bratty middle-aged son, Henry Parish, and then I shivved my first wife to save you. You are my wife now and Jenny is my sister-in-law. Team Witness runs toward the sound and Ichabod finds something. It goes like this:

Ichabod: Hey look. The mummified guy we just saw left behind a rag or something. This writing is Sumerian, just like that tablet I brought back from Scotland.

Abbie: You mean that thing that referenced “The Destroyers?” I figured you picked that up at the duty-free shop and made up a cockamamie story to make me  think it was about us.

Ichabod: Maybe I did and maybe I didn’t make that up, but I’m telling you the truth now. The guy you just saw is a god. Research time!

Ichabod: Slow your roll, son. Rash behavior causes trouble. Remember that Abbie, don’t do anything rash. Do you hear me?

Abbie: Come again? I wasn’t listening, I was thinking of ways to do something rash.

The god’s name real name is Etu’ Ilu but you can still call him The Hidden One. The shard is his “all-seeing eye” blah, blah, blah, symbols.  A clue can be found on the back of dollar bills, ya’ll. It’s the Eye of Providence. Ben Frankin insisted the Masonic symbol be used on currency. To get vital Jenny-saving info they need the First Book of the Masonic Law, which can only be found in the oldest lodge house in the Masonic Order. Road trip to the university in Albany! The best thing in the world happens. At the university, the trio must contend with muscling their way through an old-school toga party. Do the kids today still do that? Doesn’t matter. It’s a red cup bash and little Abbie had to dodge through the boozy mayhem. Blah, blah, history, Paul Revere. Joe says to Ichabod: “Okay, I’m still not used to the way you name-drop.” Hee! They get what they need, there’s all kinds of blah, blah and then Abbie goes to FBI headquarters to question Atticus Nevins, who was working for Pandora. Too bad Pandora finds him first. She lets him know why his days, make that seconds, are numbered: “You see, my husband is back in town. And I need to do some housecleaning. I mean, think of how it would look if he found out that an insignificant worm like you used my box. It was a gift from my husband. Pandora appears to kill Nevins.

Abbie and Sophie look for Nevins, but Abbie finds Pandora, who is in an FBI uniform. Abbie pulls a gun on her, of course. Pandy says something quite intriguing: “You know, you don’t have to fight us, Abbie. There is a place for you two Witnesses in the new world. You have a right by lineage.” Hmmm. Pandora loves to mess with Abbie and mentions her “old wounds.” It’s a reference to Abbie’s encounter with Moloch when she was a teen and how it fractured the sisters’ relationship. Abbie heads to Daniel’s office and an argument ensues. He wants answers. Why did Jenny interject herself into an FBI investigation of Nevins? Why was Abby involved? Abbie won’t give him answers, but she does give him her badge and gun. Agent Doe Eyes loves whipping out guns, so that is serious. She probably has a whole stockpile at home, though. Daniel calls someone to say: “The asset we were cultivating, we just lost her.” Maybe, maybe not. He hasn’t made Abbie’s resignation official for now. Sophie drops by to mention that Abbie requested a whole bunch of stuff including night-vision goggles and explosives. Oh, Abbie. She plans ahead. Reynolds tasks Sophie with finding Agent Mills.

Abbie: You ready to fight some bad guys, Crane?

In the archives,  Joe is ready to go Wendigo again, thinking that in the form of a best, he can save Jenny. Crane talks him out of that extraordinarily bad idea: “Often, when love grips the heart, logic can abandon the mind.” The Forshadowing Fairy flutters by to note that this will likely apply to Abbie. In addition to weapons etc, Abbie also retrieved mystical stuff from Nevins’ belongings. A spell book that may be useful in regards to Pandora’s box. She also has the casing that can safely hold the shard’s energy.

At the lair, the Hidden One is busy draining Jenny. It agrees with him, he’s starting to look normal now and is quite attractive. Jenny is not doing so well. A mortal can’t handle this much power and her body will give out. Help is on the way, Joe and the Witnesses prepare to raid the lair. But first Ichabbie must talk about the battles they have won and insist on using the ominous phrase, “come what may.” Pandora strolls over to chide Ichabbie for dropping in uninvited. Little Abbie Oakley responds with bullets, naturally, they don’t impact Pandora. She is stunned by Ichabod’s taser, though. That makes no sense, but whatevs.

Abbie uses the casing but The Hidden One knocks it out of her hands and the case shatters. Pandora is busy making sure Crane leaves the box alone. The chocolate god is busy ignoring Joe’s bullets and a grenade. Abbie is busy using the pieces of the case to make sure the shard’s power leaves Jenny. Unfortunately, the shattered casing isn’t that useful. The thing will likely explode and bring down the cave. The door to Pandora’s magic tree opens and Abbie says this is “the only way” to save Jenny. Abbie has repeatedly told Crane that “there’s always another way” but time is of the essence, so we’ll let it slide.

Cliffhanger: As she walks into the tree, Ichabod tries to stop her but it’s too late. She calmly says: “Take care of each other.” Rather than his usual anguished “Leftenant,” Crane mixes it up with an anguished “Abbie.”